The Puget Sound Zen Center has finally found a permanent place to practice.

Since its beginning in 2003, this plucky itinerant sangha has wandered around Vashon Island near Seattle, first renting space in a room above an orthodontist office, then in a studio/garage, and finally in its current location at the synagogue Havurat Ee Shalom. 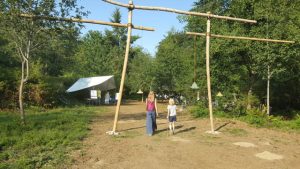 Elizabeth Fitterer and her son Grant walk through a gateway to the land, a structure ingeniously designed and built by Marcus Berg on the eve of the dedication.

Now the Zen Center’s members have committed to a collective vision of the future, by buying land that will someday support a purpose-built mediation hall (zendo), and gardens and trails for walking mediation.

At present the Zen Center’s new home does not look anything like the full vision. It is just a parcel of land, not quite 7 acres, off Vashon’s main road. The parcel includes a small wetland area, a half-acre clearing, lots of woodland, and many blackberries and other invasive species. All of this will provide ample opportunity for samu, or work practice.

The Zen Center purchased the land this May after extensive consultations between the Zen Center’s board, Abbot Koshin Cain, sangha members, and other interested parties.  Sangha members authorized the purchase after discussing financial concerns and viable alternatives at a public meeting. 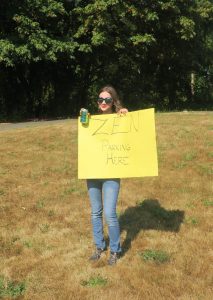 Purchasing this acreage is an ambitious undertaking for a sangha with only about 50 members. Their intention is to proceed slowly and deliberately to pay off the loan, before beginning any construction.

Exactly what the sangha will build on the land and when construction will start, is so far undetermined. The Zen Center will form a steering committee to solicit input from stakeholders prior to drafting building designs.

Meanwhile sangha members are meditating on Saturday mornings on the land, and walking its trails throughout September, from 8 a.m. to 9:30 a.m. 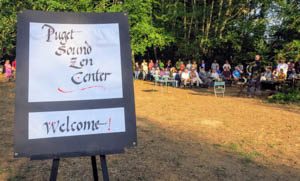 Since 2015 the two groups have been sharing the synagogue’s facility, as a creative way to find space to practice.

Puget Sound Zen Center members had been looking for a place to call home for many years. They considered several properties, but these were either out of reach financially, or were impracticable for various reasons.

“With every piece of property we looked at previously, we thought it might work, but at some point during our more extensive look something would just seem ‘off,’” said past board President Jim Hunziker. “One day I saw an ad for this piece of property, immediately drove to look at it, and it just ‘felt right.’ 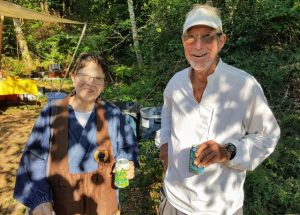 “As I asked others, everyone took to the property right away,” he said. “It had everything we were looking for: almost 7 acres of wooded land, good highway exposure for signage and easy access, a flat area that would be easy to build on, plus a large wooded area for meditation trails. “

The group celebrated their vision August 18 with an “open house,” and a land dedication ceremony. Abbot Cain spoke about the meaning of this land to the sangha.

“I hope this ground will be a place of spiritual practice for this generation and the next and the next after that,” he said, calling it “A place that will attract buildings and people, and gardens and gardeners, dreamers and doers.

“Over time, a place like this will gain meaning for those who practice here, those who visit here, and those who simply know it’s here.  It becomes a home for some, and an inspiration for others,” Cain said. “I hope we raise a beautiful building or two here over the next decade, but it will not be the buildings or the gardens that will matter most.  It will be the people who walk this property, who sit and study and cook and eat on it, and who get to know each other on it.  It will be the people who practice on this land — and the people whose lives they touch — that will matter most.”

Cain also expressed the sangha’s desire that the land have meaning for the public beyond the Zen Center’s membership, which he called “Our Vashon community, our friends on the mainland and beyond.”

“I expect this center to become a community resource that is used by Zens and many, many non-Zens,” he said. 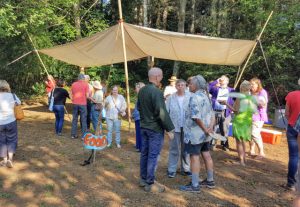 Abbot Koshin Cain thanks the many people who have donated money, time and labor to make the land purchase possible.

Vashon’s Zen Center has a tradition of seeking dharma from other faith groups at its Sunday program. Speakers from the Havurat Ee Shalom, the Russian Orthodox monastery, and the United Methodist church, as well as other Buddhist traditions, have offered words of encouragement and support.

“This center will be a place of practice that is near town, which is interwoven with the community it serves,” Cain said. “This land will also be a sanctuary, one that allows us to leave the world for a bit, to collect ourselves, to learn to see things from a different perspective, and then go out and work, and help others.”

To get there from here it will take time, energy, fundraising and vision. Past board member David Steel reflected on the power of vision

“Eleven years ago we had a two-day board retreat to establish goals and strategies for the next 20 years,” he said. “We covered sustainability, programs, community outreach and practice. Our facilitator challenged us to draft a 20-year vision. ‘Be expansive,’ he encouraged. ‘Don’t hold back,’ and we didn’t.  We formulated an image of what one sees and experiences when walking through the gates of our well-established Zen Center in 2027. Key to that 2007 vision was owning our own property, at least 5 acres.” 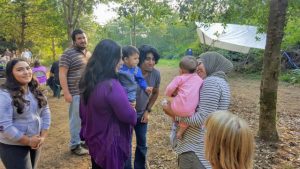 “A lot has happened since then,” Steel said. “We’ve moved twice. Our sangha size has grown and we have a children’s program, dharma study, and residential retreats all from seeds planted in 2007.”

Steel continued, “Earlier this year, after many property acquisition possibilities came and went, we found this land of 7 acres forested with alder, hemlock, fir and cedar–an approved septic design and water share. We received overwhelming sangha support to purchase.  Financing, through a friend of the sangha, came together in about two weeks.

“Some might call it a dream come true, but I like to think of it as a seed that has germinated,” Steel said. “I can hardly wait for the sprouts to appear.”

0
SHARES
Share
Posted Under: 2018, Fall, Sangha News
About the Author: Lynda Fitzpatrick
Lynda Fitzpatrick practices both Zen and vipassana meditation. She has been attending the Puget Sound Zen Center on Vashon Island, west of Seattle, for about eight years. She appreciates the robust can-do spirit of the Zen center on Vashon. She works as nurse in Seattle.