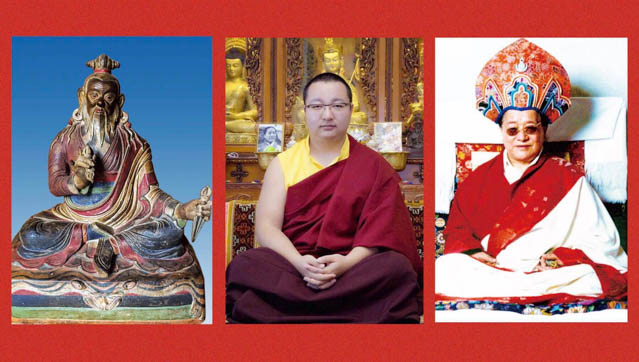 For nine days in July a great Tibetan Buddhist master, the rebirth of one of the greatest masters of the 20th century, toured Oregon raining down teachings and empowerments.

Just 28, His Holiness Dudjom Rinpoche, Sangye Pema Zhepa, is now head of the Dudjom lineage of the Nyingma school of Tibetan Buddhism. He is the recognized reincarnation of Dudjom Rinpoche, Jigdral Yeshe Dorje, who was one of the greatest masters to enter the West. 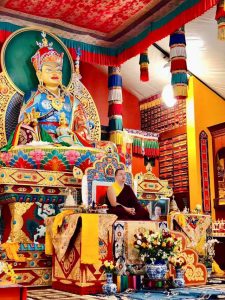 Sangye Pema Zhepa toured Oregon from July 6-15, presiding over a series of events in Ashland, Eugene, Corvallis and Newport. These stops were just part of Rinpoche’s first tour of North America, two months during which he conducted a constant stream of dharma activities throughout the continent.

This means that this was not the first visit to Oregon by this being. During the 1970s and ‘80s the previous  Dudjom Rinpoche, Jigdral Yeshe Dorje, then head of the Nyingma school of Tibetan Buddhism, visited Oregon several times.

During the 1970s and ‘80s Jigdral Yeshe Dorje’s travels and teachings were of seminal importance in introducing Vajrayana Buddhism to the West, as well as spreading Dudjom lineage practices outside Asia. His work led to the establishment of more than 80 Dudjom dharma institutions in North America.

Why Sangye Pema Zhepa’s visit was so important

The editor has encouraged me to step beyond my own personal reticence and shyness, and share a bit of my sense of the importance of this recent visit, and my experience of it.

During the visit it was like time became liquid, like entering and joining a radiant historical tableau in the annals of the holy Buddha dharma.  It was like meeting one person and meeting one’s own mind, finally going nowhere else.  It was edgeless, personal, generous, full of joy and moment, but deeply inexpressible.

This photo archive of Dudjom Rinpoche’s North America tour suggests the importance of his visit. Vajrayana Buddhism advances inseparably from the guru, from meeting and engaging unmistakably with the guru in a relationship of practice and faith. This is how the dharma is transmitted, and the true dharma face of realization is finally met.  This article, with all its facts and times, is just a sketch of how such an opportunity arrived in Oregon for us fortunate ones.

HH Dudjom Rinpoche’s first stop was in Ashland, Oregon, on July 6. Arriving from the south, at the Oregon border Rinpoche and his entourage had to be wary of the Klamathon forest fire, which was spreading rapidly and threatening the entire area. 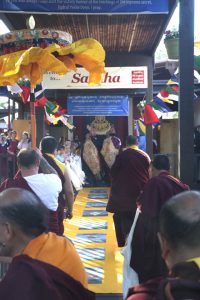 The next day he taught at the Ashland Hills Inn and Suites Hotel, the very place where his predecessor had taught and conferred blessings 38 years before. To about 375 attendees Rinpoche bestowed three dharma gifts: the Vajrayana empowerment of Chimed Sog Thig (deathless life essence), a Medicine Buddha blessing ceremony, and teachings on Phowa, transference of consciousness at the time of death. He was then presented with Tenshuk long-life offerings, by students of his previous incarnation.

Later that day, with the threat of fire subsiding, Rinpoche was able to visit the nearby Tashi Chöling Center for Buddhist Studies. His predecessor had originally visited and blessed the land in 1980, prior to construction of the complex.

Tashi Chöling, founded by Ven. Gyatrul Rinpoche, has functioned continuously since that time as a temple, a center for education, translation and retreat, and as spiritual home to the local sangha.

The next day Rinpoche traveled  north via a brief excursion to Crater Lake National Park, arriving in Eugene to preside over three days of events at Saraha Nyingma Buddhist Institute.

There he was greeted by a formal welcoming procession of young and old students bearing white offering scarves called khatas, as well as parasols and banners, while playing musical instruments. The procession concluded in the temple shrine, filling it to capacity of about 240 people.

Because July 8 was Dakini Day, Rinpoche ascended the teaching throne and led the assembly in chanting the practice known as Thrö Chung, accompanied by with chöd drums and bells. This is short sadhana practice of the wrathful wisdom dakini Thröma Nakmo, from the Dudjom lineage.

On both days individuals, and the assembled local sangha of Saraha Institute, made multiple long-life offerings to Rinpoche. 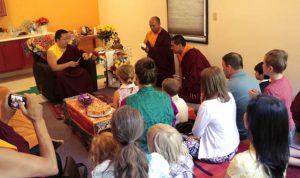 July 11 was a community event where students of Saraha Children’s School performed musical and dance offerings, followed by a group lunch. That day Rinpoche also conferred Buddhist refuge and naming ceremonies for families, children, and any members of the public who desired them.

Before leaving Saraha on July 12, Rinpoche gave parting advice to the local sangha.

“The basic positive qualities of a human being are the seeds of Buddhist practice,” he said. “If one is honest, straightforward, good-hearted, kind and compassionate, then the practices of Buddhism, including those of mantra and the Vajrayana, are very effective and work very well.  If one lacks the qualities of basic human goodness then these same techniques will have little effect.”

A detailed account of the origin of Saraha Institute, its unique building construction and its historical connection with HH Dudjom Rinpoche, can be found in a previous edition of Northwest Dharma News. 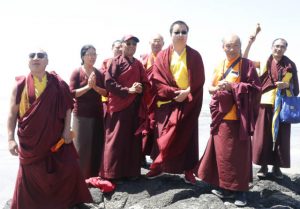 HH Dudjom Rinpoche and attending lamas on the beach in Yachats, Oregon.

Over the next two days Rinpoche visited and conferred blessings at the residences of three lamas who live locally, whom Rinpoche has known since his youth. These were Lama Jigme, Dzogchen Khenpo Choga Rinpoche, and Lama Tsering Gyaltsen of Corvallis, at whose place Rinpoche presented a teaching on the preliminary practices of Thröma Nakmo.

On July 14 Rinpoche traveled to Yachats, Oregon, where he was greeted by a spouting whale. Then he traveled on to Newport, Oregon, where offered a public teaching on bodhicitta, at the Newport Visual Arts center.

On the morning of July 15 HH Dudjom Rinpoche, Sangye Pema Zhepa, gave a last-minute oral transmission of a sacred Buddhist text at Portland International Airport. Then he departed Oregon for destinations onward.