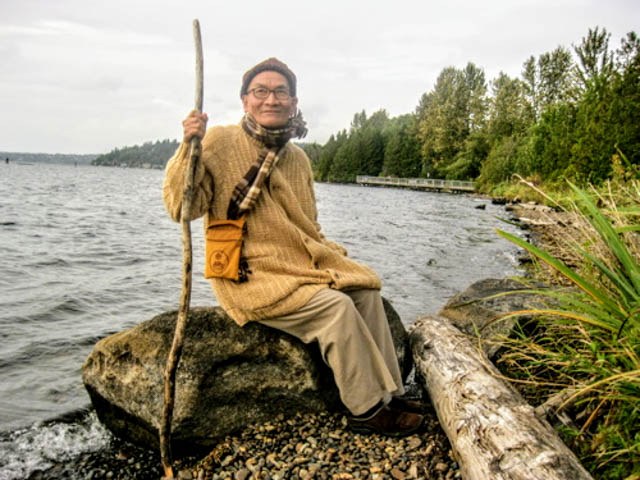 Thầy Kim brought grace to everything he did.

Recently we received the sad news of the death of Thầy Kim, (Thích Nguyên Kim), a well-known monk from Chùa Cổ Lâm Vietnamese temple in Seattle. He was 77.

Thầy Kim had developed a mysterious blood disease for which doctors were unable to find a cause.  As he became more ill, he had to spend more time in hospital, and he became intolerant of cold weather.

Needing warmth, in 2017 he relocated to Oceanside, California, where he passed away on July 30.

Kim was a warm man who befriended and influenced many of us here in the Seattle area and elsewhere. In his later years he lived in a small hut perched high up in the sculpture gardens of the Chùa Cổ Lâm temple, and he often invited people in for tea and conversation. His wit and wisdom will be sorely missed. 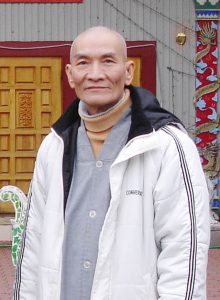 Thầy Kim visited many temples to teach the dhamma.

Kim arrived in the United States from Vietnam in 2001. He had been invited by the Most Venerable Thich Nguyen An (abbot of Chùa Cổ Lâm) to join him in Seattle to teach dharma to people of all ethnic backgrounds. Kim accepted this place as his last refuge.

Kim traveled in many countries including Canada, France, Germany and India, always diligently studying. He initially specialized in Zen meditation, but as he got older he primarily taught pure land dharma.

Kim wrote literally thousands of poems, some of which I was privileged to translate. Many of them can be seen on various websites, including this one.

Longing for the Pure Land

We come closer to the Departure Day

Every day, every minute, every second

The end of Autumn, leaves are falling everywhere

Clouds flying back to the mountains looking for their native land

This lonely body has been traveling rivers and oceans

Wondering when it can rejoin his Father Amitabha’s land

He was ordained in 1962, at the Dieu De temple in Hue. In 1963 he was commissioned to study at the Buddhist Institute of Hai Duc Nha Trang.

From 1964 to 1967 he moved to the temples in Phu Yen Province. He stayed at Long Quang Song Cau Pagoda, and taught Buddhism and English (he was apparently self-taught in English) at Song Cau Secondary School. Then he served as professor of English at Tuy Hoa School, in 1968 returning to Hue to teach at Bo De Long Quang, Phu Oc, Hue.

In the summer of 1970 he was promoted by the general education department to teach at Bo De Van Ninh Khanh Hoa School. He also taught English at Van Ninh Secondary School and trained at Van Ninh Buddhist Temple.

He was ordained a second time in 1984 and officially named abbot of Nhan Pagoda, Ghenh Rang, Qui Nhon, where he guided Buddhist practitioners.

3
SHARES
Share
Posted Under: 2018, Compassionate Action, Fall
About the Author: Bill Hirsch
Bill Hirsch is a long-time Buddhist practitioner, and an ordained priest in the White Cloud Buddhist Society. He formerly served on the board of Northwest Dharma Association.