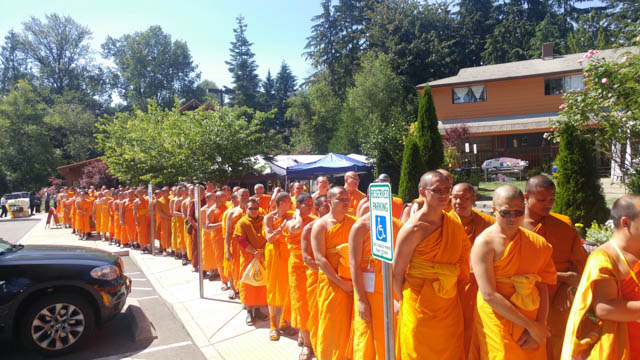 All 350 monks walked in a procession around Wat Atammayataram, along the monastery’s “Path to the End of Suffering.”
Photos by: Joe Romero, Yai Temple, Steve Wilhelm.

The day finally arrived after months of planning and preparation: 350 Thai monks were scheduled to arrive for the June 21-24 Council of Thai Bhikkhus in the U.S.A. annual meeting. This was to be the first time the meeting was held in Washington state. 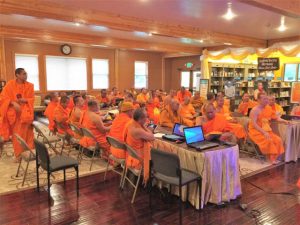 Monks concentrating at a workshop about managing temple finances and computer tools.

Thai monastics from 120 temples around the United States were converging on Wat Atammayataram, a Buddhist monastery in Woodinville, a small city north of Seattle. The monastery is often called Wat Atam.

The meeting had been sought by Wat Atam Abbot Ajahn Ritthi to commemorate the 20th anniversary of the monastery. It was made possible because the monastery’s expanded meditation hall offered ample room for the monks to meet.

Setup for the council gathering started June 18, with volunteers erecting 16 tents, while installing the tables, chairs, kitchen equipment, and other equipment needed. 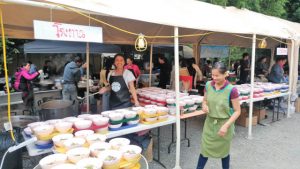 Volunteer cooks, drivers and pot washers kept the council fed and housed, and brought in guests from outlying parking areas.

On June 20 volunteer drivers drove to Seattle Tacoma International Airport to pick up monks and drop them off at the temple, or at hotels reserved for them.

Volunteers continued to provide driving as required. “I made 30 trips driving back and forth,” one said.

The temple could not have managed the council meeting without the many volunteers.

Most of the work was in the kitchen area, where volunteers were always busy preparing for breakfast at 6:30 am, and lunch from 10:30 until noon.

Food was donated by Thai restaurants and individuals, with at least 11 meals scheduled for each day.  You can imagine the amount of work that went on in the kitchen area: preparing, serving and cleaning up. It seemed the kitchen work never ended.

Lunches were served from six buffet lines.   Most monks took their food from the buffet lines and went to several “meal tents,” while senior monks were served their meals.  Even after-lunch drinks were available for the monks.  Volunteers did get to eat, but after all the monks had finished. 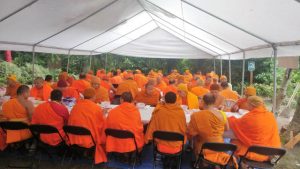 The monks ate together in a large tent, always before noon.

On Thursday June 21 the chairman gave opening remarks, and then workshops continued for the rest of the day. The monks among other things studied finance and accounting for temples, and how to use multimedia tools.

On Friday Ajahn Ritthi offered welcoming remarks, followed by a welcome from Major Robin Fenton from the City of Carnation Police Department.

Then the chairman of the Thai Bhikkhus council gave a speech, officially opening the meeting.  A photographer took group shots of all 350 monks in their bright orange robes, a very impressive sight.   An evening chant closed the day’s events at 9 p.m. 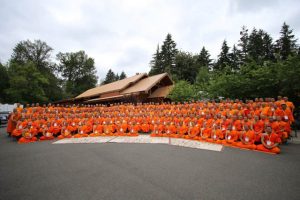 The radiant saffron robes of 350 Thai monks from around the United States.

Sunday started with the monastery’s 20th anniversary celebration, with the chairman lighting ceremony candles  followed by a memorial chanting ceremony by 350 monks.

In what was said to be a chance of a lifetime, the laypeople gave alms to 109 monks. This was an amazing event to watch as the Thai laity walked along the line of monks offering them dana.  Lunch was then served.

To end the event attending monks were invited to walk the monastery’s trail through the woods called “The Path to the End of Suffering.” The monks walked this trail in quiet contemplation, after which they were given a gift from the temple.

With the meetings and ceremonies ended volunteer drivers were called upon again, to drive monks to the airport to catch their flights.

0
SHARES
Share
Posted Under: 2018, Compassionate Action, Fall
About the Author: Joseph Romero
Joseph Romero has been practicing Buddhism for 15 years.  He initially trained in Mahayana and Zen traditions, and has practiced in Theravada tradition for the last 12 years at Wat Atammayataram in Woodinville, Washington. Romero was recently elected vice-president of the monastery board of directors, and he is also responsible for maintaining the monastery website and organizing retreats there.