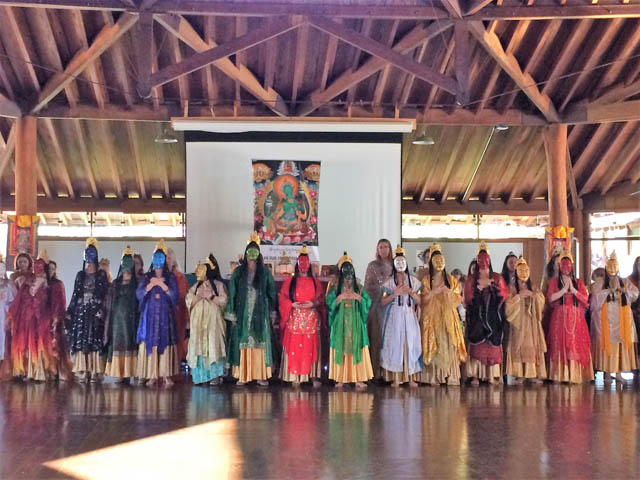 Six Northwest dancers traveled to Brazil May 19 to 27, joining 108 people from around the world to perform the Mandala Dance of the 21 Praises of Tara. 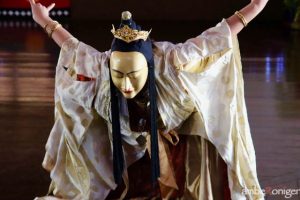 A dancer who choreographs her own moves based on four lines of one of the 21 qualities of Tara.

The dance series, inspired by the ancient prayer festivals of Tibet, was created by Prema Dasara,  spiritual and creative director of Tara Dhatu. The series fulfilled a vision of one of her primary teachers, H.E. Tai Situ Rinpoche.

Tara is an important female meditation deity in Tibetan Buddhism, representing active compassion. Tara demonstrates 21 different qualities, and is often turned to by Tibetans during times of difficulty.

Rinpoche said a festival like the ones in Tibet, centered around the dance of the 21 praises of Tara, would become world renowned. I have no doubt that word will get out far and wide that this event in Brazil was a deeply gratifying experience. 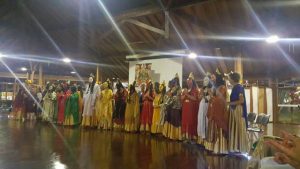 All the masked dancers, at the hall in Brasilia on day three. The way the light shines reminded me of “Indra’s Net,” how we are all connected!

Together with Myri Dakini, director of Tara Dhatu South America, and an international team of Tara Dhatu members, Prema Dasara brought together 108 participants from around the world to dance their prayers.

For nine days we danced, sang, prayed, ate, hiked and swam together. We started out at the Paraiso na Terra  (Paradise on Earth) retreat center, which is near the Brazilian capital of Brasilia. The first three days were preparation for the actual Monlam.

We began each day by singing and dancing our chants in English and Portuguese. The Prayer of  Motivation,  Refuge and Bodhicitta, and Shantideva’s Prayer set the foundation. Following this we opened the ritual of Chokjur Lingpa’s mind treasure,  invoking Tara, offering her the seven purifications and accumulations. We then engaged in a ritual of dispelling negative forces, dancing Dukkar with Her White Umbrella of Protection. We declared all phenomena arising out of emptiness by dancing the profound practice, Calling Tara from the Heart. 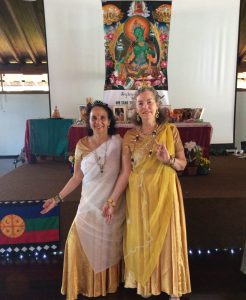 Phyllis Moses, left, and Kim Abbey, right, in front of the altar on the  last day of the Monlam in Brasilia.

The second part of the morning we followed the sadhana (practice), invoking an elaborate field of refuge and presenting elaborate offerings. We offered the traditional mandala plate and then danced  the glorious  8 Precious Offerings.  Myri and four of her senior students offered a five dakini dance that was very powerful, very beautiful.

In the afternoon we formed mandalas to dance the 21 Praises of Tara, and began preparation work to dance with the masks.  We split up into groups to work with the gorgeous and elaborate silk costumes.

We began the first night in one huge circle, each person sharing their personal prayer.  During the pre-monlam days I taught a 7 a.m. yoga class. When Prajwal Vajracharya came he taught exercises from the Charya tradition of Nepal. Prema Dasara had studied with Vajracharya’s father almost 40 years prior!

Vajracharya has started a center in the United States, and we are so fortunate in the Northwest that he chose Portland. The Dance Mandal is an exact replica of a Nepalese temple.  Classes and performances of Charya are offered there. 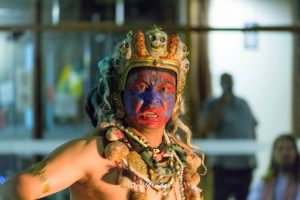 The Monlam opened with Lama Sonam, head of the Brasilia Kagyu center, offering a prayer of auspicious accomplishment. Those who had experience in traditional Tibetan practice joined him in offering Riwo Sangchod (a ritual smoke offering) to help remove all obstacles. And then we danced….all day and into the night, every day!

On last three days of the Monlam we were to return to Brasilia to offer our dance prayers to the wider community. But then we discovered there was a major truck strike, and we weren’t sure we could leave our country paradise to travel back to the city!

Fortunately our busses had fuel and the hotel was staffed, so we set out on the next leg of our elaborate adventure. But because of the truck strike we had a smaller audience than we expected, because Brazilians could not get gas for their cars. 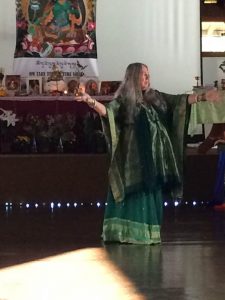 Prema Dasara, who created the Mandala Dance of the 21 Praises of Tara, leading us on day three.

During the entire visit we were aware of the power of loving kindness.  Imagine the feelings of insecurity that arose in more than 100 people, in the midst of a major Brazilian gas strike. But we recognized this is what the practices are for, to help us embody the wisdom and compassion our hearts despite outer conditions. We all were able to work together in harmony.

I can speak for all by saying that the experience was so enriching. I often thought of Tibetan teacher Anam Thubten’s words after witnessing the 21 Praises Dance, “This is an embodied dance. It’s not about ego. I felt as if we were doing the practice together with the dancers, just by witnessing it.”

We each have a longing to dwell in spacious luminosity.  Being at the monlam felt like being submerged in an oasis of the sacred. This oasis is always within us, and the Vajrayana practices are one way to help access it.

We cultivate sacred view by visualizing ourselves as the deity Tara. Within the  container of the mandala dance, our innate wisdom and compassion naturally arise. We made the visualization three-dimensional, through movement, sound, and costumes.

“It was amazing, auspicious, fulfilling, dynamic, challenging, beautiful, elegant and more,” said Eana Rose Graves. “The love and bonding among 100-plus women and the few fortunate men was profound. Each one of us was transformed and  blessed, cleansed, and polished through the practices and the daily rhythm that unfolded through the Sadhana Prema, so skillfully choreographed.”

One of the profound new experiences was to dance in Tara masks. This was a first, because masks generally are not used for Tara dances. The masks were made in Bali. 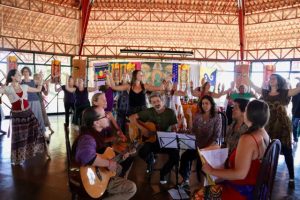 At Paraiso na Terra, all the musicians play in the center of our dancing circle.

We were given in-depth instruction by Mekare, a mask dancer who helped guide the Balinese craftsman, about how to relate with the qualities of the mask. Those of us who chose to engage with the masks felt an amazing transformation, as if another energy came in to guide us, offering another way of effacing the ego and opening to transcendent wisdom.

One of our honored guests was Ven. Karma Lekshe Tsomo , a Tibetan nun who is an old friend of Prema Dasara’s and founder of Sakyadhita, an international association of Buddhist women. Ven. Tsomo shared her charming company, and gave some excellent traditional dharma teachings.

The musicians and singers were amazing.  It was the first time they met, coming from Brazil, United States, Argentina and New Zealand . The drum beat was like our own hearts, beating together. The singers sang in English and Portuguese. They had a great deal of new material to master and they did it all with grace and beauty.

Every year, at the request of Dagmola Sakya, the Mandala Dance of the 21 Praises of Tara is offered at the Sakya Monastery in Seattle. New dancers are welcome to attend the workshop Oct. 5- 7. The offering performance on Oct.  7  is open to all.

Tara Dhatu is an organization whose mission is: “Inspiring And Uplifting Humanity Through The Sacred Arts.” There are over 90 circles turning around the world.

May the Sacred Dance of Tara continue to turn and provide blessings and inspiration throughout the world.

104
SHARES
Share
Posted Under: 2018, Dharma Healing, Arts, Fall
About the Author: Phyllis Moses
Phyllis Moses first took refuge in the vajrayana tradition in 1985.  While participating in an offering goddess dance led by Prema Dasara, she met her heart teacher Lama Tharchin Rinpoche in 1993. She then became the Vajrayana Foundation coordinator until 1999. Moses’ love of the mandala dance led her to hold a monthly circle (now in Portland area) since 2009, and participate in the Tara Dhatu council. Interested in healing and teaching for the past 25 years, she found that sacred dance is another important aspect of embodied healing. She is a level-three mandala dance teacher, and has led the weekend workshop and offering throughout the Northwest.