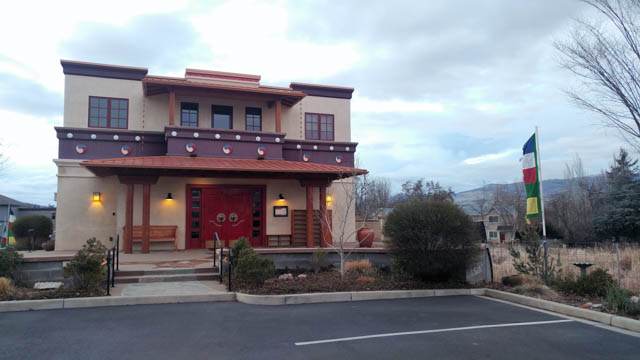 As Kagyu Sukha Choling’s two lamas move toward semi-retirement, leaders of the Ashland, Oregon, sangha are developing a multi-layered plan to keep the center alive and thriving.

Developing the plan is stretching and deepening the 150-member Kagyu Sukha Choling sangha. The challenges they face are paralleled by many dharma groups across the United States, as their founding lamas and sanghas begin to age. 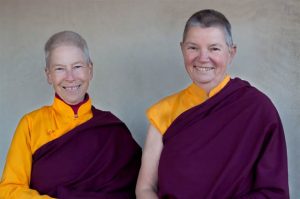 Resident lamas Yeshe Parke and Pema Clark are adjusting their roles as they age, and as the sangha steps forward.

While Kagyu Sukha Choling leaders had already been thinking about the future, the task was accelerated in 2016 after Lama Yeshe Parke started experiencing health challenges. For many years she had served with full-time teaching and heavy administrative responsibilities.

This marked the beginning of KSC’s Lama Sustainability Program.  The board and lamas realized that decreasing the lamas’ responsibilities in this way would extend their vitality and thus their availability to the sangha.

In addition the lamas were offered an opportunity to move to a nearby private residence owned and maintained by KSC, a big change after 18 years of living at the original center and then at the temple.  The board encouraged this decision wholeheartedly, as it reduced the demands of living on-site and provided a private space for well-deserved downtime.

Bringing the sangha into the process

The sangha had a dramatic reaction to the changes.  Anxiety arose in the form of many questions, along with outright fear that the lamas were leaving. The board and lamas realized that transparency and communication were critical to the sangha’s understanding and acceptance.

In 2016 the group held a visioning circle, to bring the sangha into preparing for the future. Participants were asked to respond to three questions: 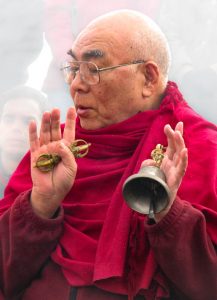 Venerable Lama Lodru Rinpoche blesses the new site at the Lord of the Land ceremony in 2007.

Sangha members met in circle again in 2017.  The goal of this circle was to plant the seed that the sangha’s commitment to each other and to their practice, are the basis of walking into the future without fear.  The three questions put before the sangha were:

More than 60 people attended each circle, including out-of-state members who continue to feel strong connections to the lamas and to KSC.  A clear message emerged that the sangha wanted a teacher-in-residence, and that they valued continuation of the teachings and practices already in place.

The board and lamas found they needed to repeatedly communicate the changes taking place via announcements in practice groups, classes, sits and e-mails.

The lamas wrote a detailed letter to the sangha about the transitions, and as the sangha became more informed, the sense of relaxation was palpable. The sangha was now being called to live their dharma teachings by practicing acceptance of impermanence, non-attachment, and patience, amid the uncertainties of finding a new resident teacher. 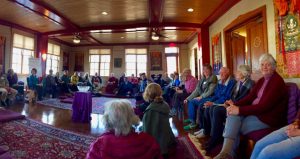 Sangha members creating their future in the 2017 visioning circle.

Now a new phase of the mentorship program is being developed, training senior practitioners to lead introductory classes by utilizing recorded lama teachings.  This will allow Lama Pema to step back from teaching every quarter.

This increased reliance on trained students has shifted the lama-centric focus of the sangha toward a sangha whose members are more connected to one another. This is actualizing the true meaning of sangha.

Lama Pema and Lama Yeshe have expressed a strong desire for a Western Shangpa-Kagyu teacher who can easily communicate with our sangha, to maintain the continuity of the lineage.  The Venerable Lama Lodru Rinpoche, one of the key teachers in the Shangpa Kagyu lineage, advised the lamas the next resident teacher does not have to be a lama.

“Find a teacher who teaches dharma from the heart,” he said.

And Kyabje Kalu Rinpoche, head of the Shangpa lineage, in 2011 told the KSC lamas that the task of finding successors was up to them.

“As you look toward the future, I will not be sending any lamas from India,” he said. “You must keep your lineage alive!  My lamas don’t retire, but they can rest more.”

Reflecting this information, the board and the lamas developed a clear procedure for selecting a future teacher, or teachers. This led to amending KSC’s by-laws to include this process.

Kagyu Sukha Choling was founded in 1982 by Kalu Rinpoche, a great teacher in the Kagyu school of Tibetan Buddhism.  Broad spiritual guidance is offered by Venerable Lama Lodru Rinpoche, while the center has been run since its founding by Lama Pema Clark and Lama Yeshe Parke. 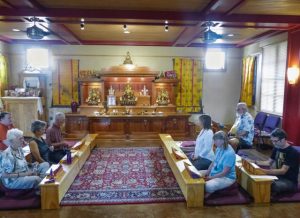 The tantric deities group prepares to practice in the shrine room.

The Ashland center became active in 2001. Rapid sangha growth led to the 2008-2010 construction of a Tibetan-styled Buddhist temple near the center of Ashland.

Lama Lodru Rinpoche guided the design of the temple and the placement of sacred elements within it, based upon Tibetan Buddhist traditions. Local architects and builders created a green and sustainable building, which was the desire of the lamas. Sangha and community members volunteered thousands of hours helping with construction, under the supervision of the builders.

The center also maintains an extensive Buddhist lending library and a small bookstore. 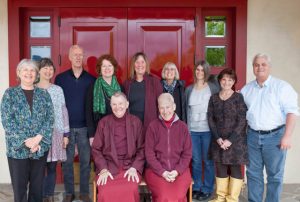 The Kagyu Sukha Choling board of directors, meeting with lamas Pema and Yeshe.

KSC is governed by an 11-person board of directors with the participation of the two lamas, who do not vote.  Each board member participates in various annual projects, and serves as a link to one of the volunteer teams that help run the center.  One salaried administrative assistant does operational and administrative functions.

Early planning for succession was at the instigation of Lama Lodru Rinpoche.

“Rely on your senior students,” he once said. “Train the strongest of them to take over for you as you need to step back.”

In 2011 the lamas acted on Lama Lodru’s advice and began to train and empower sangha members in various forms of leadership, so the center and its teachings could remain consistent over time.

In these early days of training the lamas were very specific regarding practices, ceremonial arts and leadership duties. This strong feminine guidance set an example of care, precision and respect for tradition.

The lamas’ love of the dharma and commitment to the sangha allowed the students to develop understanding and confidence.  Senior students started leading meditation practice groups and giving brief dharma talks.  The lamas had taught with respect and equanimity, and this was reflected in the teaching style of the senior students.

As we move into this new decentralized model, we are searching for new ways to meet KSC’s financial needs. 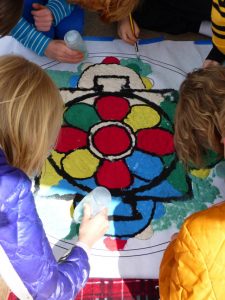 DharmaKids creating a sand mandala in 2017.

For years classes and events taught by Lama Pema and Lama Yeshe provided KSC’s most significant income.  As the lamas reconfigure and reduce their teaching calendar, the board has been thinking of creative ways to replace the revenue decrease.

Recent strategies include an increased focus on dues-paying membership.  Our “Support Your Dharma Home” campaign asks practitioners to consider the benefits they receive from KSC, and to donate accordingly.  At the sangha’s suggestion we have made this easier, by adding the ability to donate electronically on our website.  We now request fees for audio files and CDs of the lama teachings.

The board also is developing an endowment program to support the lamas in their semi-retirement.  As the board analyzes future budget projections, it considers how to financially provide for our lamas while supporting a new resident teacher.

It is our experience that the journey of finding a successor teacher for KSC has a life and momentum of its own.  Our aspirations are to secure the authentic teachings of the dharma, to preserve our lineage, and to guarantee the solvency of our center.

Lama Pema, Lama Yeshe and the sangha continue with their teachings and practices.  We call upon the support of our lineage masters and the dharma for a positive outcome, and we hope that sharing our experience may benefit other centers.

1
SHARES
Share
Posted Under: 2018, Fall, Sangha News
About the Author: Nell LeFebvre and Martha Wilhelm
Nell LeFebvre and Martha Wilhelm, the co-authors, are board members of Kagyu Sukha Choling. LeFebvre has been a board member for six years, leads the Ceremonial Arts Team, and is the liaison for visiting teachers. She lives in Portland. Wilhelm has been a board member for five years, leads the DharmaKids program, and is KSC’s event manager. She resides in Talent, Oregon. Both women are vajrayana practitioners in the Shangpa Kagyu tradition.