One of the primary ways that we fulfill our mission of supporting Buddhist teachings, practice, and community in the Pacific Northwest is through sponsoring and co-sponsoring events. The events we sponsor are not limited to one tradition or group, but invite the participation of the whole of the Buddhist community.

This fall we are sponsoring two events on the same day: one in Portland and the other in Seattle.

The Teachers Meeting Every year, on the first Saturday in October, Northwest Dharma Association sponsors a gathering of all the Buddhist teachers in the region. This year, the meeting will be held on Saturday, Oct. 6 at Dharma Rain Zen Center in Portland. You can register here or write us at… 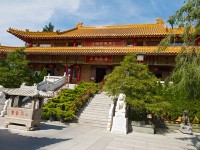 The International Buddhist Temple in Richmond, B.C., one of largest Buddhist temples in the Northwest, is expanding to meet the needs of practitioners.

Leaders of the Chinese temple have expanded the temple’s Thousand Buddha Hall and its Ancestral Hall, and are still seeking donations for these projects.

The temple, built on 3.5 acres, is modeled after the Forbidden City in Beijing, China.

This large, classical Chinese temple was founded in 1979, after two devout Buddhists, who had emigrated from Hong Kong to Canada, donated $300,000 (Canadian) and one acre of land to establish a genuine Chinese temple in Richmond.

The temple is supported by the International Buddhist Society, which according to the temple website is seeking to fulfill the following…

“How many of you think teenagers can meditate?” asks Joe Klein, director of Inward Bound Mindfulness Education (iBme), on the first evening of the Pacific Northwest Teen Meditation Retreat this August.

All hands in the room go up.

“How many of you are ready to be challenged?”

Nearly all hands go up again. Although many of the teens have some doubt about their capacity to meditate, Klein is confident and reassuring. He tells them about the many retreats he’s led across the country, in which teens have committed themselves to this retreat format and found it to be a very positive experience, even if difficult at times.

Earlier in the day the 16 teenagers surrendered their phones, said goodbye to…

One might wonder, how a garden filled with 1,000 Montana-made…