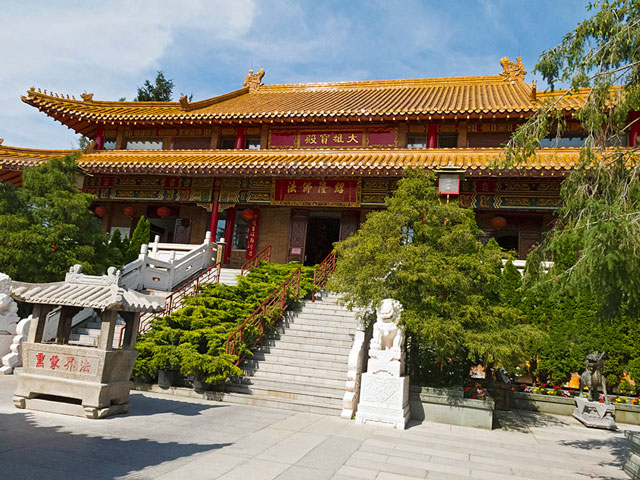 The Main Gracious Hall, at the International Buddhist Temple in Richmond, B.C.
Photos by Yvette Cardozo

The International Buddhist Temple in Richmond, B.C., one of largest Buddhist temples in the Northwest, is expanding to meet the needs of practitioners.

Leaders of the Chinese temple have expanded the temple’s Thousand Buddha Hall and its Ancestral Hall, and are still seeking donations for these projects.

The temple, built on 3.5 acres, is modeled after the Forbidden City in Beijing, China.

This large, classical Chinese temple was founded in 1979, after two devout Buddhists, who had emigrated from Hong Kong to Canada, donated $300,000 (Canadian) and one acre of land to establish a genuine Chinese temple in Richmond.

The temple is supported by the International Buddhist Society, which according to the temple website is seeking to fulfill the following mission: “To propagate Buddhism through its practice, and to educate all sentient beings on how to attain enlightenment and purification of the mind.”

The temple is under the spiritual direction of the abbot, Ven. Guan Cheng. 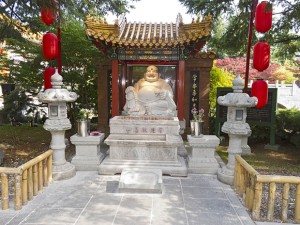 The Maitreya Shrine at the International Buddhist Temple.

A suburb of Vancouver, B.C., Richmond is a highly international city, with 65 percent of the people of Asian descent.

The temple includes the Thousand Buddha Hall, a classical Chinese garden, and a vegetarian restaurant supplied by the temple’s own 8-acre farm.

At the rear of the large walled compound is the Meditation Hall, also built in classic Chinese style, which is large enough to accommodate 300 meditators on the first floor, and 150 on the top floor.

The “Main Gracious Hall,” the first large temple in the complex, contains five large Buddhist statues, including a 35-foot statue of Shakyamuni Buddha that is among the largest in the region.

Expect to take at least an hour to tour the complex.  Guided tours for groups of 15 or more can be arranged (see the “guided tours” page on the web site).  Dharma talks in English are given by the abbot every Saturday from 9 to 11 a.m.

0
SHARES
Share
Posted Under: 2012, Dharma In Canada, Fall
About the Author: Bill Hirsch
Bill Hirsch (Xiaobaiyun) has been a practicing Buddhist for 48 years. In 1964 he took the vows of a Theravada monk in Thailand, and in 1990 he was ordained as a priest in the White Cloud Buddhist Society, a Chinese Hua Yen/Pure Land tradition. Most recently, he received initiation in the Mặt Giáo Vietnamese Buddhist school. He works primarily with the Ecosangha program at Seattle University, and with the Asian Buddhist community in Seattle.