His Eminence Lingtrul Rinpoche, holding onto a huge sculpted metal finger on the right hand of the giant statue, watches as a sangha member tightens the bolts that hold the left hand in place.  Rinpoche speaks a short sentence in Tibetan and is answered by a muffled voice from inside the statue. Inside the statue?

I peek inside through an opening in the bronze back: There is Tenzin Tsundu, resident ex-lama and sacred arts practitioner, fastening bolts from the interior cavern of the statue, a cavern now painted dark red.

“Where’s the washer for the bolt that fastens the foot?” someone asks.

Bending down to see if this tiny metal piece might have rolled under the statue, which is resting on two-by-fours, the fragrance of camphor and sandalwood hits me. A visitor unfamiliar with this process unfolding at Kathok Gonpa, I inhale deeply, adding another mystery to my growing list. 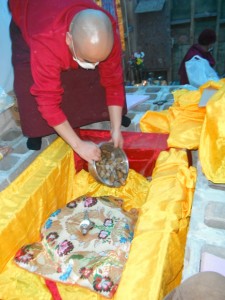 Something remarkable has been unfolding over the last year in the tiny village of Coombs, on Vancouver Island, off the coast from Vancouver, British Columbia. At the Tibetan Buddhist dharma center Kathok Gonpa, within a Japanese-style pagoda being built of cedar, a 15-foot bronze statue of Padmasambhava, founder of Tibetan Buddhism, is nearing completion. This is the first time ritual Buddhist art on this scale has been undertaken on Vancouver Island.

The statue is here because of the vision, commitment and leadership of Lingtrul Rinpoche, the eighth head of Tra Ling Monastery in Golok, Tibet. The statue’s parts, cast in India, arrived late last year and were guarded in a local family’s metal foundry, awaiting completion of the Golden Shrine’s roof.

During the last months of 2011 and the first months of 2012, sangha members, supporters and friends brought offerings to fill the concrete pedestal upon which the statue would be lifted. In February the base was filled, blessed, and sealed. In the beginning of July the bronze lotus seat of the figure was filled with blessed substances.

Until the statue was fully assembled and finished its surfaces showed the marks of bronze castings, not the precious gold finish to come. The assembly was guided by detailed instructions in a 400-year-old Tibetan text, relayed by daily phone calls between Coombs and Tibet.

A small and dedicated group of Canadians of European descent, gathered here over the last few years, are now assembling, awakening and consecrating the huge bronze statue of Guru Rinpoche.

Who is Guru Rinpoche? 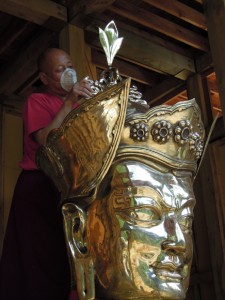 As Shakyamuni Buddha is the original teacher of historical Buddhism, Padmasambhava is celebrated, in countless manuscripts, thangka paintings and sculptures, as the first Buddhist teacher of the Tibetans. Also called Guru Rinpoche, he lived in the 8th Century and brought Buddhism to Tibet from Northern India.

Padmasambhava was a colourful, charismatic figure. In a tradition that cherishes and nurtures the relationship between teacher and student, and which is full of vivid stories that bring these important teachers to life as both human and enlightened beings, Padmasambhava is a powerful focal point for meditation.

But this sculpture is more than a meditation support. One clue lies in how ancient beliefs in India and beyond view the statue’s eyes, and another in what is placed inside the statue.

It is July 7, the Dalai Lama’s birthday. Leaves rustle in the trees above the winding gravel drive, the sound of chanting draws nearer, and Lingtrul Rinpoche appears at the head of a procession of sangha members. Each of us wears a face mask to not contaminate what we carefully carry in our arms: hundreds of precious rolls of cloth-wrapped mantras brought by Rinpoche from Nepal, carried step by step to the statue.

These mantra-scrolls, along with a range of other things, are to fill the body cavity of the statue of Guru Rinpoche, the second Buddha of Tibet. The practitioners are chanting the Orgyan Prayer, the Guru Rinpoche prayer that precedes all practices in our tradition by invoking Padmasambhava’s presence.

It seems a karmic miracle, that through the compassion of Lingtrul Rinpoche and the hard work of dedicated volunteers, this statue and its Golden Shrine have manifested here in the sleepy community of Coombs.

“It is very important that it is done right,” he said. “Every day Rinpoche called Tibet, asking his teacher for instructions.”

When asked about what kinds of items go into the lotus throne and the body of the statue, Tsundu enumerates some of them: semi-precious stones, precious metals, jewelry, huge crystals, conch shells, porcelain vases filled with precious medicines, mantras, and red and yellow silk bags filled with a powerfully fragrant mixture. 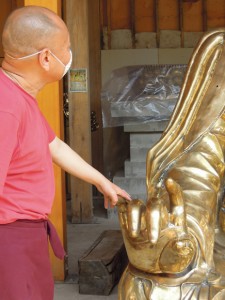 I had marvelled at the tarp on the temple floor, covered with a small mountain of variegated, textured, off-white substances. The wheelbarrow and shovels looked out of place in the sacred interior.  Mary Pat Thompson recalled with awe the making of the mixture with which the bags were filled.

“The mixing was amazing when it began,” she said. “Rinpoche had the big tarp out on the lawn, and we were standing around mixing it with our hands and shovels, as he was pouring it in.  They had poured in big huge bags of saffron, sandalwood, lavender donated by someone down here, dried and ground-up cedar, and white granular bits of camphor.”

The rolls of mantras, the sacred-syllable prayers and chants, were placed with particular care. “There are so many mantras,” Tsundu said. “There is one for each part of the body – the eyes, the nose, the ear, the organs. Everything has to be placed inside the statue just right, in the exact place stipulated, otherwise the auspicious blessings could turn into the opposite.”

Tsundu leans back and concludes: “Once this is done properly, and the whole process is finished, it is no longer just a statue – it is a living Buddha. When you come before it, you will be able to feel the presence. Your prayers will be heard better. At the same time, the focus will not just be on the individual who comes to meditate or pray – the blessings from this powerful presence will be for everyone, in the whole world.”

Longtime practitioner David Ayers, who with his wife Jane originally purchased the 20 acres that now house the Kathok Gonpa centre, said the empowerment of these statues can be tangible. 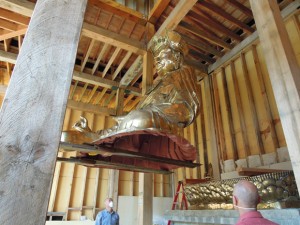 Lifting the statue onto the lotus pedestal.

“I realize that a large statue (or any statue, for that matter), is more of a Tibetan expression than a North American one. Still, when Lingtrul Rinpoche chose to donate his personal savings to purchase the statue, I started to pay attention,” Ayers said. “I have been in the presence of the large Tara statue at Chagdud Gonpa in Cottage Grove, Oregon, and can definitely relate that the compassionate and peaceful meditative energy from this statue is transformative for any who are open to it.

“There are also stories of the main Buddha statue in the Jokhang Temple in Lhasa speaking from time to time,” he said. “When the construction is completed in the very traditional manner that Rinpoche is following, and the consecration is done, who knows?”

The consecration and awakening of the statue will continue through August and September, when a well-known Tibetan artist will cover it with gold, and finish painting in the eyes.  Only then will it be fully empowered to do its work in the world.

2
SHARES
Share
Posted Under: 2012, Dharma In Canada, Fall
About the Author: Mary Pat Thompson & Astri Wright
Mary Pat Thompson teaches and practices social work in the area of family services on Vancouver Island, and is a sangha member and student of Tulku Karzang at Kathok Gonpa.

Astri Wright teaches South and Southeast Asian art at the University of Victoria, and has been a pilgrim-visitor to Tibetan Buddhism for decades and in recent years to Kathok Gonpa.