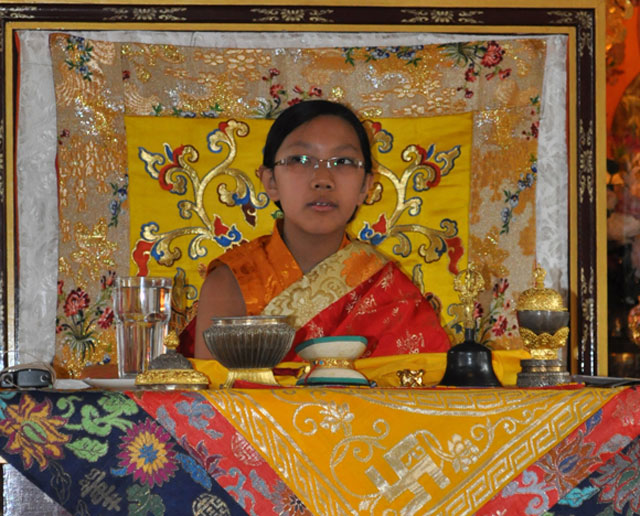 His Eminence Asanga Rinpoche seated on the throne before offering teachings at Sakya Monastery in Seattle, this July.
Photos by: Tashi Paljor

His Eminence Asanga Rinpoche was welcomed back to the Sakya Monastery of Tibetan Buddhism in Seattle this summer, after seven years studying in Nepal and receiving important Sakya teachings in India.

Asanga Rinpoche, 13, is one of four grandsons of His Holiness Jigdal Dagchen Sakya Rinpoche, three of whom have been studying the Buddhadharma intensively in the Sakya tradition, preparing to carry the tradition’s teachings and transmissions into the future. 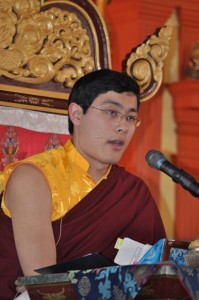 His Eminence Avikrita Rinpoche offering a dharma teaching at Sakya Monastery in February.

The Sakya tradition has been passed down as a hereditary lineage through the Khon family, which in 1073 founded the first Sakya Monastery, in Tibet.

Sakya Monastery in Seattle is blessed that the three grandsons were able to visit this year.   In addition to Asanga Rinpoche’s recent visit, His Eminence Avikrita Rinpoche, 18, and His Eminence Abhaya Rinpoche, 15, visited in early 2012.  During their time here they received teachings from their grandfather Dagchen Rinpoche, and participated in dharma activities.

We were very fortunate to be a part of history, when Avikrita Rinpoche and Asanga Rinpoche gave empowerments and teachings for the first time in the West.

For instance, on July 29th Asanga Rinpoche bestowed the Amitayus-Hayagriva initiation at Sakya Monastery, the first initiation he has given in the West.

Amitayus represents long life and Hayagriva represents protection.  This initiation not only benefits the long life of those receiving it, but also establishes a dharma connection between the students and teacher. 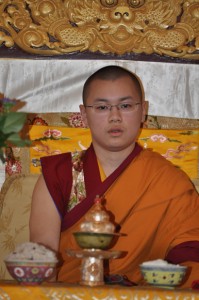 His Eminence Abhaya Rinpoche seated on the throne at Sakya Monastery in January.

His Holiness Dagchen Rinpoche and his family escaped from the Chinese occupation of Tibet in 1959, and came to Seattle in 1960 under a Rockefeller Foundation grant.

His Holiness Dagchen Rinpoche helped to establish a department of Tibetan language and literature at the University of Washington, and since 1974 has been actively teaching Buddhism in Seattle. In 1984 he founded the Sakya Monastery of Tibetan Buddhism in Greenwood, a neighborhood in the north end of Seattle.

Lineage in Buddhism, and especially in the Tibetan Buddhist tradition, is extremely important.  It not only represents an unbroken connection back to the historical Buddha, but also ensures that the knowledge and wisdom of past masters of the tradition will be carried forward to new generations of students and teachers. 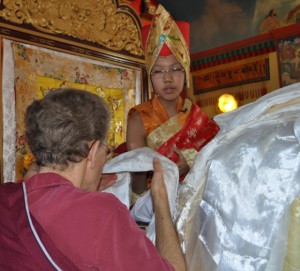 His Holiness Dagchen Sakya Rinpoche is a lineage and knowledge holder of the transmissions of three of the greatest lamas of the 20th century:  his father Ngawang Thutop Wangchuk Rinpoche (the last Sakya throne holder in Tibet before the Chinese invasion),  Dzongsar Jamyang Khyentse Chokyi Lodro Rinpoche, and Dilgo Khyentse Rinpoche.

Avikrita Rinpoche and Asanga Rinpoche both began their studies at the age of five.

Avikrita Rinpoche studied Tibetan language and did college preparation work in Buddhism in India. He is currently attending Dzongsar College in Bir, India.

Asanga Rinpoche began his studies at Tharlam Monastery in Nepal, and will attend Sakya College in Rajpur, India, next year. 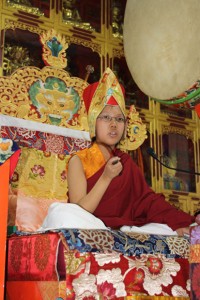 Both grandsons have passed the challenging examination for leading Vajrakilaya puja.  In 2011, Asanga Rinpoche became the youngest person ever, at the age of 12, to successfully lead this ritual.

Abhaya Rinpoche is an ordained monk and is currently in the newly opened Pema Tsal Monastery in Pokara, Nepal, leading the summer season fasting retreat (Yar-ne). Next year he will take his Vajrakilaya examination, and then go on to Sakya College.

In February 2012, Avikrita Rinpoche bestowed the uncommon initiation of Manjushri Vadisingha (the bodhisattva of wisdom).  He also gave a talk to the public on “transforming the mind,” with particular emphasis on the practice of giving and receiving (Tonglen), where the practitioner exchanges accumulated merit for the suffering of others.

The Tibetan Association of Washington requested that Avikrita Rinpoche give a talk at the Tibetan Losar celebration and it was very well received.  Also, Avikrita Rinpoche and Abhaya Rinpoche traveled to California to visit relatives and gave teachings and initiations at the Los Angeles Tara Center founded by his grandmother, Her Eminence Dagmo Kusho. 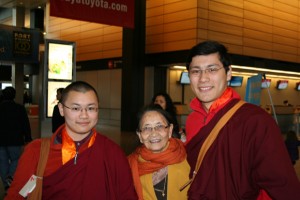 In August, Asanga Rinpoche traveled to California to visit his uncle and aunt, and gave teachings at the Tara Center in San Gabriel, and its branch in Santa Barbara.

After his return to Seattle, on Aug. 19 Asanga Rinpoche gave a teaching on “The Significance and Meaning of Taking Refuge.”  He eloquently explained that refuge not only marks the beginning of the path, but the path itself.  All Bodhisattvas take refuge as a commitment to engage in positive actions for the benefit of sentient beings, and with a vow to achieve enlightenment for all beings.

It is so wonderful that the grandsons of His Holiness Dagchen Rinpoche are willingly and happily studying, meditating, and teaching the Buddhadharma in the 21st century, to contribute to the preservation and continuation of Tibetan culture and religion.  We are so fortunate to receive the stream of their blessings.

0
SHARES
Share
Posted Under: 2012, Fall, Sangha News
About the Author: Denis Martynowych
Denis Martynowych has had a regular meditation practice for over 12 years. He is a recent graduate of Spirit Rock’s Community Dharma Leader Program, is deeply interested in creating compassionate, sustainable, and mindful communities. He co-leads a neighborhood sitting group in West Seattle, as a member of Seattle Insight Meditation Society. Martynowych also is involved with Buddhist Peace Fellowship, reflecting his interest in engaged practice.