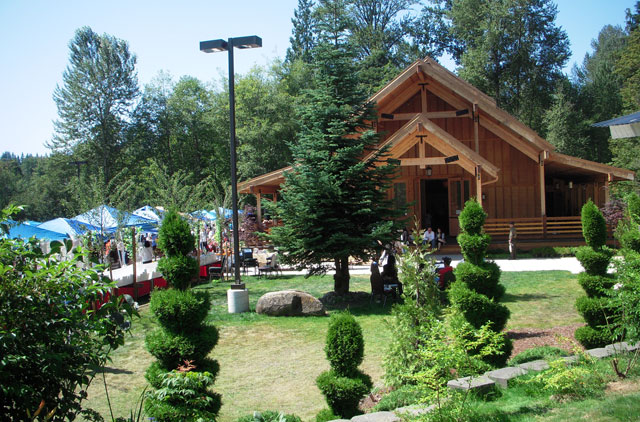 “It is a dream come true,” said Ajahn Ritthi Thirajitto, abbot of the monastery.

The monastery sits on a five-acre plot of land in rural Woodinville, in a quiet setting of horse stables and friendly neighbors. Five Thai monks and one American monk serve the monastery as teachers, for the growing lay community composed of several hundred families, mostly Thai immigrants, but also for a growing number of Western converts to Buddhism. 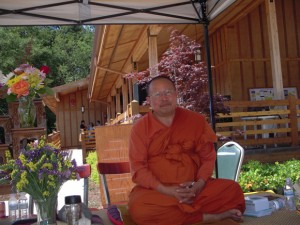 The Thai community gathered at Atammayata on Aug. 12 for the monastery’s annual picnic, and got a chance to explore the building, and eat Thai food from booths set up on the newly paved parking lot. The August picnic has become an established event attracting about 700 people, including dozens of local neighbors.

The monastery was given its certificate of occupancy just the week before this year’s picnic.

Atammayata Buddhist Monastery is the center of a vortex of activities. It serves as a residence for monks, as a community center for the immigrant Thai community, and as a teaching and practice center for the growing English-language insight meditation community. 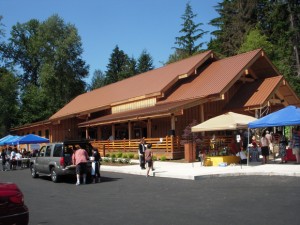 The new Atamma Meditation Hall was built using a combination of Northwest and Thai styles.

Every Wednesday evening at 7 p.m., the monastery hosts a public insight meditation class, free of charge. The Wednesday Friends class is in English, and attracts growing numbers of people from the Puget Sound region.

The monastery also serves as a Thai community center, where the local Thai community gathers for traditional observances and holidays and cultural events. 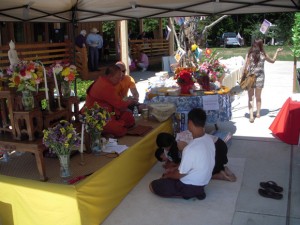 Every Saturday the monastery holds Saturday School for the Thai children, in order to teach them Thai language, culture, and customs, so the children don’t lose touch with their cultural roots as they grow up in American society.

Every Sunday morning, the Thai community gathers for a traditional chanting ceremony, dharma talks in both English and Thai, and the high point of the Sunday gathering: lunch offering for the monks, and a potluck for the congregation.  After being held in Shoreline for many years, this Sunday gathering will now be at the Woodinville monastery.

The lay community is very active in the life of the monastery. The monastery is not “owned” by the monks, but by a board of directors comprise of lay people, who are responsible for the well-being of the overall Buddhist community.

Atammayata Buddhist Monastery is a formal monks’ residence, and a forest monastery, where monks live and practice meditation and sutta study. The monastery is affiliated with the teachings of Ajahn Pannananda and Buddhadasa, two renowned forest monks of Thailand.

Ajahn Buddhadasa, and his colleague Ajahn Pannanada, are the inspiring teachers whose works are used as foundation texts for the teachings of the monastery. Ajahn Buddhadasa’s book Anapanasati Mindfulness With Breathing, (Wisdom Publications) is the meditation text for the methods of insight mediation taught at the monastery.

The monastery sponsors the Dhamma-Dana Project (Gift of Dhamma), publishing thousands of Buddhist books for free distribution, in both English and Thai. 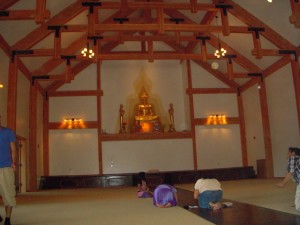 The interior of the meditation hall features a high ceiling supported by large wooden beams, and a large gold Buddha.

With the establishment of the official ordination boundary (sima) in 2006, the monastery became a fully functioning Theravada Buddhist temple, where monks can be ordained. Ajahn Ritthi is approved as one of just six Thai preceptors in the United States, which means he is qualified to ordain new monks.

The monks follow the traditional observance of the 227 monastic vows, and an ascetic way of life. Monks of Atammayata Buddhist Monastery abstain from entertainments such as watching television, shopping, or driving cars. They eat their daily meal from the alms bowl every day before noon, and depend on the generosity of supporters for their daily food. They also observe the strict three-month rains retreat every year from July until November, when monks are forbidden to travel overnight from the monastery.

Practicing with a monastic community is a new experience for many Westerners, who are more accustomed to practice with a lay teacher, a person who has not taken monastic vows. But the monastic traditions offer a strong support for lay people, as a “base community” of inspiration.

Monastic institutions are the most revolutionary and the most important institutions in Buddhism, and many believe the dharma will not be solidly established in America until a flourishing monastic tradition of monks and nuns has firmly taken root.

A monastery is a kind of “Peace Corps,” according to Robert Thurman, professor of Buddhist studies at Columbia University in New York.

Thurman has said monasticism and militarism have been in a neck-and-neck global and universal struggle for the heart and soul of the human-race for the past 3,000 years, and that Buddhism will not be firmly transmitted to the West until monasticism takes root here.

Monasteries serve as base communities, where lay people can study and practice in temporary retreat from the daily stress of the world, and then return to “engage” the world from a basis of enlightened practices.

The monastery is open to the public, and hosts a weekly insight meditation class every Wednesday at 7 p.m., and is only a 40-minute drive from downtown Seattle (in good traffic conditions).

The first major public event to be held in the new meditation hall will be the annual Kathina Festival, on Sunday, Nov. 4, at 9:30 a.m.  Kathina marks the end of the rains retreat, which means monks are free to travel away from the monastery. Lay people celebrate the festival by offering new robes to the monks.

0
SHARES
Share
Posted Under: 2012, Fall, Sangha News
About the Author: Ven. Santidhammo
Ven. Santidhammo is a Western-born Buddhist monk, practicing in the Thai forest tradition, who has lived as a monk at Atammayata Buddhist Monastery for 12 years.