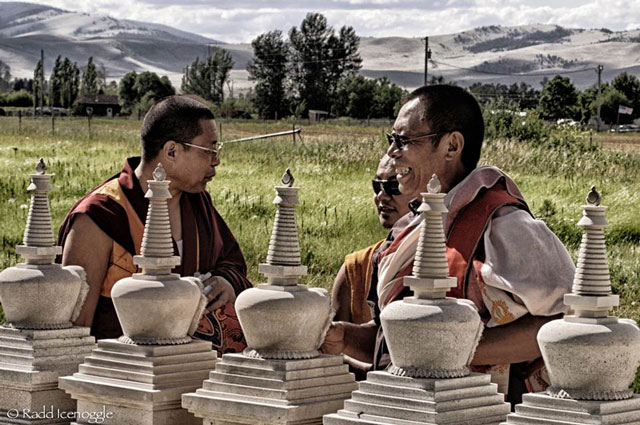 On the first day of consecration ceremonies, (from left) Khenpo Namchak, Khenpo Ugyen, and Tulku Sang-ngag discuss their plans.
Photos by: Radd Icenoggle

One might wonder, how a garden filled with 1,000 Montana-made images of the Buddha can create peace in the world. Just as a colorful Tibetan flag sends its prayers on the winds, so a garden of peace sends blessings to lands far and wide, as countless beings come into contact with its peaceful figures, native plants, and serene surroundings.

People feel deeply calm when they view sacred imagery. During a time fraught with heightened negative emotions, peaceful sanctuaries are needed more than ever. In a world with many monuments to war, a living offering for peace flourishes in Arlee.

The Garden of One Thousand Buddhas, spread over 10 acres and set on a 60-acre former sheep farm, is the fruition of a childhood vision of Tulku Sang-ngag Rinpoche. He is founder of the Ewam Nyingma School of Tibetan Buddhism and the Namchak Foundation, as well as a holder of many rare and precious lineages of Tibetan Buddhism.

As a child, Rinpoche envisioned 1,000 Buddhas and 1,000 stupas lining the walls of a dharmachakra, an eight-spoked wheel representing the noble eightfold path, one of the original teachings of the Buddha Shakyamuni. 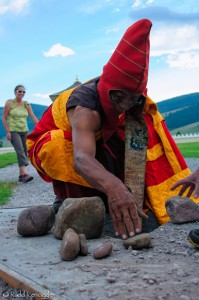 Tulku Sang-ngag places stones under the suppression stupa, to hold negativity at bay.

In the late 1990s Rinpoche was driving with a student through the Jocko Valley, and immediately was reminded of his childhood vision of a mountainous region shaped like the petals of a lotus flower, with a wheel-shaped garden growing in its center. Northwestern Montana is reminiscent of Tibet, with its snow-capped mountains and indigenous tribes.

Today, the garden is seated in the already-blessed land of the Salish-Kootenai and Pend d’Oreille American Indian tribes, where the land and its people have a history of strife and submission, yet resilience through peaceful resistance, much like the recent history of the Tibetans. Through thoughtful dialogue and shared community events including an annual Festival of Peace, Rinpoche has collaborated with the native residents to foster open relations with people of all faiths.

Over a dozen years into the garden’s creation, the stupas and Buddhas are finally in place on the throne walls. A 24-foot statue of Yum Chenmo, the mother of all Buddhas representing the union of wisdom and compassion, overlooks the 1,000 Buddhas on the eight-spoked wheel, like a mother overlooking her children.

The 1,000 Buddhas represent the coming of 1,000 Buddhas to Earth over an eon, of which the Buddha Shakyamuni was the fourth, as foretold in Buddhist scriptures. 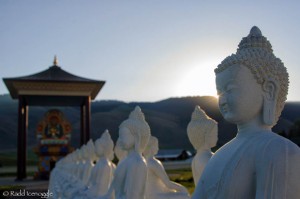 Four additional larger Buddha statues anchor the four directions around the outer ring of the garden. They symbolize the triumph of compassion over negativity, and destroyed weapons and symbols of war are buried under the statues, as if suppressed by the wisdom of the Buddhas.

All the statues and stupas are filled with symbols of harmony and offerings to the earth, such as precious stones, sand from all the continents, water from all the seas, herbs, plants, medicine, blessings and mantras.

A pond and waterfall will soon complete an area near a fragrant lavender garden, which will feature memorial statues of two of Rinpoche’s teachers: His Holiness Dilgo Khyentse Rinpoche, and Tulku Orgyen Chemchok.

A statue of Quan Yin, the Chinese female representation of Chenrezig, the Buddha of Compassion, also resides at the garden. 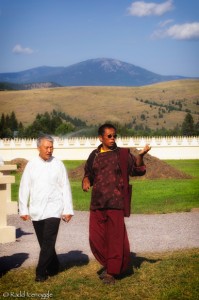 Tulku Sang-ngag shows the garden to Tashi Namgyal, a North American-based elected representative to the Tibetan Government in exile, in India.

Though many of these details evolved later in the construction of the garden, Rinpoche’s original vision has manifested as he foresaw.

Hundreds of people, from all over the world, visit the garden every week. Like the great pilgrimage destination of Bodh Gaya in India, where the Buddha achieved enlightenment, the garden inspires pilgrims of all faiths to travel to a rare sacred site located right in North America.

People visit with their families. They walk together or alone. Some whisper mantras. Others meditate on a bench.

A contemplative walkway over one mile long allows visitors to circumambulate the garden, turning a simple stroll into a way to earn merit and purify obscurations, exactly as the Buddha’s teachings instruct.

Visitors also come to make offerings or just to pick up something from the gift store. And some Buddhist students visit the garden to receive teachings from Rinpoche. 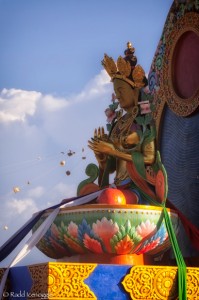 Prajnaparamita, at the center of the wheel, during the consecration of the garden.

Tulku Sang-ngag Rinpoche teaches all over the world to students eager to learn the dharma from an awakened master.

The peace festival features dialogue with the tribal community, focusing on topics of interfaith harmony and environmental ethics. The festival also encourages peaceful dialogue and shared visions of a better world, something that has become synonymous with the Tibetan Buddhist path as taught by the greatest living example of peace: His Holiness, the 14th Dalai Lama, the spiritual leader of the Tibetan people in exile.

In 2009, during a trip to Washington, DC., Rinpoche met briefly with the Dalai Lama. At that time, Rinpoche requested that the Dalai Lama visit the garden upon its completion to formally bless and consecrate it. The Dalai Lama agreed. 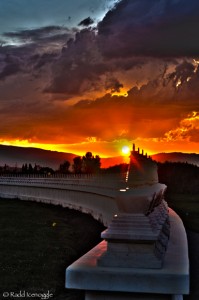 The stone stupas, carved in stone in Indonesia, at sunset.

Although no plans have yet been made for a visit, Tashi Namgyal, North America’s representative to the Tibetan government-in-exile, has told the Dalai Lama of the great accomplishments recently made toward the garden’s completion. Namgyal visited the garden during the stupa consecration ceremonies in July.

It is the aspiration of Rinpoche’s students that the Dalai Lama visit Montana in the next few years, if the timing and circumstances prove fortunate.

In the meantime, the construction season is short in Montana, and the Ewam sangha has much to accomplish before the winter snow arrives. There is still money to be raised and structures to be erected.

The path to peace is long, but at the Garden of One Thousand Buddhas, the foundation is strong.

3
SHARES
Share
Posted Under: 2012, Fall, Sangha News
About the Author: Deborah Hicks
Deborah Hicks is media and communications coordinator for the Garden of One Thousand Buddhas, created by the Ewam Nyingma School of Tibetan Buddhism. She is a student of Tulku Sang-ngag Rinpoche, and lives in Missoula, Mont., with her husband Jason Hicks and their two Lhasa Apso pups.