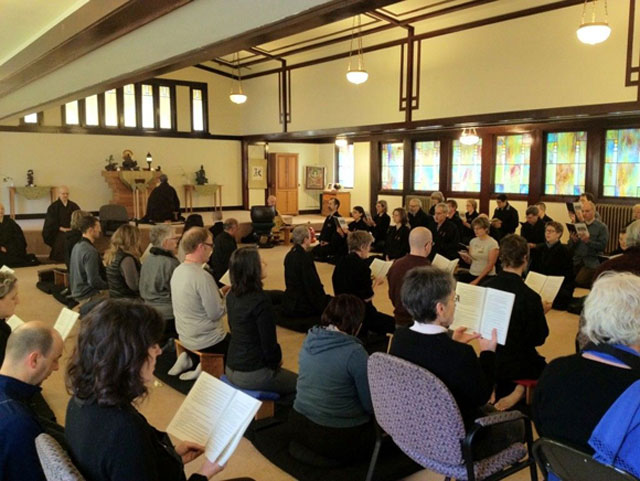 Dharma Rain Zen Center in Portland recently purchased 14 acres of land in Portland, to create an urban campus including a temple, residences for monastics, co-housing for lay people, even a playground for children.

The center members’ decision to chose this land, a former quarry, was “somewhat like a Zen koan,” according to board member Jeanna Annen Moyer:

Picture this: morning at a spacious, quiet meditation hall at the foot of a bluff, surrounded by morning mist and natural beauty. As the sky begins to lighten in the east, a bell in the hall is rung, and monks and lay people living in nearby buildings arise and make their way to the hall. As they settle into silent meditation, a sense of stillness grows, even as the birds outside awaken and call to each other, and sunlight moves across the floor of the hall.

Later, morning service is chanted, bells are rung, and merit is offered to those who are in difficulty. After service, a silent, ritual breakfast is served. As people leave the hall, they take in the natural beauty that surrounds them, and hear the exuberant sounds of the children who live on this land making their way to school.

A dream? Yes, at this point. But as the Buddha said, it is our thoughts that create this world. 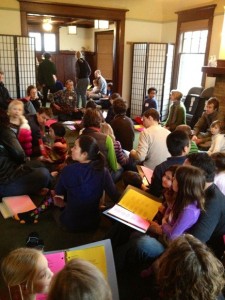 The roots of Dharma Rain Zen Center have existed in Portland since the 1970s.  What started as a sitting group associated with Shasta Abbey in a rented house, with a few people coming to sit zazen, has thrived as an urban Soto Zen temple dedicated to making Zen practice accessible to people in their everyday lives.

Dharma Rain is now an independent organization with over 220 members, three buildings, a wide array of teaching and service programs (including one of the largest Buddhist children’s programs in the country), and affiliated sitting groups that have formed in several locations around Oregon. As we have grown and changed, our dreams for the future have also changed, and right now we are dreaming big!

Two years ago Dharma Rain undertook a strategic planning process to clarify our current state, to identify our strengths and weaknesses, and to develop a vision for the next 15-20 years. The result of this was a comprehensive strategic plan, which clarified our need for facilities that better met the needs of our growing sangha. These needs included more rooms for our children’s and adult programs, handicap accessibility, more suitable space to hold extended retreats, adequate parking, and room for our residential program (often at full capacity) to grow.

The board approved the strategic plan in 2011, and tasked a property search committee with finding a facility that would meet our goals. The committee immediately ran into a conundrum: Dharma Rain is committed to making the dharma widely accessible, and so an urban location is ideal. However, urban properties that met our needs were well beyond our means. This lead to the consideration of several options, including perhaps dividing into two campuses, one urban and the other farther out of town where land was cheaper.  However, there was a great deal of interest and energy in the sangha in finding a single campus that could meet all of our needs. Solving this problem felt somewhat like a Zen koan—an apparent contradiction that could not be resolved using reason. Enter the property at Siskiyou Square. 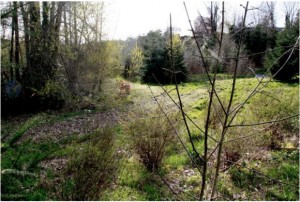 A view of a path winding through the new property. Dharma Rain’s vision for development includes building structures that align with, and enhance, the natural beauty of the surroundings. Photo credit: Karen Sokyo Swallow

This property is a seeming anomaly: an extensive parcel of undeveloped land within Portland city limits, reasonably priced. Of course, there is a reason for this. The land is a former gravel quarry and construction landfill which, 30 years ago, was capped. Since then, different developers have eyed the property, but development proposals were unable to surmount the surrounding community’s resistance to a big box store. In considering the property, Dharma Rain’s board undertook an extensive, months-long due diligence process to determine whether the property could work as our future home. The board considered a wide range of issues, including environmental, geotechnical, zoning, financial, community, and legal. After rigorous review, in June 2012 the board voted to proceed with the purchase.

Dharma Rain Co-Abbot Kyogen Carlson sees this project as an important milestone in the development of Zen in the United States:  “It’s important for Buddhism and Zen to step forward in terms of visibility and engagement with the larger community,” he said. “We plan to work with the community at the new property to create pedestrian-friendly paths and greenways, and to foster a sense of connectedness with the people and neighborhoods around us.”

Co-Abbot Gyokuko Carlson adds, “Having a single campus where we can all practice together has been a long-standing dream. Developing land that has been used as a landfill into something beautiful that serves everyone is a very practical form of Zen practice.”

A key aspect of developing the land will be establishing the Householder Refuge, a co-housing community oriented towards Buddhist practitioners, with 30 units on the grounds of Dharma Rain’s new home.  This synergistic relationship financially supports the development of the temple grounds, while giving lay practitioners an opportunity to live in community with one another as well as with the temple. 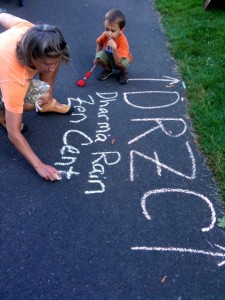 In addition to the Householder Refuge, Dharma Rain plans to build five primary buildings on its central campus, including a meditation hall, living space for residential and monastic practice, classrooms, space to hold larger events, and administrative offices. A playground is also included in the plans.

All buildings will have a relatively light footprint due to the nature of the land, and will be built using green, energy-efficient techniques. The intention is to create buildings that are ecologically responsible and also complement the natural surroundings.

Dharma Rain plans to develop the property in phases, starting in the summer of 2013 with the Householder Refuge. Additional buildings will added over the next several years, culminating in the sale of Dharma Rain’s current properties in southeast Portland and moving into the new facilities.

“This is a very exciting time for our sangha, and for Zen in the West,” said Kyogen. “We’re looking forward to partnering with the community to bring our vision to life on this new land.”

0
SHARES
Share
Posted Under: 2012, Fall, Sangha News
About the Author: Jeanna Annen Moyer
Jeanna Annen Moyer is a lay disciple of Sallie Jiko Tisdale in the Soto Zen lineage at Dharma Rain Zen Center. She is currently a member of the board of directors, and recently assumed the role of development director to support the purchase and development of Dharma Rain’s new campus.