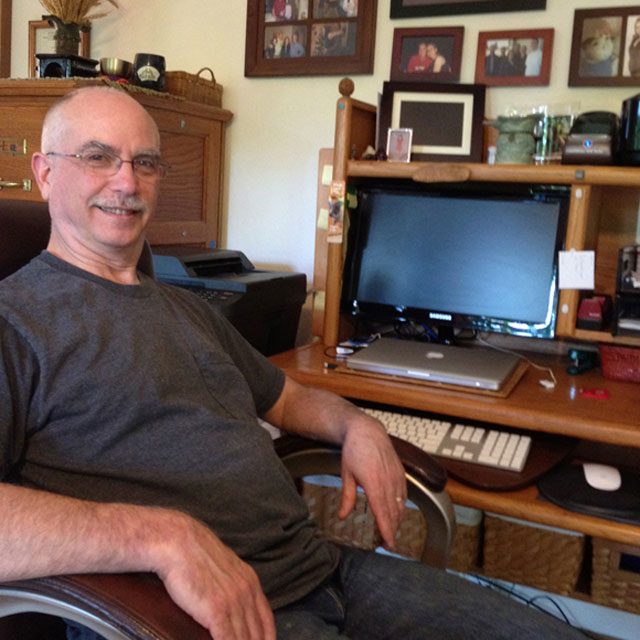 Parami Press, a one-man publisher of Buddhist books tucked away in suburban Vancouver, Wash., in June published its fifth title: “One Monk, Many Masters: The Wanderings of a Simple Buddhist Traveler.”

The book is a memoir of Paul Breiter’s experiences as a Theravada monk in Thailand, followed, after he disrobed in 1977, by his later education and practice in the Zen and Tibetan traditions.

Those familiar with Breiter’s work will recognize him as the author of “Venerable Father: A Life with Ajahn Chah,” (Buddhadhamma Foundation, 1994).

I started Parami Press early in 2006 to publish my own book, “Mapping the Dharma: A Concise Guide to the Middle Way of the Buddha.” 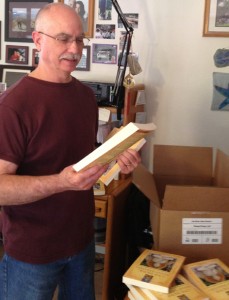 Paul Gerhards inspecting books for quality as they arrive

It began not as a book, but as collection of lists assembled as I learned new things about Buddhism, as a practitioner in the Theravada tradition. I wanted a quick reference to the four of this and the seven of that to help me remember them. Especially I wanted to see—visually as well as intellectually—how everything fit together.

As my collection of lists and other information grew, I began to think other people new to Buddhism might be interested in such a helpful guide. That’s when I got the idea to write the book. Now and then I thought about who might publish it.

Typically, an author would put together a detailed proposal or submit a completed manuscript to a publisher or agent. I had neither a manuscript nor a proposal, because “Mapping the Dharma” wasn’t to be a typical book.

My original idea was grandiose compared to its modest reality. I envisioned a full-color coffee table book with all sorts of art to accompany the text, all of which together would explain the dharma in a visually appealing way. But I was having difficulty coming up with a compelling proposal to send to a publisher, because I hadn’t honed my vision to a set of specifics.

I resolved the publisher dilemma the day I decided to publish the book myself. Although I’d had six books published already (not books about Buddhism, but woodworking and crafts), I knew almost nothing about the business of publishing. But this not-knowing had its virtues because it freed me from thinking about who would be the publisher. And because I wasn’t tied to an agreement I’d made with a publisher, I was able to freely let the book evolve into what it is today. 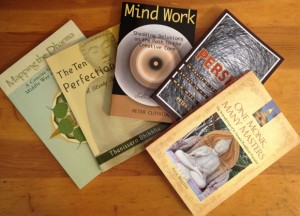 Five books, on Buddhism or inner growth, so far published by Parami Press

Having decided to self-publish, I had to put the manuscript aside for a time, and instead learn about publishing. I spent more than a year studying the publishing business and what it meant to be a “self-publisher” (a word I eventually would use as little as possible to describe myself).

When I felt I had a small but reasonable grasp of the publishing end of things, I established a business entity and returned to the manuscript.

I received good support from Ajahn Chandako, abbot of Vimutti Monastery in New Zealand, who came to Portland at about the same time I’d finished the second or third draft. I asked him if he would look at it, explaining that I wanted to make sure it was doctrinally correct. He agreed and took a copy back to New Zealand with him.

Over the next several months, we had some lengthy phone conversations, as we went over the finer points of Dhamma. All by itself, this exchange was a good education for me.

Not long after I published “Mapping the Dharma,” I sent a copy to Peter Clothier, a writer from Los Angeles with a widely read blog, The Buddha Diaries. He liked the book enough to write a complimentary review.

Sometime later, he asked me to read over a collection of essays he’d put together for possible publication. What came out of it was the second offering from Parami Press, “Persist: In Praise of the Creative Spirit in a World Gone Mad with Commerce.”

Although “Persist” is not strictly about Buddhism, it speaks of the significant influence Clothier’s Buddhist practice has on his work. This also is true for Clothier’s next book, “Mind Work: Shedding Delusion on the Path to the Creative Core,” in which he writes, among many other things, about what he’s learned from Ajahn Thanissaro.

Ajahn Thanissaro also is a regular, if infrequent, visitor to Portland Friends of the Dhamma, where I do most of my formal practice. During his most recent visit to Portland, he gave a daylong retreat on the 10 perfections. At the request of Sakula (Mary Reinard), spiritual director at Friends of the Dhamma, I published Ajahn’s teachings in a volume entitled “Ten Perfections: A Study Guide,” in honor of his visit and birthday.

Sakula and Breiter are longtime friends, and Breiter sometimes passes through Portland on his way to his annual retreat in southern Oregon. Knowing I was looking for another book to publish, and that Breiter had a manuscript looking for a publisher, Sakula arranged a meeting at her home. After talking over our mutual interests, he gave me a copy of the manuscript that would eventually become “One Monk, Many Masters.”

Among Breiter’s other books is “A Still Forest Pool,” a collection of teachings of the famous Thai master Ajahn Chah, co-published with Jack Kornfield (Quest Books, 1985). He also has two other translations of Ajahn Chah’s teachings to his credit: “Being Dharma,” and “Everything Arises, Everything Passes Away” (Shambhala, 2001 and 2005).

0
SHARES
Share
Posted Under: 2012, Dharma Education, Fall
About the Author: Paul Gerhards
Paul Gerhards is secretary of the Northwest Dharma Association and vice-president of Portland Friends of the Dhamma. The Parami Press website is paramipress.com. His personal website is paulgerhards.com. Find him on Facebook at facebook.com/parami.press and facebook.com/paul.gerhards.