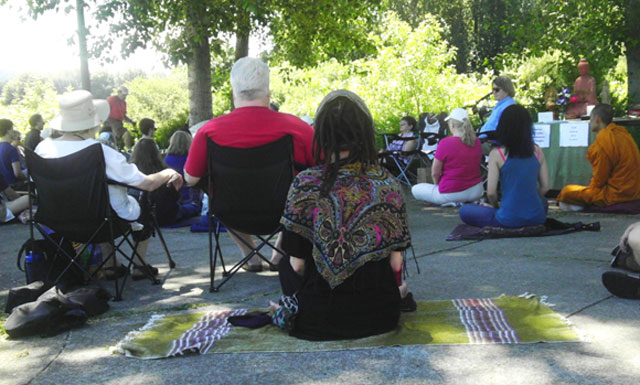 People sitting during the Day of Meditation in Waterfront Park, Salem, OR.
Photos: Julia Chandler

Four meditation centers joined together June 16 to offer a first annual afternoon of meditation at Riverfront Park in Salem, Ore., hoping the event will become an annual tradition.

Our simple, straightforward goal was to introduce the public to meditation, and secondarily to make the groups who participated better known, so newcomers can join us.

The idea for our Day of Meditation was inspired by Tricycle Magazine’s support for annual “Change Your Mind” days, usually in June, where Buddhist groups offer public instruction in meditation, said Rev. Rick Davis, of the Unitarian Universalist Congregation of Salem. 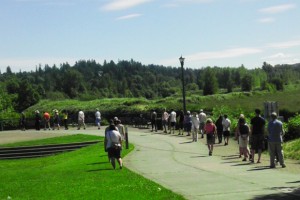 Sunny Jones, also from Unitarian Universalist Congregation of Salem, originated the idea when she was inspired by the possibility of using social media to advertise a gathering.

On June 16 in Salem, the day was hot.  As the coordinators arrived they saw the Buddha’s wisdom in sitting under the bodhi tree … somehow the park amphitheater offered no respite from the heat of the day.

So the groups instead assembled along the river bank to appreciate the afternoon breezes, within the small grove near the water’s edge.   Davis offered a short greeting and welcome, including his hopes that the assemblage could become an annual event.

Each group offered a 30-minute guided meditation.  These provided the perfect opportunity for beginners, as well as for seasoned practitioners with interest in a wider view. 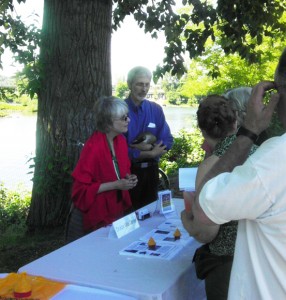 The teacher for the Unitarian Universalist Compassion Mind Sangha and the Salem Zen Center, Lee Ann Nail, began by offering instruction for the alignment of body, breath, and mind for seated Zen meditation.   This created a grounded beginning to the diverse groups meditating quietly together.  She explained the difference between Shikantaza (just simply sitting) and koan study (meditating with a question).

Phra T. Phuangmala of Wat Buddha Oregon, and Phra Kantigo of Wat Chana Songkram Temple in Bangkok, Thailand, both monks of the Theravada Buddhist tradition, explained the correct posture for meditation and breath awareness.    Wat Buddha was very generous in offering a meditation practice manual to each participant.   Their calm presence and grounded nature was felt by all.

Selby explained the traditional opening practices that involve chanting; offerings to the Buddha, dharma, sangha and the three jewels; mudras, and visualization for the enlightenment of all beings.  The group enjoyed the opportunity to meditate through sacred sound. 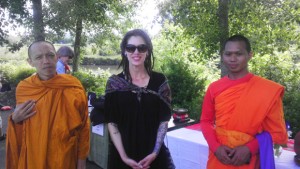 Then Alice Phalan, also from the River Sangha, led the group in a deeply appreciating walk in the park together. Phalan also shared this quote from the book “A Guide to Walking Meditation,” by Thich Nhat Hanh:  “What is most important?  Many people have passed exams and brought houses and cars, yet they are still unhappy.  What is most important is to find peace and to share it with others.  To have peace, you can begin by walking peacefully.  Everything depends on your steps.”

Jones, from the Unitarian church, had initially considered offering a flash mob meditation, and Salem practitioners are now planning to eventually fulfill her vision by offering full-moon meditation in the park, “flash mob” style.

A flash mob is the assembly of a coordinated group of individuals, usually notified by social media to perform a public spontaneous activity.  If you would like to be included in this future event, simply send an email to:  salemzencenter@gmail.com  with “flash mob” in the subject line.

Lee Ann Nail is the teacher for both the Unitarian Universalist Compassionate Mind Sangha and the Salem Zen Center. Her practice background includes 24 years of study at Zen Mountain Monastery and Zen Center of New York City (including extended residencies). She was offered and declined Soto transmission in 2008, and continues her studies with Roshi Ruben Habito (through whom she was given teaching authority in 2010) and Leonard Marcel Roshi.

0
SHARES
Share
Posted Under: 2012, Dharma Education, Fall
About the Author: Donna Selby
Donna Selby is a student of Ven. Lama Karma Namgyel, who is resident teacher of the Drukpa Mila Center in Salem, Ore. When he is away she coordinates the center, and conducts its weekly meditations. For future information about DMC-Salem, please call 503.363.3560 or email: DonnaSelby@comcast.net.