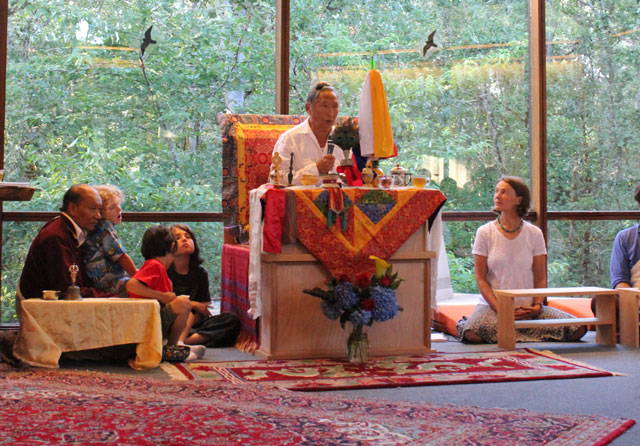 The design of the just-opened Saraha Nyingma Buddhist Temple in Eugene, Ore., reflects the inspired vision of the His Holiness Dudjom Rinpoche, even though the building was originally constructed for a Unitarian church.

The new life of the building was launched in late July by Lama Tharchin Rinpoche, when he conferred an empowerment known as “Heart-Essence of the Lake-Born Guru” upon about 70 students. The empowerment was followed by a “tsok” ceremony, celebrating the event.

Lama Tharchin, a well-known lama in the Nyingma school of Tibetan Buddhism, was assisted in the empowerment by colleague Lama Sonam Tsering, who will lead regular practice at the new temple.

There are many tasks ahead. 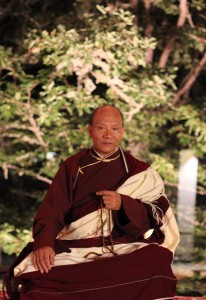 Lama Sonam Rinpoche, who will be one of the leaders at Saraha.

Since July Lama Sonam Tsering has been leading daily practice as well as guiding the continued building improvements. Lama Tsering Gyaltsen is expected to teach regularly there as well, after he returns from Nepal.

Bodhisattva vows were administered for the first time in August, and  the renowned Buddhist scholar, Mindroling Khenpo Tsewang Rigdzin, was scheduled to visit and teach in early September.

The local Eugene community has been entirely welcoming and helpful, expressing enthusiasm and high expectations for the temple’s arrival.  Their continued help will be of vital importance to the temple’s success.

These events, along with the founding of the temple itself and the creation of the operating organization, the Saraha Nyingma Buddhist Institute, are the ripening fruit of blessing, faith and positive interdependence. These conditions are rooted in a series of events initiated over 30 years ago, at this same location.

One version of this story goes like this:  In November 1980, at the invitation of several local dharma students, His Holiness Dudjom Rinpoche, Jigdral Yeshe Dorje, then the supreme leader of the Nyingma school of Tibetan Buddhism, visited the city of Eugene. While there he taught and gave the “Empowerment of the Lotus Born Buddha, Padmasambhava” at this same location, which was then the home of the Unitarian Universalist Church in Eugene. 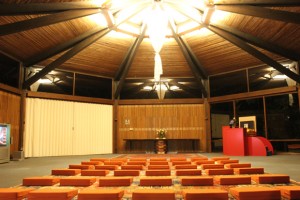 This sublime event is one of many that led to the development of the Nyingma tradition in America, but in the city of Eugene, except in the memories of those who attended, it seems the event itself was forgotten.  Fortunately, however, it was recorded on video.

About 12 years ago, a fading copy of this video was briefly seen by one Eugene student of the Dudjom lineage, while visiting the home of another student.  Then, about a year ago, this same student read a report on the deterioration of various recording media, which reminded him of the video of Dudjom Rinpoche’s teaching he had seen 10 years before. He thought, “That video should be recovered, it should be preserved.”

It happened that he ran into the video’s owner the very next week.  Thinking only to get access of the video to archive it, he asked, “Do you remember that video I saw once at your house, that one of Dudjom Rinpoche teaching?”

The owner answered, “Yes. You know, that was recorded here in Eugene, at the Unitarian Church.  Do you know that church is for sale?” 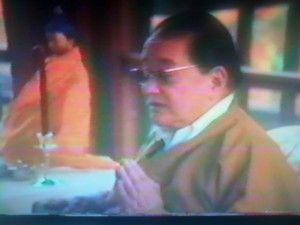 After a few more delightful twists and turns, about a month later, this information was shared with Lama Sonam Tsering, Lama Tsering Gyaltsen and Lama Tharchin Rinpoche, of the Vajrayana Foundation in California, all of whom were direct students of Dudjom Rinpoche. This quickly led to the creation of the Saraha Nyingma Buddhist Institute, and shortly thereafter, to the acquisition of the church property for the institute’s home.

It was not just that one day of Dudjom Rinpoche’s visit that made this property appealing to the institute.  Since its construction in the early 1960s the building has been continually blessed by the visits and teachings of many spiritual masters, from the vast array of positive spiritual traditions the Eugene Unitarians open-heartedly embrace, including numerous Buddhist teachers from all traditions.

And the building itself is intrinsically beautiful.  Situated on over two acres of forested property, its design emphasizes natural wood inside and out.  Its form consists of a long rectangular entry hall leading into a large upper shrine room in the shape of a perfect octagon, which in turn is centered upon a lower floor in the shape of a perfect square.   The main walls of the shrine are large panes of glass that look directly out into the lovely forest outside. 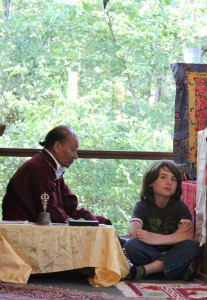 Lama Sonam Tsering and a youth from the sangha.

The original architect, who was a member of the Unitarian congregation at the time, said in a recent interview that he intended the octagon to represent circularity, boundlessness, and not being limited by any fixed dogma.  Moreover, the glass walls were meant to reveal the experience of engaging the universe directly, without separation from natural spirituality.

But even more than this, even beyond its positive history and its intentional beauty, the structure of the temple was found to be specifically analogous to the distinctive design of Buddhist temples that Dudjom Rinpoche himself had constructed during his lifetime, first in Tibet and later in India. This design was inspired by Rinpoche’s own pure vision, depicted in writings from his youth in the early part of the 20th century, of Buddha Padmasambhava’s pure land temple residence. Features from this depiction, such as the building’s square base and octagonal second floor, its skylight, the porch and the park outside, with peaceful animals roaming freely, all are seen in the Eugene temple.

One wonders what Dudjom Rinpoche must have thought when he first entered this ready-made reflection of his vision in Oregon 32 years ago. 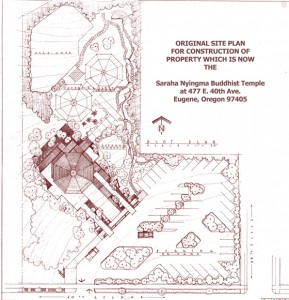 The site plan for the Saraha temple grounds.

Thus the Saraha Nyingma Buddhist Institute was created through the convergence of positive conditions such as these, and primarily through the living faith, knowledge and compassion of its founding directors, Lama Tharchin Rinpoche, Lama Sonam Tsering, and Lama Tsering Gyaltsen. All three are lifelong dharma practitioners, properly educated and trained in the dharma, and holders of pure lineage with unblemished records of service to the dharma and sentient beings.

By its mandate, the institute was established “For the preservation, support, practice, study, teaching and propagation of the teachings of the Dudjom Lineage of the Nyingma School of Tibetan Buddhism.”  Because Dudjom Rinpoche, who entered Parinirvana in 1987, was an unparalleled universal Buddhist scholar, lineage-holder, vajra master and practitioner of the dharma, this lineage actually incorporates the entire Buddhist tradition.

Guided by its founding teachers, and as directed by the living reincarnation of HH Dudjom Rinpoche, who is Dudjom Yangsi Rinpoche, Sangye Pema Shepa, the institute will function as a community dharma center in Eugene, and will develop as a broader educational resource as well.  It will support the positive continuity of dharma practice for families and individuals in daily life and in all phases of life, from childhood through old age and dying, unto the realization of Enlightenment.

Hereafter, one-by-one and day-by-day, kind-hearted members and volunteers will work to reveal the enlightened Buddhist tradition of the Dudjom lineage, as a vibrant and unfading reality here.

0
SHARES
Share
Posted Under: 2012, Fall, Sangha News
About the Author: Kalzang Thrinley
Kalzang Thrinley is a member of the Saraha Nyingma Buddhist Temple, and practices in the Nyingma tradition of Tibetan Buddhism.