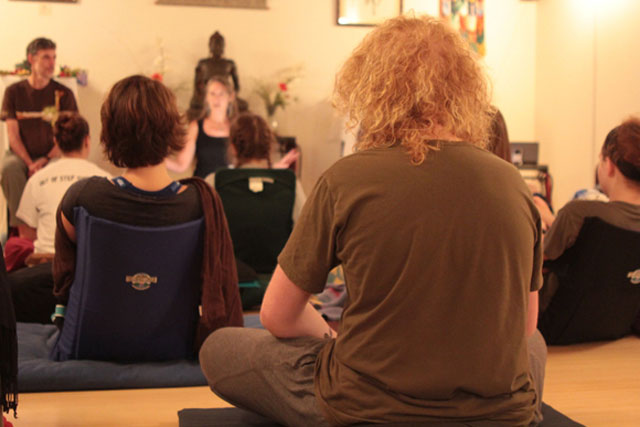 “How many of you think teenagers can meditate?” asks Joe Klein, director of Inward Bound Mindfulness Education (iBme), on the first evening of the Pacific Northwest Teen Meditation Retreat this August.

All hands in the room go up.

“How many of you are ready to be challenged?”

Nearly all hands go up again.

Although many of the teens have some doubt about their capacity to meditate, Klein is confident and reassuring. He tells them about the many retreats he’s led across the country, in which teens have committed themselves to this retreat format and found it to be a very positive experience, even if difficult at times.

Earlier in the day the 16 teenagers surrendered their phones, said goodbye to their parents, and were given an orientation to Cloud Mountain Retreat Center–thus initiating one of the first meditation retreats specifically for teens in the Pacific Northwest.

When asked what they are most nervous about, some said it was not eating meat for five days. Having to get up early. Not having more unstructured time.  Missing the Olympics.

Like adults, they are coming on retreat for reasons as varied as they are.  Some want more calm and focus in their lives, or specific tools to help with school stress, depression, or difficult relationships. Others have been nudged by parents or relatives who are meditators.

A few have more specific aims. 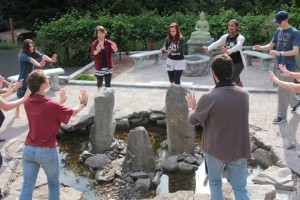 Teens explore Qi Gong in the garden at Cloud Mountain.

One 16-year-old said she wanted to be able to tell the difference between her anxiety and her excitement. Another said, “I want to know how my mind works and what motivates me.”

Although the teachers tried to ensure that teens are coming with some degree of their own curiosity and motivation, rather than solely at their parents’ urging, this isn’t always possible.

“My dad said I could quit piano lessons if I came to this retreat, so that’s honestly why I came,” said one 15-year-old, “but I’m really glad I did.”

The retreat structure involved a very deliberate weaving together of periods of formal sitting and walking meditation practice, group interaction, creativity and mindful movement. The schedule is rigorous but allowed for breathing room, as Klein put it, so that along with spending time in silence, and learning tools for understanding their own minds, the teens also had free time in which they could just be together.

This rhythm of allowing mindfulness to be directed inward toward one’s own experience, as well as outward into movement and relationship, is a theme that ran through the five days, and is intended to help prepare them for daily life back home.

Lead teacher Dori Langevin, who also teaches teen, young adult, and family retreats at Spirit Rock and Insight Meditation Society (IMS), said that this structure is part of what draws her to teach these retreats.

“I love the relational in-vivo dharma, where we practice mindful awareness and loving- kindness as we learn, play and talk together,” she said. “Life is the meditation hall, and it is where we can actually put into action what we discover on the cushion.”

The unique structure of teen retreats has evolved over 20 years of practice and experimentation.

Vipassana teachers Michele McDonald and Steven Smith were on retreat at IMS with the Burmese master U Pandita in the mid-1980s, when he is said to have commented: “It’s great what is happening here, everyone so committed to meditation practice. But my question is, ‘Where are all the young people?’” 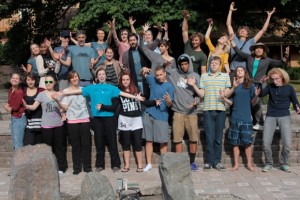 Teens, staff, and teachers on the final day of Teen Retreat.

At his urging they held the first teen retreats at IMS and slowly, through trial and error, developed a retreat model that worked well for teens. Inspired teachers took the model to the West Coast, and later to other parts of the country.

Inward Bound Mindfulness Education was established in 2010 as a non-profit organization to help manage the retreats.

During the Cloud Mountain retreat, each evening everyone scooted forward in the meditation hall, camp-fire style, to listen to a “wisdom talk” given by the teachers. The talks were very interactive, and there were often props.

The teachers used a rubber model of a brain, to show which structures contribute when we operate from habitual reactive patterns. To everyone’s delight a teacher threw a pink ball filled with glitter into the air, to show what a preoccupied, stirred-up mind feels like.

Mindfulness practice was compared to training a puppy, which good-naturedly keeps wandering off and needs to be brought back, gently, again and again.

While many of the teens said they found it hard to focus during the eight half-hour periods of sitting and walking meditation each day, they were quick to offer their observations.

“I notice that sometimes I am now able to choose where I put my attention,” said one 16-year-old. Another realized that her hands slowly clench into fists, without her being aware of it.

At the end of the retreat, one 17-year-old said, “I didn’t realize how much bottled-up pain I’ve been carrying, but I learned that peace is also present within me.”

To maintain a strong and safe retreat container, a team of eight volunteer staff sat with the teens in the meditation hall. The adults, whose ages ranged from their mid-20s to their 60s, also served as dorm parents, led mindful movement practices, and offered workshops every afternoon.

Many of the teens said the time spent in small groups was their favorite part of the retreat. In facilitated groups of eight or nine, they are able to ask questions about the meditation practice, play games, and share aspects of their lives that might be more difficult.

“I was surprised that I could open up to everyone on retreat and very quickly love them as family,” said one 18-year-old.

The retreat seemed to have had an equally powerful impact on the staff.

“I have to say that I may not attend another adult retreat,” said one staff member, who is also a member of Seattle Insight Meditation Society. “In all my years of practice this is the first time I have ever felt that I could bring all of myself to a retreat.”

In the closing session, the teachers offered resources for continuing a meditation practice and staying connected to others. Some of the metaphors used during the week seemed to have stuck.

“You just have to walk the puppy every day so it doesn’t get fat!” said one teen.

As Klein predicted, a strong sense of community was established during the five days, and many were reluctant to leave.

“So how many of you would be interested in coming back on retreat again next year?” he asked. All the hands went up.

There was a feeling in the hall not only of a new generation emerging, but also of a sangha that is truly intergenerational.

One staff member reflected, “We learned once again about the universality of the human condition. We all have deeply-held beliefs about who we are and how we function in the world. The challenge of meditation to loosen our grip on those beliefs is the same, regardless of age.”

Inward Bound Mindfulness Education (iBme) offers mindfulness retreats and in-school programs for teens as well as for parents, educators, and other professionals. More information is available at iBme.info.

0
SHARES
Share
Posted Under: 2012, Dharma Education, Fall
About the Author: Keri Pederson
Keri Pederson is a Local Dharma Leader at Seattle Insight Meditation Society, and assisted the teachers on the Teen Retreat.