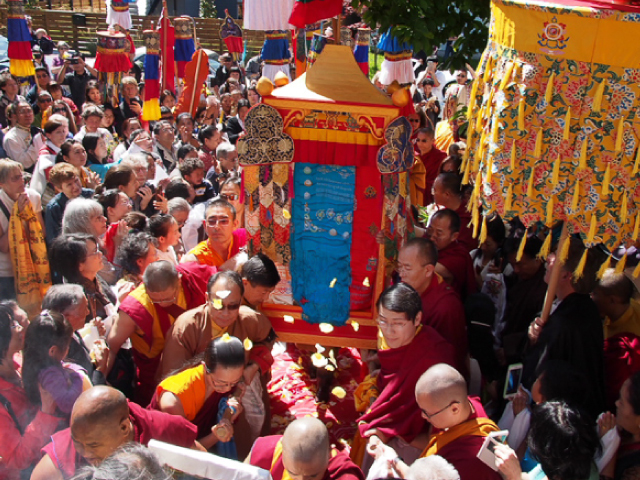 His Holiness Jigdal Dagchen Sakya, the founder and for decades leader of Sakya Monastery of Tibetan Buddhism in Seattle, has passed into Paranirvana.

Known more formally as His Holiness Vajra Dhara Kyabgön Dagchen Rinpoche Ngawang Kunga Sönam of the Phuntsok Phodrang, he died on April 29th, 2016. He was 87. 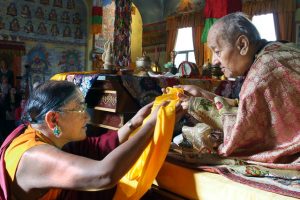 His Holiness Dagchen Rinpoche was weak for some months, but continued on with indomitable resolve and spirit. During this time noted lamas H.H. Sakya Trizin and H.E. Dzongsar Khyentse visited Seattle to perform elaborate long-life ceremonies for Dagchen Rinpoche, based on classic texts.

As a result of these prayers and others from around the word, H.H. Dagchen Rinpoche was comfortable and enjoyed relative well-being as he approached his paranirvana.

At the moment of his passing he entered into a state of luminosity for six days, which is known as Thukdam meditation. During this period a highly realized lama is able to meditate on the “clear light stage,” the ultimate process of the inner dissolution of five elements and consciousness. 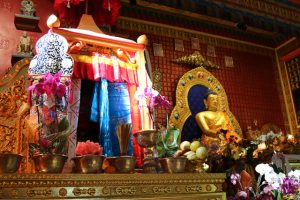 The palanquin bearing the Ku-dung (Holy Body) rests in a place of respect in the Sakya Monastery shrine room.

After Dagchen Rinpoche emerged from Thukdam, Sakya Monastery sangha and friends were invited to pay respects to his Ku-dung (Holy Body) on Friday, May 6.

The day dawned clear and warm. The sangha gathered at around 10 a.m., organizing a traditional welcome for a great lama.

Two truckloads of orchids were placed up the steps of the gompa (temple) and around the stupa. Many held circular and flat banners suspended on poles, as well as flowers and incense.

HH Sakya Trizin and members of the extended Sakya family quietly arrived, and proceeded into the gompa to prepare for the arrival of H.H. Dagchen Rinpoche’s Ku-dung.

A large white Dodge cargo van arrived carrying the Ku-dung. The rear doors swung open to reveal an ornately decorated palanquin in the form of a curtained tent. This was hand-crafted by long-time devoted student John Vichorek, following specific instructions from Khenpo Kunga Dontrup of Pema Tsal Institute of Pokhara.

His sons and grandsons reverently lifted the Ku-dung, and carried it upstairs and into the gompa. 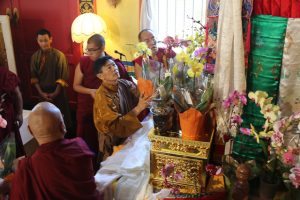 As an emanation of Manjushri, the extraordinary wisdom that he possessed and skillfully exhibited will be sorely missed by our sangha and by all sentient beings.

His all-encompassing compassion as an emanation of Avalokiteśvara inspired a light and open spirit in all who encountered him.

His bodhicitta was so evident. His humor always lightened the atmosphere.

One of my favorite lines of his frequently came at the end of an empowerment or teaching. He would declare with finality, “OK , back to samsara!“ It never got old.

From Tibet to creating vibrant institutions in Seattle

His Holiness Jigdal Dagchen Sakya was born in Tibet in 1929. He was educated to be the head of the Sakya School of Tibetan Buddhism. However, the Communist Chinese occupation of Tibet forced him to flee with his family to Bhutan, with the Chinese army on his heels.

This was the beginning of the path that transformed him into a leader in the transmission of Tibetan Buddhism in the West. 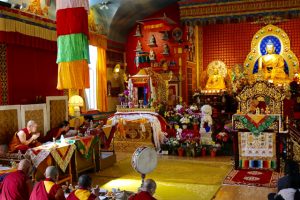 This enabled Dagchen Rinpoche to bring his family to Seattle, including his wife, H.E. Dagmo Kusho Jamyang Sakya, and their sons. Accompanying them was her uncle, H.E. Dezhung Rinpoche III.

In 1974 His Holiness Jigdal Dagchen founded the first Seattle Sakya dharma center, Sakya Tegchen Choling. After the expanding sangha outgrew several spaces, in 1984 he purchased a church in the Greenwood neighborhood of north Seattle, to convert it into the Sakya Monastery of Tibetan Buddhism.

Over time a skilled and determined team of volunteers lovingly transformed the former church into a very traditional Tibetan Buddhist temple. Tibetan  painters came to Seattle to complete the traditional ceiling and wall paintings, including a huge dharma wheel.

Walk into the temple today and you are transported thousands of miles east and into another time.

Lineage is all-important in Tibetan Buddhist tradition, and H.H. Dagchen Rinpoche’s lineage is noble and revered for its holiness, extending back for more than 1,000 years.

From the 13th to late 14th century, the family ruled all Tibet at the behest of Kublai Khan. The lineage is unique within Tibetan Buddhism in that not only is it a spiritual lineage, as are the other three schools of Tibetan Buddhism, but is a hereditary one as well.

His Holiness Jigdal Dagchen left a lasting legacy with the many who studied under him and followed him.

David Spiekerman, president of the Sakya Monastery Board of Advisors, relates this story:

“I was asked to sit with H.H. Dagchen Rinpoche as his security person at one of our Losar celebrations several years ago. My focus was to observe the visitors, well-wishers who headed our way and to keep things calm. 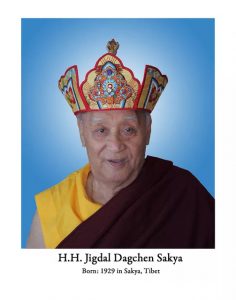 “In fact, it was H.H. Dagchen Rinpoche who kept things calm.  In our moments together when there were no visitors and we sat undisturbed other than by my random thoughts, I began to experience a profound and incomparable peace of mind in Rinpoche’s presence.

“I have sat with many friends and strangers in my 69 years of this lifetime, and I have never experienced such a deep and abiding calm.  H.H. Dagchen Rinpoche personified and shared the enlightened mind freely and naturally.  If one was fortunate enough to pay attention with him, one experienced the unfathomable tranquility of the mind.  I did not have to jabber and chat to be connected to a great dharma master.”

Moses Tovar, a volunteer and sangha member, had this to say:
“My youngest son was battling cancer. He had been through a couple of surgeries and was entering chemotherapy.  I had a series of conversations through this very difficult time with H.H. Dagchen Rinpoche. He guided me through this very difficult period and gave me advice on how to approach myself and my son. At the same time he gave me pith instructions on the dharma, and also instructed me on specific prayers and meditations to do.

“The most remarkable thing happened. One day, H.H.  Dagchen Rinpoche was making his way back inside the monastery. As he passed he noticed me and stopped. He put his hand on my arm and asked me how I was doing. Then he asked me how my son was doing.

“When he touched my arm the full force of his wisdom, compassion and strength fell upon me and filled me with such joy. It was truly amazing!

Through H.H. Dagchen Rinpoche’s grace I was able to weather this storm, and I am happy to say that my son is still with us and doing well.”

Yes, the passing into Paranirvana of His Holiness Vajra Dhara Kyabgön Dagchen Rinpoche, is difficult. Yet the Sakya family has persevered through the centuries.

90
SHARES
Share
Posted Under: 2016, Sangha News, Summer
About the Author: Tim Tapping
Tim Tapping practices with Sakya Monastery of Tibetan Buddhism in Seattle, and is president of Northwest Dharma Association. He works as a software engineer at Expedia travel in Bellevue, Washington, and leads a meditation group there. He lives in Sammamish, Washington, with his wife and daughter.