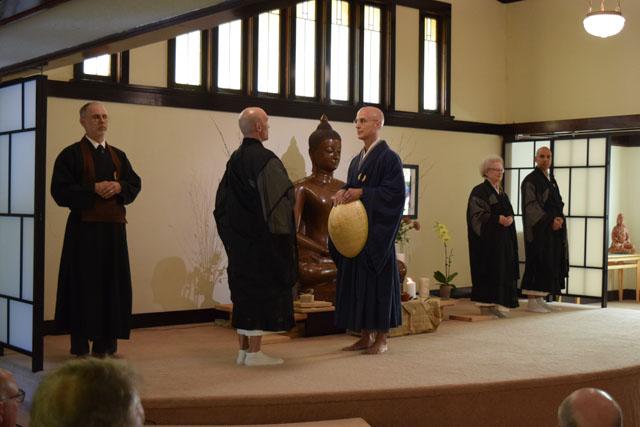 This Oct. 5 transmission, known in Japanese as inka, empowers Osho to carry and transmit the Rinzai Zen tradition to future generations. 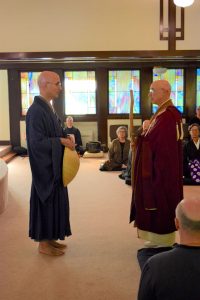 Rinzan Pechovnik Osho founded No-Rank Zen Temple in Portland in 2013. He began leading sesshins there after he was made an osho, full priest, in 2016. This inka ceremony is the final step in his empowerment.

Through the process of Dharma transmission a Zen teacher acknowledges a wondrous heart-mind-to-heart-mind recognition with a student. This links the student with the unbroken stream of Zen lineage, tracing back to the historical Buddha. 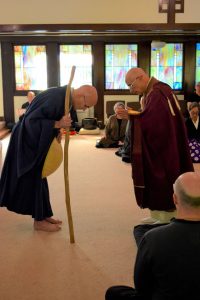 Having conferred the title of Dharma heir on Rinzan Pechovnik Osho — symbolized by the passing of the staff of teaching authority — Rinzan Osho bows in respect and appreciation to his teacher, Genjo Marinello Roshi.

Sixty guests attended. Shakuhachi music performed by Onsetsu Evan Cordes set the tone, while the honored guests entered in procession followed by the sounding of the wooden han, bringing the audience to attention before Genjo Roshi entered the room.

After Roshi made prostrations, four peers serving as Dharma gates took their places to act as barriers through which Rinzan, dressed in simple pilgrim’s robes, had to pass before presenting himself to Genjo Roshi.

Each Dharma gate posed a question, or koan, to Rinzan. When satisfied with his answer, they shouted “Hai!” — the Japanese word for “Yes!” — affirming their approval and letting Rinzan pass on.

When Rinzan finally presented himself to Genjo Roshi, the latter asked a series of final challenging questions, each pointing to Rinzan’s motivation for taking on the teachings as a student and for sharing them as a teacher. When satisfied with Rinzan’s answers Roshi firmly stamped a ceremonial staff on the floor before handing it to Rinzan. This symbolized the transmission, or recognition, of Rinzan as his Dharma heir.

Rinzan departed briefly to change out of pilgrim’s robes into more formal attire. Upon returning, Rinzan participated in ceremonial chanting. Then with the four Dharma gates as witnesses, he prostrated himself while chanting the names of both female and male Dharma ancestors stretching back through the millennia, formally joining them in the lineage. 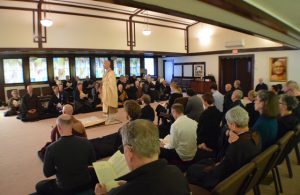 At the end of the chanting Genjo Roshi made a short speech, emphasizing the heart-mind-to-heart-mind recognition. He spoke of his trust in Rinzan’s ability to carry the Rinzai Zen lineage forward to the next generation, mentioning the never-ending maturation process that requires investigation into one’s own psychology and character.

Roshi also spoke of the need to bring ever-increasing inclusivity into the practice. He emphasized the need for continued harmony with other Dharma groups.

Rinzan then gave his first teisho, a lecture distinguished from a regular Dharma talk as coming from one who has received transmission. He presented a koan from the “Rinzai Roku” (the recorded teachings of Master Rinzai) on the “True Person of No-Rank.” This koan honored the name of No-Rank temple, as well as Rinzan’s full entry into the Rinzai lineage:

“From your lump of red flesh there is a true person without rank who is always going out and coming in through the face. If you have not yet testified to this, look! Look!” 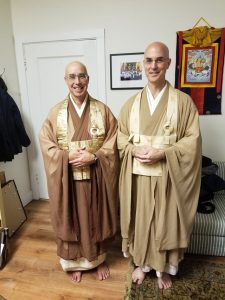 In his Teisho Rinzan spoke of the fundamental ordinariness of practice and the realization of our deep nature that already flows through all of us.

Rinzan said the true person of no-rank that Rinzai speaks about shines through all things. This is already true, he said. We simply don’t yet realize it.

Rinzan said that with his practice and the guidance of his teachers, beginning with Hogen and Chozen Bays Roshis from Great Vow Monastery, on through Genjo Roshi, he has come to see this deep nature for himself.

But true realization, he cautioned, comes not from merely experiencing the brightness that shines forth. One must act from it. True realization is not simply knowing this truth but functioning from this truth.

He said Zen practice teaches us to live in the world in such a way that the light shines through us in how we care for the world. In this way our practice is never-ending, and maturation on the way is manifested in a very ordinary and obvious manner. The true person shines through us in a mere hand-shake, or raking leaves, or picking up someone’s spilled bag of groceries, or handing a couple dollars to a person in need. 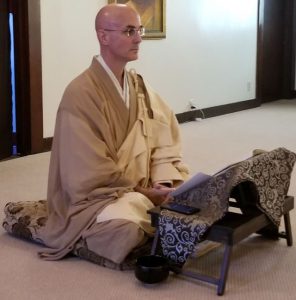 The Dharma Transmission ceremony ended with chanting the four great bodhisattva vows. The first of them, “However innumerable beings are, we vow to care for them all,” echoed Rinzan’s teisho.

Rinzan lives in Portland with his wife Anne. He also works as a practicing psychotherapist.

Cort Smith began practicing Buddhism with a small, interdenominational sitting group in Sacramento more than 20 years ago.  Upon retirement from university teaching he moved to Portland and sat with the Zen Community of Oregon for a number of years, before becoming one of the founding members of the No-Rank Zen Temple.