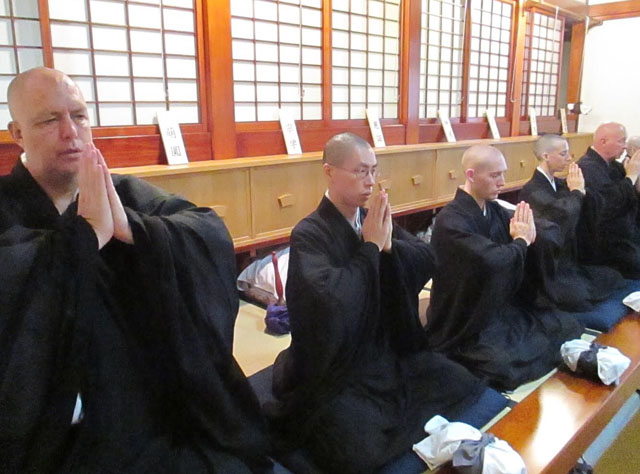 “I had no idea he was a priest!” I heard this exclamation over and over again at a memorial I attended in October for my Zen teacher Ryuzen Robby Pellett, who passed away at age 62 in August.

To me he was founder and priest for One Pine Hall, a Soto Zen center based in Seattle. 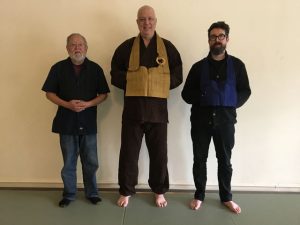 And while most of the eight other memorial services around the U.S. honored his role as a Zen leader, on one sunny fall day in 2019 I found myself at an official Washington State function honoring Pellett’s career as a mental health professional.

I had been invited by the state to come speak about Pellett’s life in Zen Buddhism, which is how I knew him. As I looked out over more than 90 people in the small banquet hall in the state capital of Olympia, I heard his essence in the stories people told.

As delightfully mysterious as I found this other side of Pellett – as a very influential mental health professional with a long and decorated state career – so most others in the room found it hard to believe he was revered as a Buddhist leader.

Yet we all felt his presence in the same way: intimidating yet childlike, fiercely compassionate, unbelievably present, and endlessly humble. 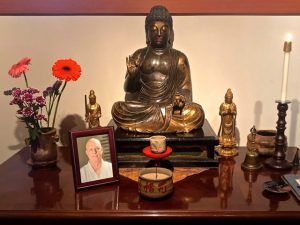 Memorial altar for Pellett at Choboji Temple in Seattle.

As our priest at One Pine Hall, he touched many lives by illuminating the delight in the ordinary and by inviting us to fully imbibe in the mystery of life, one moment at a time. He was so well trained, and so thoughtful and spontaneous.

When my stepdad was dying and I showed up at the meditation group in tears, he did not lapse for a moment as he guided me through meditation that day, and then led all of us in a service dedicated to my stepdad.

Pellett’s highly developed sense of priest craft was automatic. Once as we all sat together on Christmas Eve, he looked up from his chant book during service and said, “Well, it is Christmas, what song should we sing?”

Perhaps this is the only time “’Rudolph the Red Nose Reindeer” was sung in a Zen meditation hall. 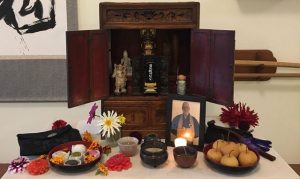 Memorial altar for Pellett at One Pine Hall, the Seattle meditation group he founded in 1994.

Pellett’s dharma talks were extraordinary in their depth and range, making the sacred ordinary and the ordinary sacred. Sometimes we would delve deeply into Zen master Dogen’s work. Other times he would illuminate the season, with a call for noticing the moment or learning about a seasonal cultural element within the context of Zen history.

Or perhaps most famously among sangha members, was his ongoing series of dharma talks that started with, “I was listening to the radio on my drive home and a lyric caught my ear…”

Robby Pellett grew up on a farm in the foothills of the Cascade Mountains of Oregon, his life inspiringly varied and rich. Early on he attended Naropa University, and created multimedia performance works with dance, video, images and sound collages. 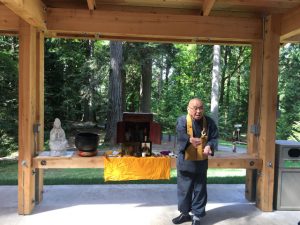 Hoitsu Suzuki Roshi invites attendees to offer incense at a memorial for Pellett at Priest Point Park in Olympia, Washington, in August.

Beginning in the early 1980s he spent more than a decade living in Japan, studying Aikido, Chado, Ikebana, calligraphy and Zen. He studied Soto Zen as a student of Hoitsu Suzuki Roshi at Rinsoin, a temple in Shizuoka prefecture. He became a Zen priest there under Suzuki Roshi and upon his return to the U.S. started One Pine Hall in Seattle in 1994.

With a master’s degree in psychology, Pellett was a designated mental health professional working in Pierce and King counties as well as for the state of Washington, providing mental health services to those in crisis. He also worked as a Buddhist chaplain serving prison populations.

Pellett was unconcerned with seeking out students once he received dharma transmission from Suzuki Roshi in 2010 and became a Zen teacher. His attitude as a priest, even before his time as a teacher, was more like that of an ancient Chinese Zen hermit who just happened to live in a city. 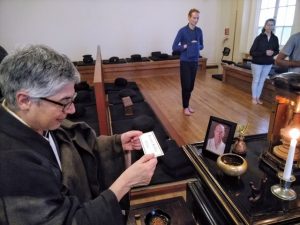 He provided endless direct access to meditation and the dharma. The door was always open, you just had to bring it upon yourself to show up. He often shared that his teacher held in great esteem the friendship between 8th century Zen poets Han Shan and Shih-te, and pointed to their friendship in Zen as a way of life.

Bringing this example up frequently over the years, Robby pressed the importance of having good friends in the dharma, and the positive reverberations this would have for the world as well as for oneself.

The forms of Japanese Zen Buddhism and the intricacies of ceremony are often lost in the Western context beyond the basics, but Pellett – whom you might encounter listening to country music at extraordinarily loud volumes outside the zendo – was deeply committed to these forms whenever he was in monk’s robes. In this way he really took after his teacher Hoitsu Suzuki Roshi, who places great importance on this aspect of Zen practice – serving through ceremony. 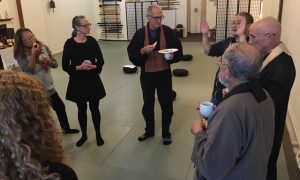 People sharing stories of Pellett after the memorial service at One Pine Hall.

Pellett taught that meditation extends to every movement we make, not just sitting on a meditation cushion. Only recently did I feel I was properly lighting incense at the altar for him, or positioning the ash on the altar set appropriately. But the simple gestures he insisted upon have been like a mirror for me to hold up to myself, to the moment, and to my ever-howling ego.

Pellett extended that ceremonial gesture to all aspects of everyday life: sweeping the floor, enjoying a cold drink, or embracing a loved one. Each was just “moment by moment unfolding,” as he was fond of saying.

Since my teacher’s passing in August there have been at least eight memorials for him that I know of around the country, primarily in the Zen context. And after being part of three of those memorials, I thought a lot about Pellett’s dharma name, Ryuzen. 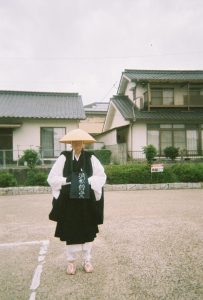 Pellett at Toshoji in 2015, during three months of intensive practice called an ango.

When we take the Bodhisattva precepts in Zen, which is sort of like confirmation in Catholicism, the teacher we study under gives us our dharma name. So in Buddhist world we all knew him as Ryuzen.

There are two characters in this name. The first character Ryu means dragon, and the second is Zen. In Japanese Buddhist iconography the dragon represents lay people, Buddhists who are just everyday people not priests.

As we knew and experienced him, Pellett did not live in a temple or monastery most of his life, he was very much immersed in the world. So he really lived out his name, a dragon of Zen, bringing his amazing spirit directly into the everyday world wherever he went, living out his Bodhisattva vows.

That particular summer day my teacher seemed to bow longer than usual, and I was already up before he was. I watched the dedication in his hands – he truly bowed with every ounce of his being. saluting the void, the empty circle, saluting me, saluting the universe and all beings in 10 directions.

As wild an experience as the initial memorial was, it was a perfect bookend to a season of getting to know my teacher better through meeting the wider world that knew him.

A week after I found out he had passed away in August, I found myself at Priest Point Park in Olympia, with a handful of other people including Robby Pellett’s niece, his best friend, and the One Pine Hall sangha. We were waiting for Pellett’s teacher Hoitsu Suzuki Roshi to arrive in a car with his family. By chance Suzuki Roshi was visiting the United States from Japan that week, and had been planning to meet Pellett the very day of the memorial.

The hastily-gathered group listened as Roshi spoke of his student, calling him Ryuzen. We all were drawn into a trance chanting the Heart Sutra over and over, and taking turns offering incense. As plumes of incense smoke gathered, sunlight broke through the trees illuminating this offering, Ryuzen’s spirit as alive as ever, a lantern to us all.

Jion Nat Evans is a Soto Zen Buddhist based in Seattle. He has been practicing Zen at One Pine Hall since 2004, and was a student of the late Ryuzen Robby Pellett. Evans is an interdisciplinary artist and composer whose works are regularly presented across the United States as well as internationally. Upon taking the precepts with Pellett in 2012, he received the dharma name Jion which means “sound of compassion.” He takes this name as a mandate to suffuse his work in the arts with compassion, through sound and his study of Zen.