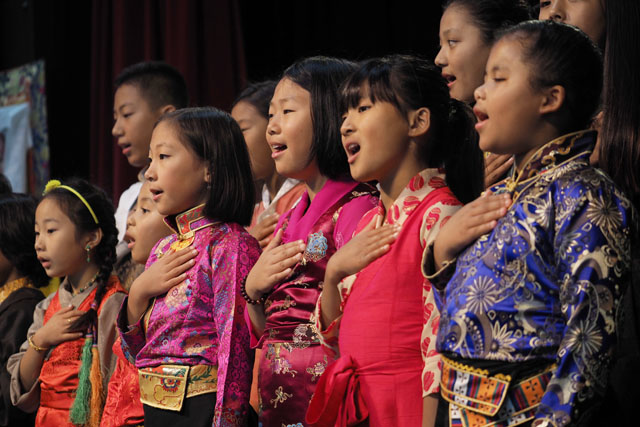 Children from the Tibetan Language and Culture School sing the Star Spangled Banner to open the event.
Photos by Kurt Smith

TibetFest will celebrate its 25th anniversary with a traditional dance performance of the assassination of a ninth century Tibetan emperor by a Buddhist monk.

While the theme may seem a bit grim for a family-friendly event at the Seattle Center, it reflects how strongly Tibetans feel about protecting their Buddhist heritage.

In the ninth century Buddhism was in danger endangered after Tibetan Emperor Lang Darma ordered monasteries closed, and monastics to disrobe. In response tantric monk Lhalung Dorje decided to defend the Dharma by planning to assassinate the emperor. 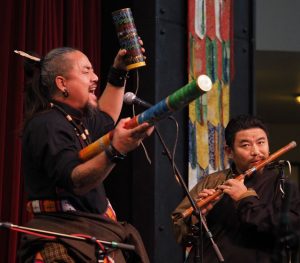 Artist Tamdin Tsetan singing and Lobsang Gyaltsen on the flute.

This sacred dance will be one of several special performances during the Aug. 22-23 TibetFest weekend for 2020.

TibetFest is organized by the Tibetan Association of Washington, and is one of a series of ethnic diversity events hosted by the city of Seattle every year at the Seattle Center, through the center’s Festal initiative. TibetFest, and other ethnic festivals throughout the year, reflect the city’s openness to sharing and celebrating the community’s diverse cultures.

The Seattle Center is a downtown campus of buildings, lawns and gardens that were once the site of the 1962 World’s Fair.

For the region’s growing Tibetan community, while celebrating 25 years of TibetFest is a noteworthy accomplishment, it’s also a reminder that they’ve been living in exile for 60 years. For many it brings a subtle but significant acceptance that this is not only their community in exile, but their new home. 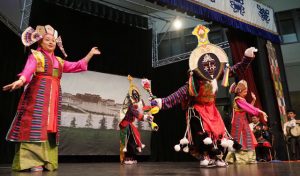 Former artists from the Tibetan Institute of Performing Arts share a Tibetan opera.

“For Tibetans most of us are in exile, holding onto the culture we’ve inherited from our elders and being so far removed from the land of our ancestors,” said Tenzin Tsomo, one of the event organizers. For Tibetans, their culture and Buddhist heritages are virtually inseparable.

While the Tibetan Association of Washington has made great strides to use the event as an anchor to preserve Tibetan culture and the arts, input from the younger generation in the organizing process also has shifted the direction toward exploration and growth.

“As we move forward, spaces like TibetFest give us a reason to come together to share our heritage,” Tsomo said. “We also can engage with contemporary arts and create a platform where we can witness our culture evolve, participate actively, and network with other Tibetans.”

At the same time TibetFest is facing financial and other challenges as it moves toward a quarter century of events. 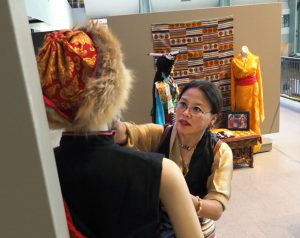 Kelsang Amney fixing up a traditional Tibetan costume on a mannequin.

“There is currently a big void when it comes to a comprehensive event for Tibetan arts, but there is also a lack of funding and accessibility of Tibetan art to the community,” said Sonam Nyatsatsang, a former association board member, and producer of the last two TibetFests.

Because the event is free, organizers have fewer opportunities to raise funds for the festival. A handful of grants have been key, but haven’t supplied enough to create more programs and to utilize the potential of the Seattle Center resources.

“The fact that we as a stateless community have so generously received this honor of hosting and being a part of Festal by Seattle Center in not lost on us.” said Tsomo. “This is what makes our (Seattle) community so great.” 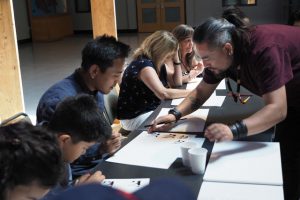 Twenty five years ago the intention of the festival organizers was primarily to preserve ancient Tibetan cultural traditions through dance and performances. The organizers then worked to market the event by playing to its exotic and uniqueness.

The festival is run by an all-volunteer team from the Tibetan community. The organizers hope to make TibetFest 2020 special, as the event’s silver jubilee.

A notable shift toward embracing contemporary creative expression beyond traditional Tibetan song, dance and art reflects the Tibetan Association’s maturity, and the fact that culture is not stagnant. This year international contemporary Tibetan artists from Belgium and elsewhere are expected.

As a younger generation has become involved, a concerted effort is being made to demystify Tibet by including open panel discussions, photo exhibitions and contemporary arts. Organizers have identified this as an opportunity to peel off layers of commonly held misconceptions about Tibetans and Tibetan Buddhists. 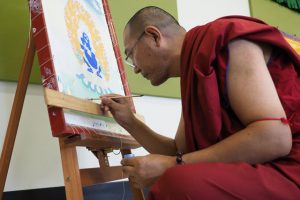 “These voices challenge visitors’ perceptions of Tibet and Tibetans,” said Tsomo “They get a chance to enjoy both the traditional and the contemporary in our arts.”

Last year this started when contemporary Tibetan artist Tenzin Dolma was invited to show her work.

For 2020 new artists will include Rinchen Dolma and Tenzin Chimme, founders of  Made in Exile. This is a youth-led initiative that creates workshops and theatrical performances that support young Tibetans in exploring their identity and in engaging with their community.

For instance Lama Migmar, a Tibetan Buddhist monk from the Sakya Monastery in Seattle, also an accomplished sculptor and thangka painter, will offer thankga painting workshops and quick meditation sessions during the two-day festival. 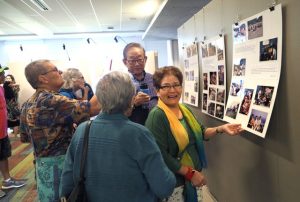 Visitors at the photo exhibition.

Born in eastern Tibet in Kham, Migmar studied at Kegyu Monastery, the largest and oldest Sakya Monastery there. His work is featured in Kagyu, Nyingma and Sakya monasteries throughout Kham. After living in Nepal, India and Malaysia creating an extensive array of thangkas, in 2006 he joined Sakya Monastery as resident artist.

Organizers have increased their sophistication in planning TibetFest, building the festival around the five human senses of sight, sound, smell, taste and touch. This strategy will bring sensory enjoyment to those attending, while maintaining the goal of preserving and promoting Tibetan art and culture.

For instance people will experience smell, taste and touch through a Tibetan food booth selling delicious Tibetan steamed dumplings called “momo,” a favorite of all Tibetans. They’re so popular they almost always sell out. 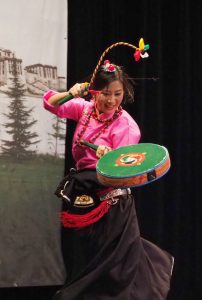 For sight and sound a number of traditional cultural performances will showcase the ethnic richness of Tibet’s heritage. For colors and touch there’s a Himalayan bazaar: a one-stop shopping experience to load up on Buddhist ritual paraphernalia, Tibetan fashion, jewelry and trinkets.

Depending on funding, they may fulfill an ambitious plan to bring a full Tibetan opera troupe to perform at the outdoors Seattle Center amphitheater.

“With funding any effective program or platform will help nurture and expand this very important community of free-expression enterprise.”

Nyatsatsang and Tsomo share a vision of making TibetFest a platform for upcoming Tibetan artists, and a venue for established artists to introduce their new works.

Jamyang Dorjee is a Tibetan Buddhist living in Bothell, Wash., with his wife and two children. He is a former president and board member of the Tibetan Association of Washington. He also sits on the Everett School Board and writes regularly for Northwest Dharma News.