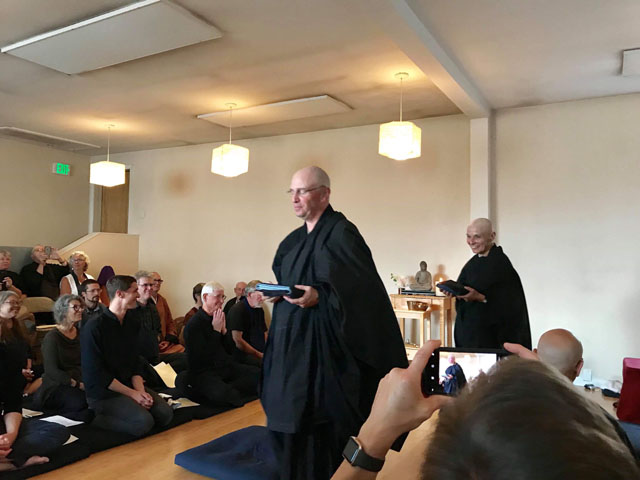 Two of us were ordained as Zen priests in Bellingham, Washington, this September, during a lengthy Shukke Tokudo ceremony at Red Cedar Dharma Hall.

The retirement of long-time teacher Eko Jeff Kelley, and my moving to northeastern Colorado for a tenure-track English faculty position, brought about a literal home-leaving on multiple fronts. The home-leaving was formalized during the Sept. 7 ceremony, but the actual process was a drawn-out, raw-edged leave-taking, one that continues to unfold and manifest in the geography of the heart. 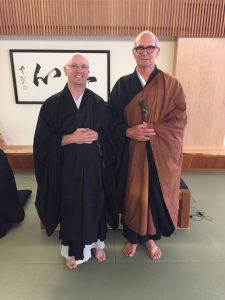 To leave home is to let go. It is first of all to leave familiar surroundings and community, and then to enter new territory and explore its wilderness, to delve deep into the unknown.

Red Cedar Dharma Hall is appropriately shingled in cedar shakes on North Forest Street in Bellingham, just below the fir-and-cedar covered hill where Western Washington University sits. Hanging outside the narrow A-frame house is the han, a wooden instrument that, when struck by a wooden mallet, calls practitioners to the hall for practice.

During the packed ceremony practitioners and family members crowded around on zafus and zabutons, folding chairs and corner benches. Shukke Tokudo is known in Soto Zen as “home-leaving,” and while it is typically an extended process through which the practitioner matures towards priesthood, it also culminates in a ceremony, a specific ritual.

Long-time practitioners and family members of many different social and religious backgrounds gathered for the ceremony from all over the Pacific Northwest, from British Columbia, and from far beyond. They came to honor the intensified commitment to practice these ordainees made. 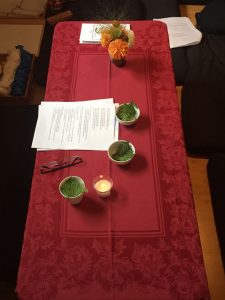 Flowers and boughs on the vestments table.

There was a special energy to this particular ceremony that drew so many, sewing together the fabric of three Northwest Soto Zen sanghas: Red Cedar Zen in Bellingham, Mountain Rain Zen in Vancouver, B.C., and Seattle Soto Zen in Seattle. Each of the ordainees has practiced at all three temples, as have the priests and guiding teachers for each community.

Nomon Tim Burnett of Red Cedar was our preceptor and host, while Mountain Rain guiding teachers Shinmon Michael Newton and Myojin Kate McCandless came down from British Columbia, and Kanshin Allison Tait and Eko Jeff Kelley drove up from Seattle.

There she will give herself to the intense schedule beginning with Tangaryo, a five-day period of uninterrupted meditation. For the next 85 days she will undergo specific temple trainings, perform various required jobs, give a personal “way-seeking mind talk.” This talk is about how she came to practice and become a new monk, one who gives herself seamlessly to the functioning of the residential monastic community. 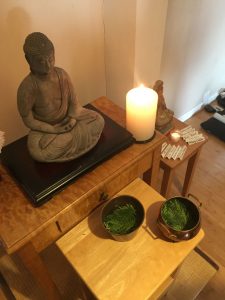 Red cedar offerings on the altar for priest ordination day.

Upon return to Red Cedar she will continue her novice priest training with Guiding Teacher Nomon Tim Burnett.

In my own practice in northern Colorado, I will continue to practice regularly with Prairie Mountain Zen Center in Longmont, under Guiding Teacher Jodo Cliff Clusin. Our Sangha is growing, a lovely mixture of different people with all levels of practice-experience. We soon  hope to offer full residential retreats in the northern Colorado Rocky Mountains.

As I deepen on this journey as novice priest, I look forward to stitching together our regional ties and practice-affiliations more fully.

To leave home and practice as a Soto Zen priest requires three primary commitments, according to the Suzuki Roshi lineage originating at San Francisco Zen Center. These three are to be humble, to see everyone as Buddha, and to try to help.

Each ordainee vows to keep the 16 bodhisattva precepts, which are the ethical guidelines laid down and expressed in compressed form by Eihei Dogen in the 13th century. These vows are a concentrated version of the original ethical vows in the vinaya, the monastic code established by the original Buddha in India. These vows were adapted first from monastic codes in Buddhist China, honed in Japan, and are now transmitted to North America and Western culture more broadly.

To leave home to become a Zen priest traditionally requires letting go of everything, except one robe and one bowl. To enact this aspect of home-leaving today, ordainees in Suzuki Roshi lineage sew their own robes. Stitch by stitch, the priest-to-be sews her or his Buddha robe, a plain piece of black cloth cut into patchwork pieces, then re-sewn in a pattern to resemble rice paddies. 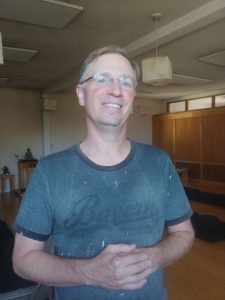 Magie earlier in the day, before the ceremony.

During the sewing the priest-to-be is attentively applied to every stitch of thread. With each stitch the practitioner silently chants Namu Kie Butsu, which means “I take refuge in Buddha.”

In this way the entire community is sewn together into the robe. Within the community of all beings, within the practice of the Dharma, each ordainee humbly sees all beings as Buddha, leaving home and entering the entire universe in the myriad directions. This was the ceremony enacted at Red Cedar Dharma Hall on September 7.

The new priests are novices, entrusted to their teacher for extensive and intimate training. They are also entrusted into the sangha to practice humbly for some years, gradually absorbing and deepening in practice.  These priests deepen in Shakyamuni Buddha’s foundational teachings, the teachings of emptiness, impermanence and no-self.

Very gradually they may take on leadership roles, yet there is no one way. As Lewis Richmond explores in his classic 1979 essay “Ways of Being a Soto Zen Priest in America,” a novice priest may gradually become a residential or lay temple priest, a monk, a scholar, or any number of different roles.

First and foremost novice priests embody upright practice, as they train more deeply and extensively under their teacher and within the spiritual community of the Sangha. While deepening their practice over many years, these novice Soto Zen priests strive to practice the bodhisattva way. They strive in every moment to practice the four great impossible vows, also known as the bodhisattva vows:

Beings are numberless, I vow to save them;

Delusions are inexhaustible, I vow to end them;

Dharma Gates are boundless, I vow to enter them;

Buddha’s Way is unsurpassable, I vow to become it. 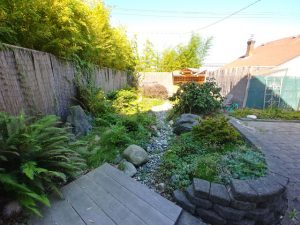 At Red Cedar Zen in Bellingham the weekly schedule is extensive, including informal weekday morning meditation (6:30-7:15am), and more formal programs on Wednesday evenings (6:30-9pm), Fridays at noon, and Saturday mornings (6-8:30am).

At various points during the year Red Cedar Zen (like sister sanghas Mountain Rain Zen and Seattle Soto Zen), offers residential and non-residential Zen retreats called sesshins. These sustained periods of intensive practice are conducted entirely in noble silence, a practice of deep quietude uninterrupted by speech of any kind, or any reading, writing or communication except what is altogether essential.

Noble silence is a container for intensified spiritual practice, one that enables each practitioner to enter her or his own practice and investigation more profoundly and intimately.

Wearing their black robes and sitting upright, novice priests also practice in silence. This provides a quiet embodiment of upright practice, one that inspires and supports the entire community.

Chikyo Ryunin Ewan Magie is a Soto Zen priest in the Suzuki Roshi lineage. Ordained in September 2019 by Nomon Tim Burnett at Red Cedar Zen in Bellingham, he practiced with Eko Jeff Kelley at Seattle Soto Zen the past decade. He has been particularly inspired by the teachings of Zoketsu Norman Fischer, founder of Everyday Zen. Currently Ewan lives in northeastern Colorado and practices with Jodo Cliff Clusin at Prairie Mountain Zen Center in Longmont. He offers classes in basic meditation and sits on the executive board and practice council with both Seattle Soto Zen and Prairie Mountain Zen Center.