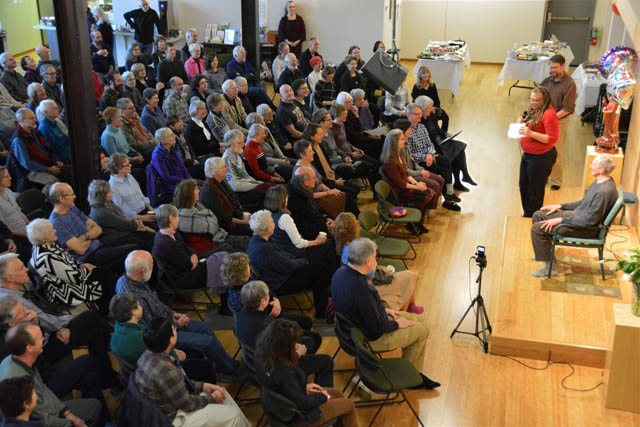 On a Sunday in early January members of Seattle Insight Meditation Society honored Rodney Smith, the organization’s founder and guiding teacher, as he retired from his regular teaching role.

The Jan. 8 event, held at the Seattle Insight Meditation Society center in an industrial zone south of downtown, brought together hundreds of regional Sangha members, past and present. These were just a few of the thousands of people around the country—and the world—whose lives Smith had touched over his 30-year teaching career. 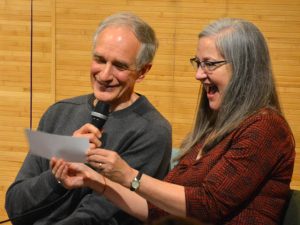 SIMS surprised Smith and his wife Ellen McCown with a gift certificate for a Road Scholar trip, to enjoy in this next phase of their lives.

The event was not just a celebration of Smith or his career; it was a reunion of friends, many of whom had not seen each other for years.  The reflections and thanks people gave in their formal remarks became a collective telling of the organization’s story—recounting its origins, tracing its history, and pointing to its future.

The Jan. 8 program began with the future, as current guiding teachers Tim Geil and Tuere Sala shared what Smith meant to them as practitioners, and what they have taken from his teachings into their new roles.

“A teacher who is steeped in the dharma can help you go to places you would not go,” Sala said. “Rodney was… my guide. We went into some very dark places together and he would help me turn the light on.”

Sooz Appel drew on Smith’s humorous style to remind everyone of his laughter—at himself, at us, at our culture – encouraging us not to take things so seriously.

Smith has helped many in similar ways, she said.

“When you support hundreds of people to face the kinds of things that many of us have faced,” Sala said. “It is the kind of far-reaching generosity that the Buddha set out 2,500 years ago to have us do.”

During the celebration people shared stories and reflections, and reconnected with Dharma friends from years past.  People brought abundant food and drink including a birthday cake, because Jan. 8 was also Smith’s 70th birthday.

A projector in the corner played a slide show:  Smith as a Boy Scout in Ohio, then with IMS staff in the 1970s, later as a shaven-headed monk, and finally with the many people who have been his community during the last 25 years with SIMS. 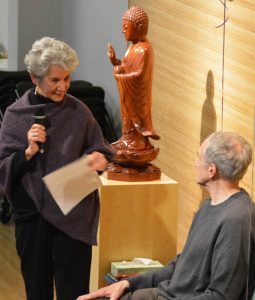 Rosie Schwartz, one of the SIMS founding members, described the early days of SIMS as a Sangha.

As I watched slides of the Sangha gathered in the basement of St. Mark’s Cathedral in Seattle, a place where SIMS people sat for many years, I was transported back to those heady days of having just discovered the Dharma, this teacher, this community.  I felt such gratitude for having walked though those doors and found them all—as if waiting there—available to change my life entirely from the inside out.

I felt gratitude and a sweet, nostalgic sadness. I arrived just 10 years ago, and now of course everything has changed.  Now we were saying goodbye.

Many of us didn’t know much about Smith’s spiritual journey before SIMS, and so former Board President Linda Taggart traced it, starting in Ohio in the 1970s. It was then he first heard Ram Dass speak, and was captivated by Ram Dass’ famous book “Be Here Now.”

Inspired by his reading Smith soon left Cincinnati for more than two years of self-retreat at Insight Meditation Society (IMS) in Barre, Massachusetts. He stayed on as a staff member.

In 1979 Smith left IMS and went to Burma, where he was ordained as a monk by the renowned Mahasi Sayadaw.  From there, he traveled to India to study with Nisargadatta Maharaj, a teacher whose sincere but irascible manner made a lasting impression on him. 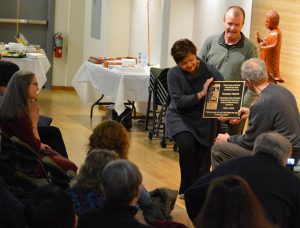 Cora Edmonds and Phil Crean presented Smith with a plaque commemorating his long teaching career and his role as SIMS’s founding guiding teacher.

“It seems that throughout my spiritual journey I am forever being scolded, dismissed, or ridiculed,” Smith said. “In retrospect it was because I was stubborn, and there was no gentle way to crack me open.”

Smith then went to the forest monastery of Wat Suan Mokkh in Thailand, where he studied with Ajahn Buddhadasa for three years.  After further travels and practice in India and England, Smith disrobed and returned to IMS.

“Like most people it took many years for that latent potential, which lies in all of us, to arise on its own in me,” Smith said.

It was at IMS that Smith met his wife-to-be Ellen McCown. He appreciated McCown several times during the Jan. 8 event, saying her “natural kindness, sensitivity, and compassion” are “authentic models for us all.”

After meeting the two left IMS and moved to Houston, where Smith began a career in hospice care.  Smith first started Dharma teaching in Texas in 1985, at the request of his own teachers.

Several years later, after Smith had moved to Seattle to advance his hospice career, a series of events launched what was to become SIMS. 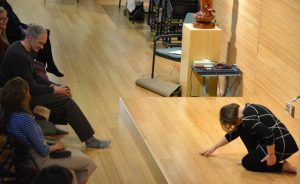 Krista Harris, founder of dance group Interplay Seattle, honored Smith with the dance “The Continuum: The Journey from Noise to Quiet.”

The next speaker, Rosie Schwartz, described how she and several others who had been practicing together in 1992 asked Smith to guide them, after a suggestion from teacher Steve Armstrong. Five years later Schwartz, together with Chris and Evan Prenowitz, asked Smith to take the larger step of quitting his hospice job to become a full-time teacher.

Together these eight dedicated people, including Smith and McCown, worked to create SIMS.  As Schwartz described it the work was demanding but “so intimate and we all cared about it so much.”

From the start the intention was to create community, and to accomplish that with the support of volunteers, said Evan Prenowitz, who spoke after Schwartz.

Sooz Appel, SIMS’s third president, spoke about Rodney’s “quiet achievements.”  She described his laughter at himself, at us, at our culture, encouraging us not to take things so seriously.

She talked about how Smith consistently showed up for many years.  He had the faith to leave his job and dedicate himself to teaching.  And he was committed to lay life, to finding freedom there. 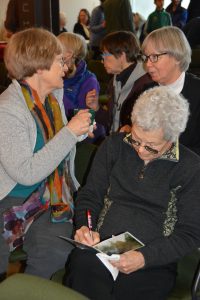 Smith’s retirement party brought together old friends, many of whom hadn’t seen each other in years.

The last presenter, Krista Harris, showed her appreciation by performing a dance she titled “The Continuum:  The Journey from Noise to Quiet.”  With graceful movements that evoked deep emotion, Krista expressed the Buddhist path toward peace and liberation.

Finally, Joyce Michelson, SIMS’s eighth and most recent past-president, presented Smith and McCown with gifts, including a Road Scholar trip to help “enlighten” this next phase of their life.

Past-President Phil Crean and his wife Cora Edmonds, who together donated the SIMS Center, presented a plaque. This included a photo of Smith and a quote from him, “We return to the nothing we are through love.”

Sitting on the stage and witnessing this Smith was moved to tears, and spoke of the importance of Sangha. He thanked the people who had brought SIMS to life and sustained it over the years.

“It is from that central fact that we all have grown together for many, many years,” he said. “And it is that I wish to appreciate tonight.”

As a teacher Rodney was both kind and committed. He was passionate about awakening–that it was accessible here, now, in daily life. This added an urgent, sometimes stern, and occasionally blunt quality to his teaching. At one point during the evening he asked to be forgiven for any pain he might have unknowingly caused over the years. 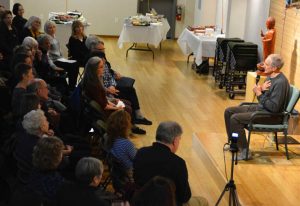 At the end of the presentations, Rodney addressed the sangha, thanking all the people who had given their energy to bring SIMS to life and sustain it through the years.

Smith said retirement is a next phase, adding that he does not know what he will do next. He said he wants to wake up each morning with no forced timeline and no specific agenda, and see what happens.

“I don’t know what that looks like,” he said, “but I look forward to that journey.… There is a new vista available to me.”

“Remember how close this quiet is, this stillness.  Let us commit to never putting any distance between ourselves and this stillness, and let it nourish whatever phase of life we are in, and let the open-heartedness that comes through that stillness fully engage in whatever way feels like the right form and presentation of that engagement,” he said. “These are difficult times.  It needs our heart, and it needs our stillness.”

Many people will now hold the Sangha and will shape its future. SIMS continues to meet for its weekly sit every Tuesday evening. The group hosts multiple additional events each month, ranging from quiet morning sits to talks from world-renowned Buddhist teachers.

As SIMS continues its mission of offering the Buddha’s teachings on insight and awareness to all who seek them, it carries forward Smith’s legacy and the hard work and dedication of the Sangha members who have supported it through the years.

0
SHARES
Share
Posted Under: 2017, Sangha News, Spring
About the Author: Miles Yanick
Miles Yanick has been practicing in the vipassana tradition with the Seattle Insight Mediation Society since 2007, where he has been a member of the board and editor of the SIMS newsletter. He has served on the Ethics and Reconciliation Committee. He also practices law, in the area of civil litigation and dispute resolution, at the Seattle law firm of Savitt Bruce & Willey LLP. He is married and father of two teenagers, and is an avid trail runner. In his spare time, he sleeps.