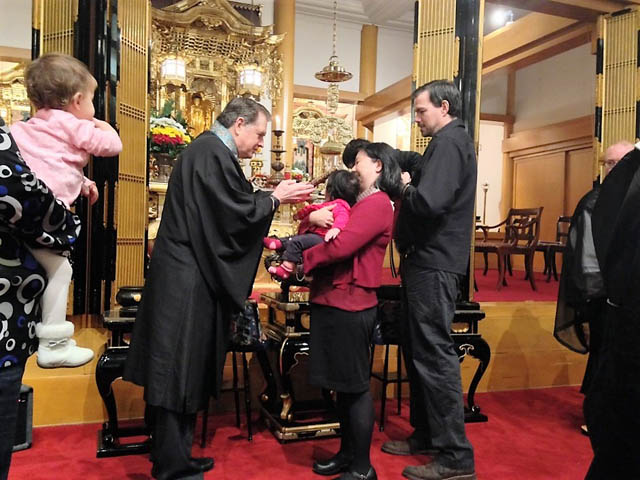 Sangha members said thank you but not good-bye to Reverend Don Castro in November, at his retirement party after serving 31 years as minister at the Seattle Betsuin Buddhist Temple.

Castro is best known for his leadership in ecologically aware Buddhism, and for being only the second non-Japanese person to be appointed head priest of a main branch temple of a U.S. district. The Japanese word for this title is rinban.

Reverend Castro was appointed rinban in 2010 and became the sole full-time minister of Seattle Betsuin. This meant that for the first time, Seattle Betsuin was without a full-time Japanese-speaking minister. 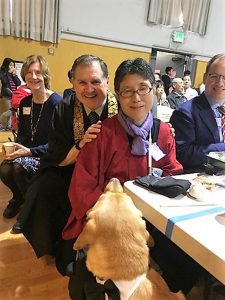 Seattle Betsuin, at 116 years the oldest Buddhist temple in Seattle, is one of 60 temples within the Buddhist Churches of America organization.

Seattle Betsuin is a temple of the Jodo Shinshu tradition of Buddhism, also known as True Pure Land or Shin Buddhism. This is the largest Buddhist sect in Japan, and many first-generation Japanese in Seattle are Shin Buddhists.

Yet Rinban Castro, without speaking Japanese, has been able to relate to the Japanese-speaking and non-Japanese-speaking communities alike. What struck people was his sincere humility, and ability to convey Shin Buddhism in everyday English.

Don Castro’s EcoSangha vision, ahead of his time

In this age of global warming and plastic bag trash islands in the Pacific Ocean, one of Rinban Castro’s major contributions was his EcoSangha concept, his embrace of the inseparability of Buddhism and environmentalism.

“To be a Buddhist is automatically to be both an ecologist and a conservationist. I am not talking here about a narrow definition of ecology,” Castro said. “The Buddhist scholar-professor Francis Cook described Buddhism as ‘cosmic ecology.'”

Buddhism is not just ecology, however,” Castro said. “Ecology is science and Buddhism goes beyond science. Being based on a medical model (the four noble truths) Buddhists are always working for a cure. Ecologists tell us the world is in peril from many sources; conservationists seek a cure. This is why Buddhists are both ecologists and conservationists.” 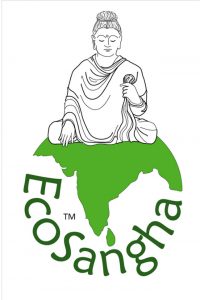 The EcoSangha logo, which Castro hopes will be widely used in the Dharma community.

On a more far-reaching level two years ago Reverend Castro submitted the EcoSangha Resolution to the National Council of the Buddhist Churches of America, which passed it. The resolution calls upon our 60 temples to promote “ecologically friendly behavior in the spirit of mottainai.”

Castro hopes the Earth-touching mudra of the Buddha will be adopted by other Buddhist denominations, as well as by Buddhist Churches of America members, as a symbol of our mutual identity as an inherently ecological and conservation-oriented religion.

With this resolution Castro hopes that, “not only other BCA temples, but other denominations of Buddhism, will adopt the Earth-touching mudra of the Buddha as a symbol of our mutual identity as an inherently-ecological and conservation-oriented religion.”

Over the years Castro’s vision of ecosangha has been incorporated into the work of many Buddhist leaders. 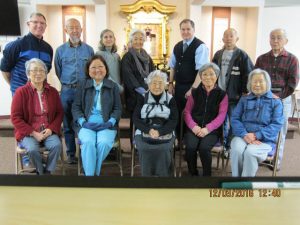 “I have known Don Castro for a decade. He was integral in shaping my thinking about the Zen practice group that I lead, inspiring me to call it the EcoSangha and to make the ecological implications of the Dharma an urgent focus of our practice,” said Jason Wirth, professor of philosophy at Seattle University, Soto Zen priest, and Reverend Castro’s friend. “Don Castro is a great teacher in all that he is and does. From his example I have grown as a Zen practitioner to also appreciate and cherish the way of Shinran (the founder of the Soto Zen school). I am a better person and practitioner from knowing him.”

“Sensei has made the temple a better place for all,” said Hoshino, “From his development of the EcoSangha concept and its implementation by the Betsuin, which included investing in compostable containers and flatware so our Bon Odori festival’s waste could be changed from landfill-bound garbage to earth-friendly compost, to his impact upon the ethnic diversity of our members and ministerial assistants.”

Castro’s EcoSangha concept was acknowledged at the Nov. 20 Sunday music service and retirement luncheon. More than 400 members, friends, and family, from five Northwest District temples, enjoyed the special service in the temple’s main hall. The ceremony was followed by a Japanese boxed bento lunch, in the gymnasium. 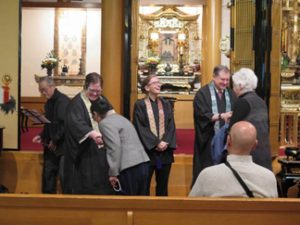 The event featured musical lyrics that included Rinban Castro’s EcoSangha concept and the Japanese word mottainai. Highlights included a skit by minister’s assistants and ministers depicting Reverend Castro trying to clean out his office by reducing, re-using and recycling, as well as the song “Precious Earth.”

This song was written by Reverend Castro, with Musical Director Kemi Nakabayashi, and high school Dharma School students Matt Lee, Brandt Tosaya, and Alex Sakamoto. The song reflected Reverend Castro’s concern and shared responsibility as a Buddhist, in caring for the earth.

As in all our luncheon events, recycling stations were used to separate compostables from recyclables.  Since Seattle SeaFair recognized Seattle Betsuin in 2009 for its recycling innovations during our Bon Odori festival, we have purchased compostable and recyclable food containers and utensils for all our major events. 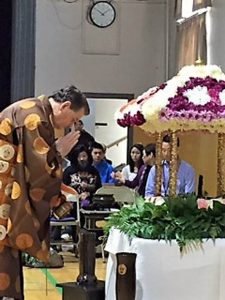 Reverend Castro’s retirement luncheon concluded with sing-alongs and presentations of gifts by temple organizations and cards by individuals. It also included a special presentation of a certification of appreciation from the mother temple, Nishi Hongwanji temple in Japan, by BCA Bishop Kodo Umezu, also a friend of Castro’s.

During the event Rinban Castro circulated among all his well-wishers trying to thank each one, leaving him no time to enjoy his bento lunch. He took it home with him saying, “I may spend my retirement just sending out thank-you cards.”

Of course, Rinban would not say that he has “pulled this cart” alone.  He gives credit to the vast numbers of temple volunteers and past members, who have made possible his accomplishments, and those of the temple.

“What is most important is that we have the eternal Dharma to inspire and guide us,” Castro wrote in an article in the Wheel of the Sangha newsletter. “It is wonderful to see the Dharma manifested in the actions of family and friends.  As Master Shinran wrote, ‘May those who come before lead those who come after, and those who come after, may they follow their predecessors; thus following one after another until this boundless sea of birth-and-death is exhausted.’” 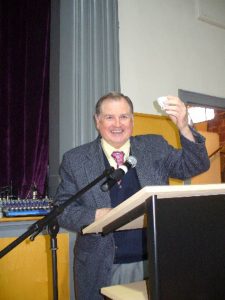 As for his plans for retirement, Castro said, “I don’t plan to go anywhere.”

He continues to conduct services on occasion, to lead Buddhist Book Study once monthly, and to attend Sunday services when he chooses.  He wishes us “all (together) a very happy, healthy and meaningful 2017 in the spirit of the ‘Nembutsu,’” which refers to the primary Shin practice of saying “Namo Amida Butsu,” as an expression of gratitude toward Amida Buddha, the embodiment of infinite wisdom and infinite compassion.

We all wish Castro Sensei, aka Reverend Don, aka Reverend Castro, and his wife Shuri, the very best and much-deserved quality time together. They will be with their dog Sparky, and their grandchildren.

However Rev. Katsuya Kusunoki has been assigned to Seattle Betsuin to serve as resident minister, scheduled to arrive by mid-April. He comes from six generations of a temple family in Hiroshima, Japan, and has been serving Buddhist Church of Lodi, California, the past six years.  His rinban status had not been confirmed as of mid-March.

0
SHARES
Share
Posted Under: 2017, Sangha News, Spring
About the Author: Irene Shaba Goto
Irene Shaba Goto has been a member of Seattle Buddhist Church since 1988 and minister’s assistant since 2012. She received Tokudo ordination in 2014.  “I am grateful for Rinban’s wisdom and humility, that I am able to learn and grow in the Nembutsu,” she wrote. “Mrs. Kazuko Eidmann, widow of Phillipp Karl Eidmann, Rinban’s teacher, said it plainly on her visit to congratulate Reverend Castro, when she said, ‘Castro Sensei is a kind person.’ Namo Amida Butsu.”