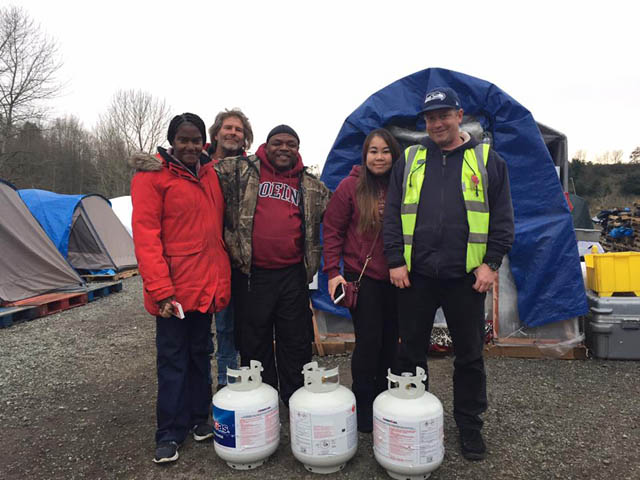 The camp’s communal tents are heated with propane and stay cozy even in inclement weather.
Photos by: Eric Davis, Damayonti Sengupta, Miki Tamura

Last summer Polly Trout made Seattle headlines by cutting the lock from a city-owned lot so Camp Second Chance, a self-governing homeless encampment, could move in. 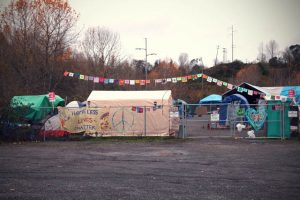 Camp Second Chance’s front gate can be seen from Myers Way, and is decorated with a banner made by Nalanda West.

Less than a year later the city has turned to Trout’s organization, Patacara Community Services, with a $208,000 contract to help with city’s homeless.

Trout founded Patacara Community Services, a Seattle non-profit that offers support to the homeless, including at Camp Second Chance. Her work is based largely on Buddhist principles.

Through the 2017 contract the city will fund a range of services to camp residents, including trash pick-up, water, case management, and social work. As part of the contract the camp population will increase from 25 to 60.

The contract will help more people access a safe and stable environment from which they can quickly transition out of homelessness and help others to do the same. The contract also requires Patacara to leverage the grant with privately raised donations.

“The first stage of our fundraising drive is complete, and we have what we need to move forward,” Trout said. “We are continuing to raise money for needs that are not covered by the city grant, like tiny houses to replace the tents.” 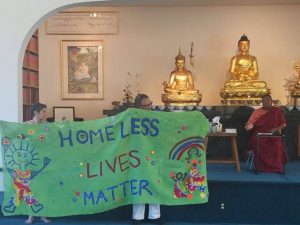 Polly’s root teacher is Venerable Pannavati, shown here at Nalanda West with a banner her retreat group made for the camp.

This city grant has been a big step, because until now Patacara was an all-volunteer organization with an annual budget of less than $30,000.

Trout takes inspiration from her Dharma practice, and particularly from the story of the nun Patacara, after whom her organization is named.

Patacara’s story is not unfamiliar to many of us in the modern world, especially those of us who have experienced or are experiencing poverty, sickness, abuse, grief, addiction and homelessness.

The historical Patacara was an affluent young woman who lost everything – her family, her home, her status – and was driven mad by grief. For years she aimlessly wandered the cities and the countryside of ancient India, hungry and ragged. In her wanderings, she eventually found her way to the Buddha as he taught at Jeta Grove.
“Those who had gathered to listen wanted to keep her away, but Gautama followed her and put himself in her path,” Trout writes. As Patacara encountered the Buddha, he said, ‘Sister, recover your presence of mind.’ Lucid mind returned to her, and under the Buddha’s care she began her long journey back to wholeness and beyond.” 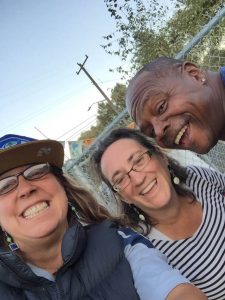 Denise and Susan of Love Wins Love made unity flags for the camp; they are in the background behind Site Coordinator Eric Davis.

Trout’s approach to service work reflects this story and her own practice of Dharma in action. Rather than simply setting out to save others from suffering, she seeks to support people and help guide them in their own path “back towards wholeness and beyond.”

“Our programs are open to people of all faiths, or no faith,” Trout said. “For board members, we don’t require that they self-identify as Buddhist, but we do ask that they believe that the Buddha’s teachings have wisdom to offer that is wholesome.

“For myself, my spiritual practice deeply informs the way I do service work, and the way I have set up Patacara,” Trout said. “Both on and off the cushion I continually return to the themes of impermanence, interdependence, compassion, kindness, dedication, simplicity, and humility. I try to serve the community in a way that is of benefit to beings, while simultaneously effacing my own ego.”

So many without homes

Seattle is experiencing an unprecedented housing crisis. A 2015 study reported that for every $100 increase in median rent homelessness increases by 15 percent, as prices across the region quickly spiral.

The City of Seattle has responded by creating a number of authorized encampments. Camp Second Chance is one of three new encampments the city authorized in 2017. It is the first major city-funded program for the homeless to be run by a Buddhist, faith-based nonprofit. 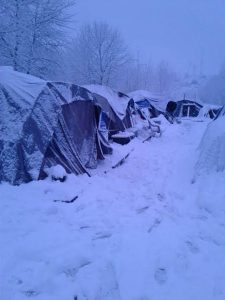 Many residents of previous encampments report that these programs have not provided them with the support they needed to access housing. Trout has been working for the past year to diversify the kinds of encampments that are available, so more constituents will have safe communities that align with their values and that meet their needs.

Rather than governing the camp from a predetermined set of rules and strictures, the organization assists residents of Camp Second Chance in their own democratic self-governance. This is a major leap of faith in the way issues of homelessness, poverty, addiction, mental illness and trauma are handled in our society.

Trout’s view is people living on the street know what they need to regain stability in their lives and how to get there, but lack the stability and support to do so. She sees her role as aiding in this process, providing material, emotional and institutional guidance, in a collaborative approach towards healing. 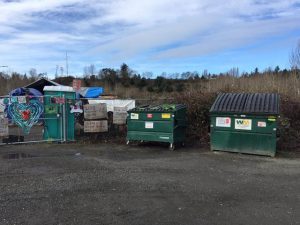 Thanks to the City of Seattle, Camp Second Chance now has dumpsters and waste management service.

Trout is not alone in the conviction that we must find new ways to address social ills. A growing number of organizations and movements are using this collaborative, bottom-up strategy. They are taking cues from those most harmed by, and marginalized by, the systems that harm them.

As we enter uncertain and dangerous times, whatever our faith or ideology, it is ever-more essential that we engage in our communities, and in our neighborhoods, cities, and suffering world, with a spirit that embodies the Dharma’s liberating balance of wisdom and compassion.

By empowering each other we become stronger as a Sangha and as a human family, Buddhist or otherwise.

For example after meeting the Buddha, Patacara went on to become one of his greatest disciples. In time she became an enlightened teacher in her own right, helping others to free themselves from suffering and helping to transmit the Dharma into the present day with her words. Upon her enlightenment Patacara is said to have written this poem:

Why can’t I find peace?
I’m virtuous
comply with the teacher
not lazy or puffed up

Later, taking my lamp
I enter my cell
sit on my bed and
watch the flame

I extinguish the wick
with a needle

The release of my mind
is like the quenching of the lamp
O the nirvana of the little lamp!”

It may be hard to see from our limited perspective, but the simple act of cutting chains from a gate may have tremendous consequences, for someone seeking to free themselves from chains of an entirely different kind.

313
SHARES
Share
Posted Under: 2017, Compassionate Action, Spring
About the Author: Reed Ingalls
Reed Ingalls is a Puget Sound-based writer, worker, student and social justice warrior. He has volunteered with Patacara and is one of the co-founders of the Seattle Neighborhood Action Coalition. He sits in the Rinzai Zen tradition, and seeks to bring a spirit of radical activism to his Dharma practice, and radical dharma to his activism practice. His phone is 425.590.7035, email reed.ingalls@gmail.com.