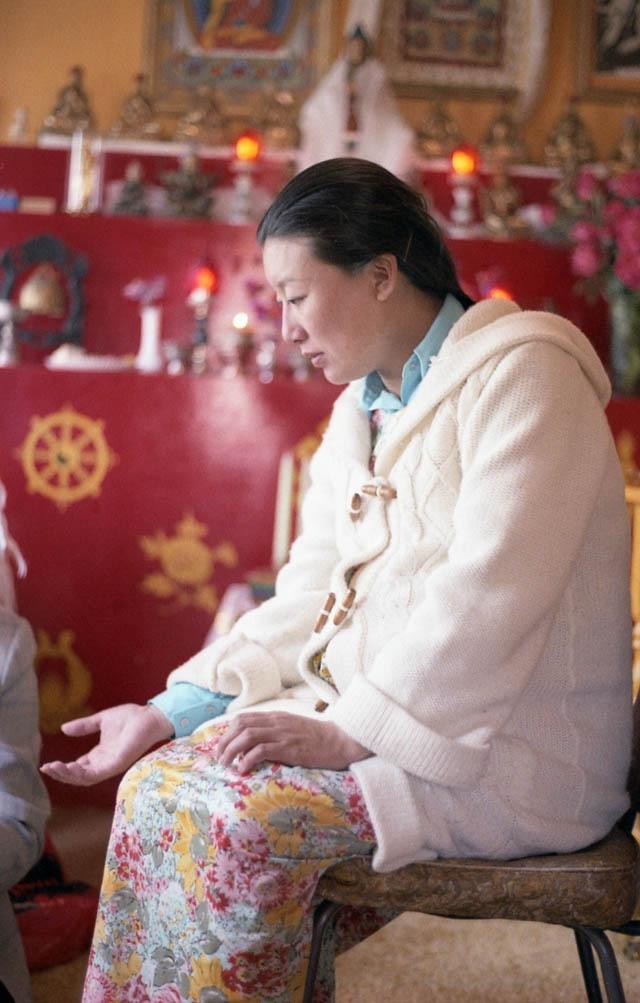 His Holiness Jigdal Dagchen Sakya, and his wife Her Eminence Jamyang Dagmo Kusho (Dagmola) Sakya, married Mariam and me in Seattle on Nov. 26, 1977. Their ceremony not only marked the beginning of our marriage but also the start of the Phuntsho Collection, a nearly 40-year collection of photographs taken of Rinpoche, Dagmola, the Sakya family, our Sangha and Tibetan Buddhism in the Pacific Northwest.

The collection was named after the first part of the Dharma name given me by Dagchen and Dezhung Rinpoches. Last year I uploaded 29 albums of the collection to Flickr.com to help celebrate Tibet Fest and to help mark the recent passings of Dagchen Rinpoche, Ani Chime, Dhongthog Rinpoche and his wife, Tsewang. 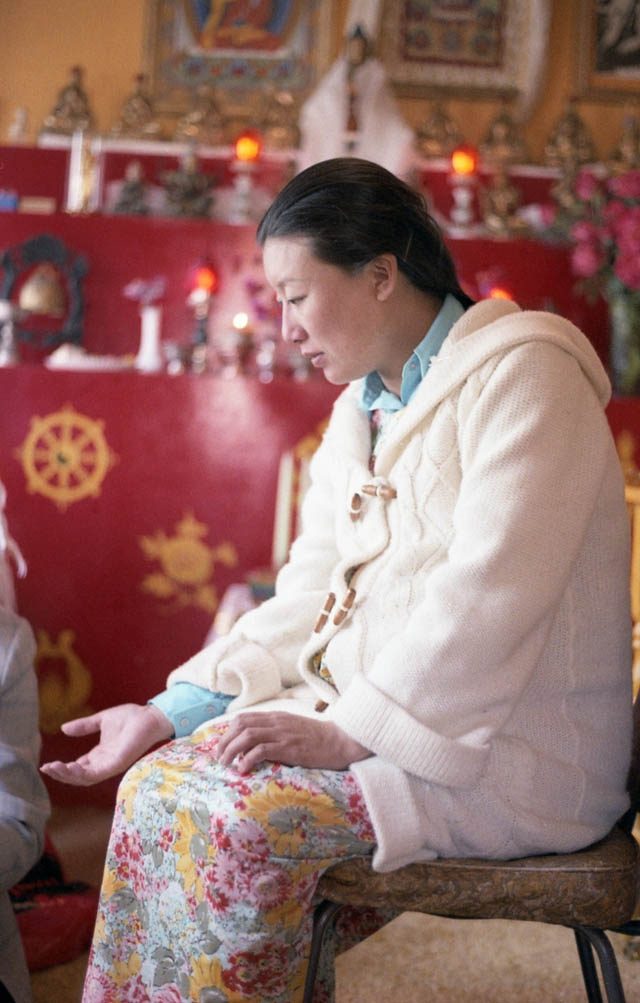 An accidental photograph that embodies many precious symbols. Tsering Yuthok, daughter of Tibet’s last prime minister, carries her first-born Topgyal, during Sakya Tegchen Chöling’s celebration of His Holiness Tenzin Gyatso the 14th Dalai Lama’s birthday. A faithful Tibetan mother soon to give birth with a Dharmachakra rising from her outstretched hand and Buddha rising from her mind. 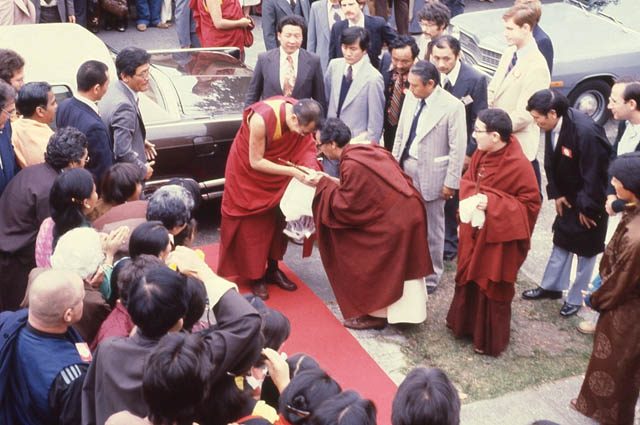 The sequence begins with Rinpoche showing our eldest daughter, Phuntsho Wangmo (Frieda), how to paint one of Sakya Monastery’s walls. At first Frieda is afraid and doesn’t want any part of it, but with Rinpoche’s gentle help and encouragement, Frieda discovers that she can and likes doing it. 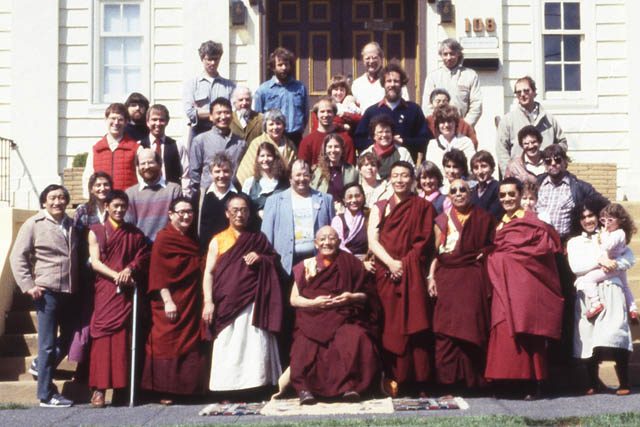 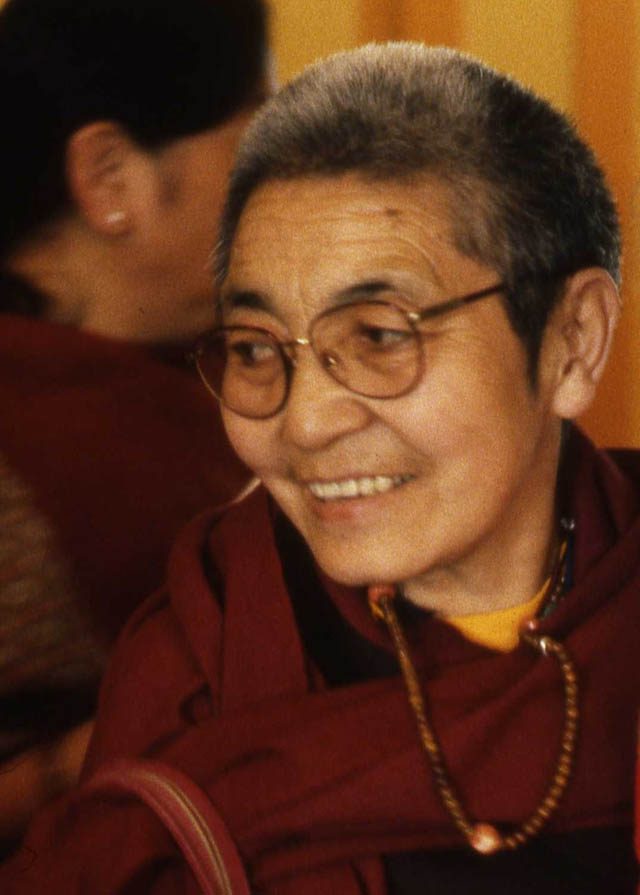 Ani Chime was a simple nun, Dagmola’s aunt and His Eminence Dezhung Rinpoche’s and Dr. Nyima’s sister.  The power of Ani Chime’s faith, humility and selflessness was so strong, pure and self-evident that she would inevitably awaken and fortify the courage and devotion of those privileged to be in her presence.  Young children were instinctively drawn to her, and many of us found renewed hope in her loving kindness, courage and boundless faith in the three jewels. 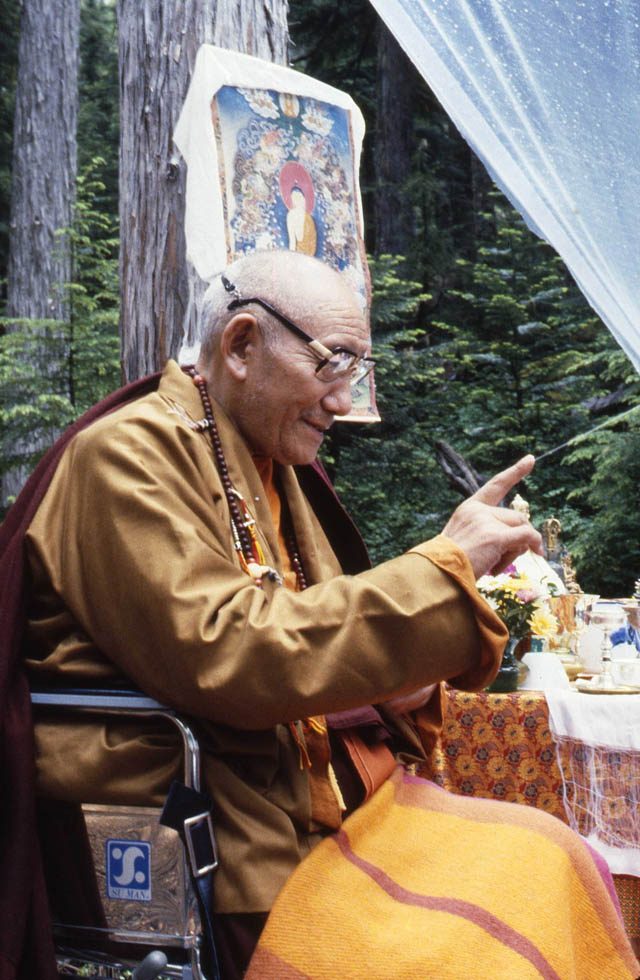 According to David Jackson’s book “A Saint in Seattle,” Ani Chime rescued her very learned, highly realized and widely revered older brother, His Eminence Dezhung Rinpoche, from the Communist Chinese soon after fighting broke out in East Tibet. Her account of their escape from Tibet is even more awe-inspiring.

Ani Chime was normally very quiet and didn’t say much, but one morning while sitting alone with her and Dagchen Rinpoche in Rinpoche’s kitchen, she recounted their escape.

Dezhung Rinpoche was tall and stood out, but unlike many monks and nuns trying to escape the violent onslaught, Rinpoche never took off his robes. Whenever he traveled he wore a reliquary to keep anything from penetrating his skin, given to him by his lama, the highly-realized Lama Legpa Rinpoche.

Dezhung Rinpoche never discouraged anyone from seeking his protection and his followers grew sizable in number. By listening to two crows who flew overhead, Rinpoche was usually able to direct his group away from the search parties determined to find and kill them. Eventually the Chinese got wise, took off their uniforms, and dressed up like Tibetans to sneak into Rinpoche’s camp unnoticed.

Once in they surrounded Rinpoche, pulled out their guns and started firing. Ani Chime saw several bullets make the hair on his head jump, and when he untied his belt many bullets fell to the ground. At that moment Dagchen Rinpoche concluded the precious teaching with the words, “That’s faith.” 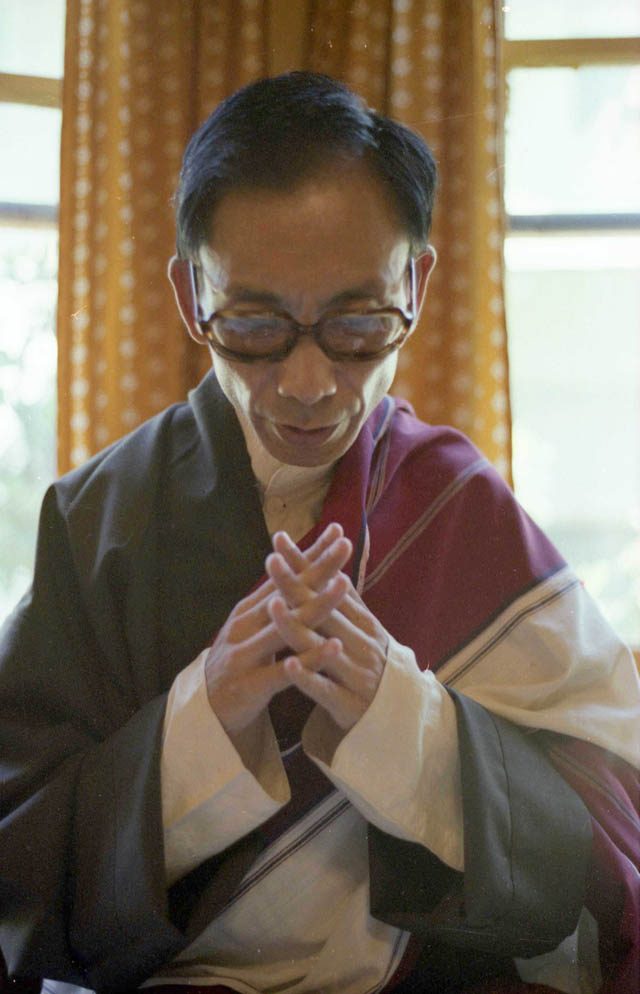 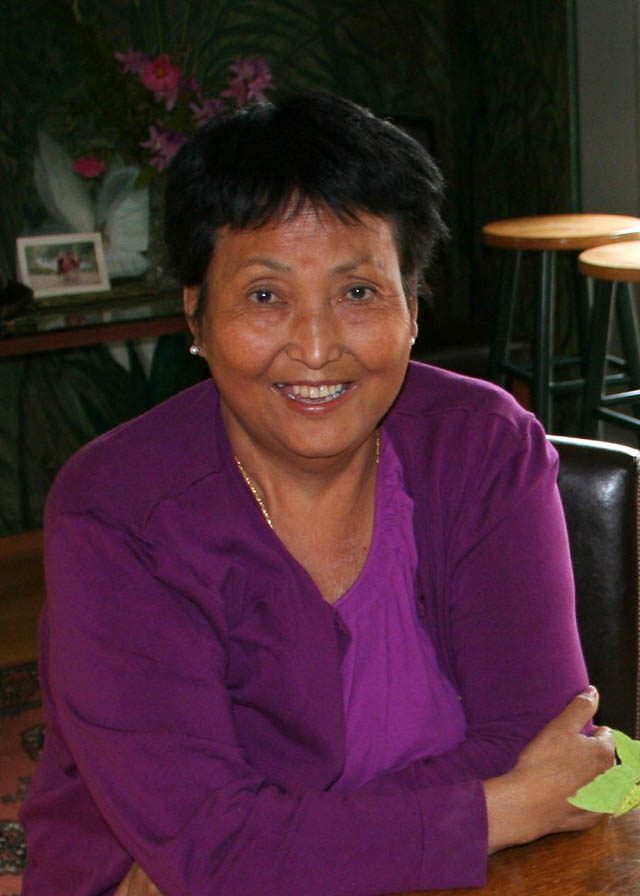 Tsewang Dhongthog, Rinpoche’s wife and their family’s mother and grandmother-2014

Venerable T. G. Dhongthog Rinpoche, one of the most respected Tibetan Buddhist scholars of his time, was chosen by Dagchen Rinpoche to help teach his five sons and to grow Tibetan Buddhism in The United States. As an historian, lexicographer, calligrapher and astrologer, Dhongthog Rinpoche was an exceptionally learned and prolific author who was trusted to convey the complete and detailed meaning of many ancient and sacred texts.

Tsewang was his loving wife and working mother for their three children and servant monk, grandmother to their two grandchildren, and a regular Tibetan resettlement volunteer. Before leaving Tibet in 1957, Rinpoche was head lama of Dhongthog Rigdrol Phuntsog Ling Monastery in Kardze. 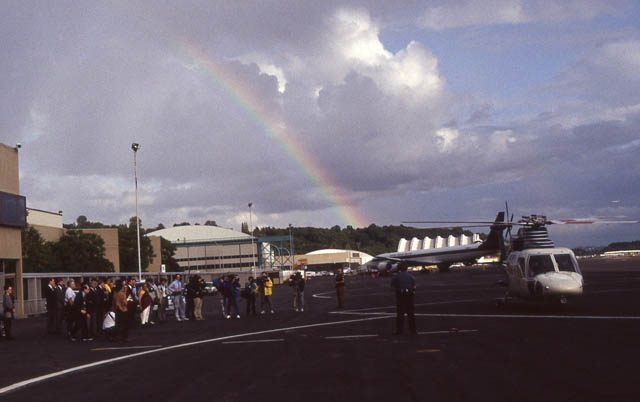 My camera was in the shop for repairs so Dagchen Rinpoche lent me his and told me not to shoot too much “But if you see something special, shoot it.”  The next morning a double rainbow greeted our motorcade as we turned onto Boeing Field. The Dalai Lama’s helijet from Victoria was late and the heavenly sight merged into a single rainbow that lasted for nearly half an hour.

Since the local news media either didn’t understand or pretended to ignore its significance, all turned their backs to it and this was probably the only photograph taken of the spectacle. I sent a copy to His Holiness and his personal secretary responded with a short thank-you note. When I placed it on our altar, a small rainbow appeared on the envelope. 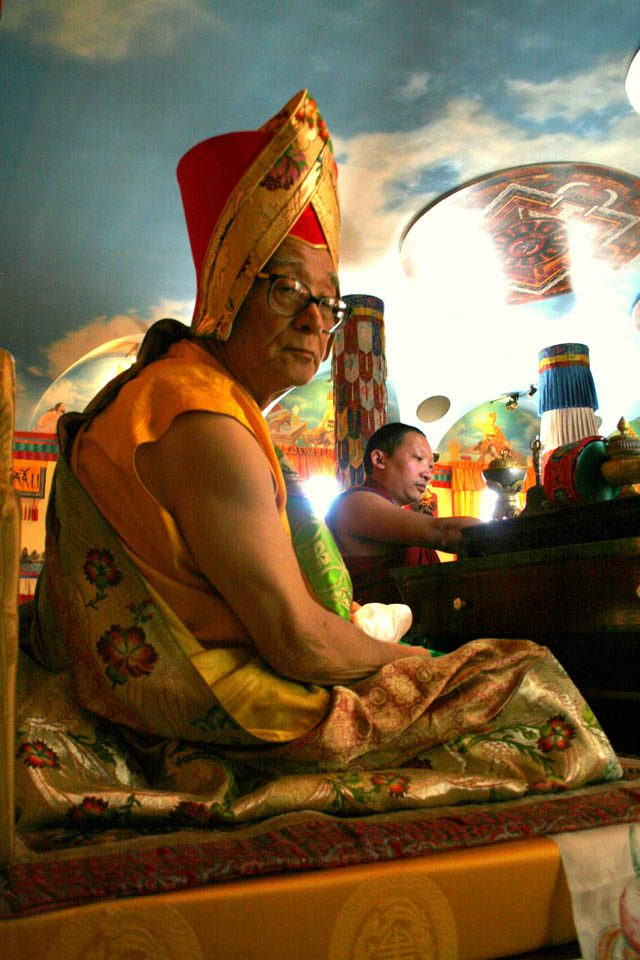 The former Kalu Rinpoche, who was in his eighties and beloved and revered throughout much of the world as one of the Kagyü lineage’s most accomplished and realized lamas, gave a public teaching downstairs at Seattle’s Sakya Monastery of Tibetan Buddhism for a couple hundred people in 1985. During the question-and-answer period that followed, there were many questions about Chögyam Trungpa Rinpoche, the Oxford-educated Tibetan tulku, terton, meditation master, and fellow Kagyü, whose lucid writings and important gatherings and teachings introduced much of the West to Tibetan Buddhism. At one point, Kalu Rinpoche became a bit disturbed by the line of questioning and spoke accordingly.

Kalu Rinpoche said Chögyam Trungpa Rinpoche (who died in 1987) was indeed a very high lama who has greatly benefited many Westerners. Kalu Rinpoche added that it should also be understood that just as most Tibetans consider His Holiness The Dalai Lama Tibet’s highest lama, both temporally and spiritually, they also consider His Holiness Jigdal Dagchen Sakya their second-highest lama.

I had heard this before from some Sakyas and thought it might be sectarian bias. Coming from such a highly venerated Kagyü lama made the revelation far more profound.

As an American who didn’t travel with Rinpoche on any of his pilgrimages to Tibet, India, Nepal and Bhutan and had never seen him in the eyes of his many followers there, Kalu Rinpoche’s revelation awakened a much-clearer understanding and appreciation. I knew Dagchen Rinpoche was considered a high lama by the deference shown by all of the many other high and often older lamas who visited, but I had never fully accepted and thought of him before as Tibet’s second highest.

Fulfilling part of Padmasambhava’s eighth-century prophesy, Dagchen Rinpoche, senior lineage holder of the sacred Khön family lineage, in 1960 led his family of very high Tibetan lamas to be among the first to emigrate.

They all became U.S. citizens. Dagchen Rinpoche, his younger brother His Holiness Trinley Sakyapa and his wife, Her Eminence Jamyang Dagmo Kusho Sakya, and his wife’s uncle His Eminence Dezhung Rinpoche, together founded Seattle’s Sakya Monastery, one of the nation’s first monasteries of Tibetan Buddhism.

Now for causes beyond our imaginings Rinpoche was here with us … young and old, rich and poor, strong and weak, fast and slow, wise and foolish … offering all an opportunity to join him and travel through our lives with him and his ancient family’s holy teachings.

The small, inclusive and slowly-growing size of his following in the West, helped Rinpoche establish a secure and broad-based foundation from which to grow the study and practice of Tibetan Buddhism. Being less famous in the West gave him more time for us. Throughout Sakya Monastery’s construction he was usually in the middle of it, guiding us along and actually doing much of the most difficult, dangerous and demanding work and making it fun, safe and interesting for anyone who wanted to help.

He was also a demanding taskmaster, who sometimes staged tasks to test students and teach lessons, as much as to complete tasks.

And, just as Manjushri’s sword flames bright, Rinpoche also relished the many opportunities we gave him to poke, reveal and help us dissolve our many doubts and self delusions obstructing the deepening of our trust, faith and understanding. He became our profoundly wise but never-distant luminary, our refuge, trusted teacher and beloved guide.

To commemorate the first anniversary of His Holiness Jigdal Dagchen Sakya~Dorje Chang’s passing, and to give us all an opportunity to share an afternoon and evening together enjoying what could become Rinpoche’s Park, Mariam and I plan to host a pot luck open house, noon to midnight at 16202 – 72nd Avenue West, Edmonds, Washington 98026 on Saturday, April 29.  Email your name c/o Rinpoche’s Park to plehn@lehndesign.com and I’ll send you an update on our progress and plans.