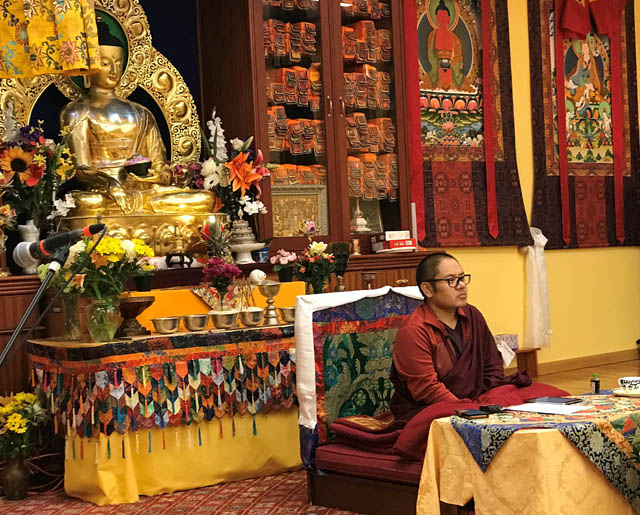 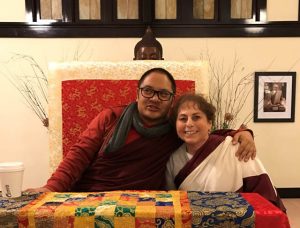 Adzom Gyalse Rinpoche, from Shechen Monastery, Nepal, is known for his teachings on Longchen Rabjam, commonly known as Longchenpa. A legendary master of Tibetan Buddhism, Longchenpa taught the cycles of Dzogpa Chepo, also known as dzogchen, the great perfection. Longchenpa lived from 1308 to 1363.

Adzom Gyalse Rinpoche gave the teachings at the Northwest Tibetan Cultural Association, and at Portland Friends of the Dhamma. The visit was organized by members of Samden Ling of Portland.

Rinpoche began with teachings from “Kindly Bent to Ease Us,” translated by Herbert Guenther, and H.H. the Dalai Lama’s “Mind in Comfort and Ease.” 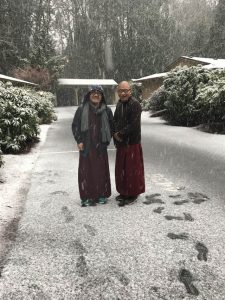 Rinpoche and translator Tashi enjoy the snow in front of Mandell’s Portland home.

Rinpoche started with instructions for finding the best natural environments for meditation. Each location supports spiritual practice, whether forest, mountain peak or island, he said.

“As he progressed in the teaching, I realized how very timely this teaching was for me,” said attendee Jeanne Enders. “Just that day I’d looked at my cushion and its surroundings and thought how I would like to reconsider the setting.

“The most essential takeaway for me was the importance of nature as a possible envelope.  He discussed sitting on river banks, on high mountains and those times where mediating in a cave has benefits,” she said. “The salient point for me was the value of considering varieties of places and time as opportunities for mediation.  I left feeling newly inspired to consider external conditions, and to appreciate the value of such conditions for my practice.”

Rinpoche identified three attitudes necessary for practitioners to establish a good practice. The first is faith in authentic practice. Faith allows for blessings to pour in, he said. Faith opens the way to meditation development and is an antidote to procrastination.

The second is renunciation of samsara, the illusion of solidity in the cycle of countless births and deaths. Renunciation sets in motion disenchantment with grasping things as if they are permanent, when in fact they are bound to change. The renunciate mind creates the ground for opening the door to the path of liberation. 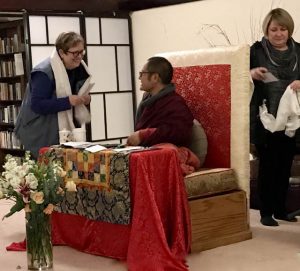 Margaret Cormier making offerings to Adzom Gyalse Rinpoche, with Karen Kolodziejski in the background ready to make an offering to Tashi.

The third, the aspiration for freedom from samsara, leads to liberation and enlightenment.

“It was a great blessing to have the chance to be in the presence of Rinpoche.  His clear light, humility, earnestness and goodwill permeated the spaces,” said student Kelly Mackin. “One can feel the Dharma’s perfect expression through him.  His focus on the basics of practice is a perfect counter to the tendency to let the ego fabricate and execute its detrimental structures and patterns.”

Student Christoper Dalton also was impressed by Rinpoche’s teachings, and by who he is.

“After spending some time with Adzom Gyalse Rinpoche and receiving teachings from him, I feel tremendous gratitude for his example of humility, kindness and wisdom,” Dalton said. “I feel like I’ve been cradled by the Longchen Nyingtik Lineage which Rinpoche represents, only to be reminded more than ever of the devotion I feel toward the lineage.”

Although Rinpoche speaks English he preferred to speak in Tibetan, so he could fully focus on the teachings without also trying to speak a language foreign to him. Lopon Tashi, from Shechen Monastery, Mexico,  doubled as Rinpoche’s translator and his attendant.

“How lucky for Portland that Adzom Gyalse Rinpoche and his wonderful translator, Tashi, came and offered these treasures,” said Betsy Toll. “They conveyed the depth and substance of the teachings with such clarity and simplicity, making them accessible and meaningful even for those not closely familiar with this lineage.”

Hosting a visiting Dharma teacher for the first time is similar to bringing home a new friend to meet friends and family. While preliminary emails set travel arrangements, many questions could only be answered in person.

Hosting teachers so they feel comfortable is always a goal. That can mean determining a teacher’s food preferences and how much time alone they need, which can be difficult when teachers downplay their needs. 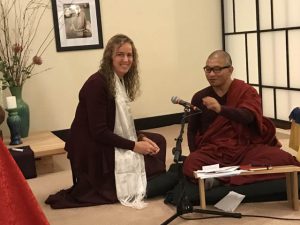 Before Rinpoche arrived, all we knew was that he’s vegetarian, and would be teaching from an important Longchenpa text. We soon found out he likes tea and coffee.

Standard questions concerning the timeline and design of the teaching evenings were important. How long would he like his teaching sessions to be? Would he talk to us in English or always use a translator?

Simultaneous planning the retreat included getting acquainted with this new teacher, his teachings and texts, as well as getting appropriate prayers printed.

To make Rinpoche and Tashi feel at home, resident teacher Jacqueline Mandell offered her house and moved over to her daughter’s place. 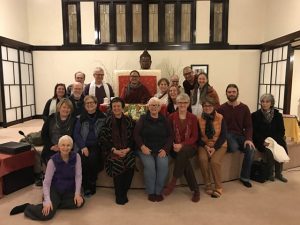 We offered participants opportunities to host meals for Rinpoche and Lopon Tashi, and to take them sightseeing. This proved enjoyable, and groups of practitioners offered breakfast, lunch or dinner to both, and escorted them to places including Multnomah Falls and the Lan Su Classical Chinese Garden.

“I feel very fortunate to have helped prepare breakfast for Rinpoche and Tashi one morning,” said Stephen Raskin. “I was struck by Rinpoche’s openness and warm presence, and by the pure, uncomplicated delight he expressed when he stepped out into the snow for the first time since he was a boy in Bhutan.”

Rinpoche and Tashi found their own way to a hike in Forest Park, and enjoyed other aspects of Portland’s nearby nature. The two also took private quiet time, usually in the early mornings and late evenings.

“During one of his evening talks, Adzom Gyalse Rinpoche reminded us to be mindful regarding the foods we offer our teachers. Those offerings directly affect the health and well-being of our precious teachers,” said Mimi Maduro, Karen Fong and Carolyn McKnight in a statement. “When we had lunch with Rinpoche, we were able to thank him for raising this important issue. It was a delight to share a Japanese meal, followed by a visit to the Chinese Garden.”

Learning about Adzom Gyalse Rinpoche’s life also helped us get to know him. Rinpoche is a tulku, a recognized reincarnation, who was discovered by the late master Dilgo Kyentse Rinpoche in Bhutan.

In his prior life Adzom Gyalse Rinpoche was a “terton,” which means someone who reveals terma texts.

Rinpoche started life herding yaks for his family in Bhutan. But after age 5 he moved to Nepal for his Buddhist training at Shechen Monastery.

After the nearly week-long visit, we all got to know one another in an organic way. Samden Ling enthusiastically invited Adzom Gyalse Rinpoche back to Oregon for a five-day residential retreat in early autumn 2017, to continue the expansive teachings of Longchen Rabjam.

Rinpoche recognized the sincere practitioners of Samden Ling, and accepted the invitation.

“The fundamental experience for me was one of relaxation, to “let go” of the experience of contrived mental pressures and emotions,” Mandell said. “My memory of his presence is a constant example of ‘where to return to,’ to the basis of accomplishment.  The feeling is one of profound gratitude.”

0
SHARES
Share
Posted Under: 2017, Dharma Education, Spring
About the Author: Jacqueline Mandell
Jacqueline Mandell is the resident teacher  at Samden Ling. She has trained in the three major Buddhist traditions: Theravada, Mahayana and Vajrayana. Her connection to the Longchen Nyingthig lineage seemed to happen by coincidence when she was traveling in Tibet. She met teachers of the Longchen Nyingthig long before she began the rich practices of the lineage.