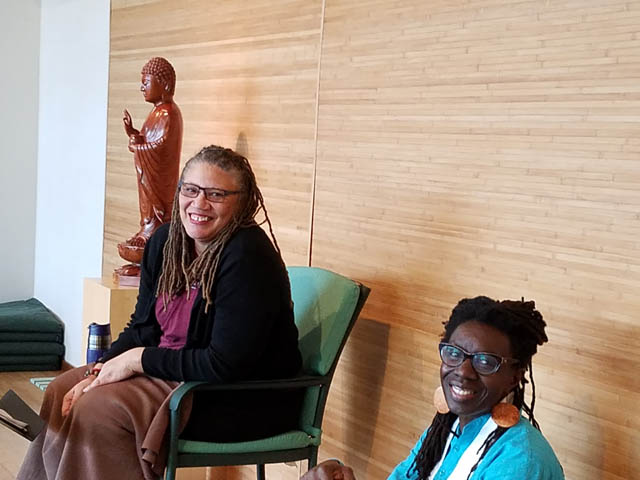 In January I had the privilege of attending a two-day Seattle non-residential retreat, led by two Black women whom I consider friends and mentors. 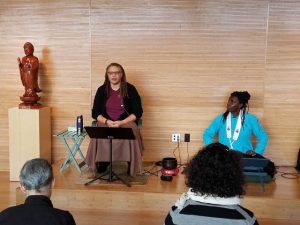 Tuere Sala teaching during the retreat.

Vimalasara Mason-John became a friend when I practiced in the Triratna lineage, in north Seattle. She is chairperson of Triratna Vancouver Buddhist Center, and a leading teacher on Buddhist approaches to recovery from addiction.

Tuere Sala is co-guiding teacher at Seattle Insight Meditation Society. I know her from the People of Color affinity group I currently sit with at Mindfulness Community of Puget Sound, which is in the lineage of Thich Nhat Hanh (Zen Mahayana lineage).

These two teachers are part of my Sangha family.  Thich Nhat Hanh teaches that the Sangha is the next Buddha.

On Friday night we learned about the life and accomplishments of Dr. Bhimrao Ramji Ambedkar. Ambedkar’s legacy is one of a social-political reformer who converted to Buddhism, and whose conversion of many non-caste people to Buddhism has had a large impact on modern India.

Ambedkar’s mantra was said to be “educate, organize and agitate.”   If you haven’t heard of Ambedkar I suggest you read a bit about him, his commitment to fighting structural injustice, and his conversion to Buddhism as a path to liberation.

On Saturday we began to explore the four tetrads of the Anapanasati Sutta (The Sutta on the Full Awareness of Breathing) and the following questions:

When did you stop dancing?

When did you stop being enchanted by your stories?

When did you stop dwelling in the sweet territory of silence?

We explored our answers to these questions in the context of identity and our personal stories in vulnerable dyads.  My partner asked quietly and persistently: When did you stop signing?

I didn’t stop singing – you just don’t know my song.

OK – Maybe that one time after they called me a nigger because I was faster and stole the soccer ball then scored.

When I was put on academic probation for swearing in a college essay.

When did stop singing?

When she kept telling me I was tone deaf.

Who knew I would share so honestly with a stranger, and then have the chance to practice with my answers using the Full Awareness of Breathing Practice. 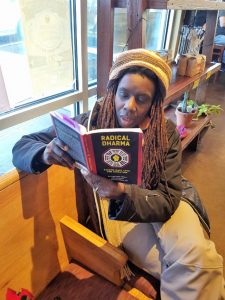 This is a long breath/This is a short breath

Tuere and Vimalasara shared their different perspectives on the intersection of Black identity in the context of the Dharma.  It was useful for me to hear their varied perspectives, as it allowed me to re-examine my own experience in Buddhist communities, from my life lived in this Black body. 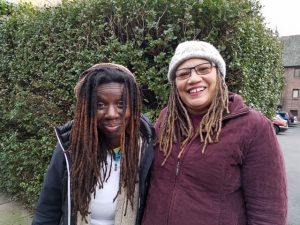 Being able to support Vimalasara and Tuere while attending this retreat was a true gift.  It was joyous to be sitting in a retreat led by two Black women, both of whom I know and admire.

To hear the Dharma from teachers who are familiar with my lived experience of a black woman in the dominant culture of North America is a rarity.  I can trust that when Tuere says fear, that she understands my gut-wrenching anxiety and fear of police during the months after Alton Sterling and Philando Castile were killed by police.

When Vimalasara says that she is working with anger, I trust that it is the energy of anger that filters through the Black body and DNA, and takes into account the traces of ancestral wounding still alive and present. 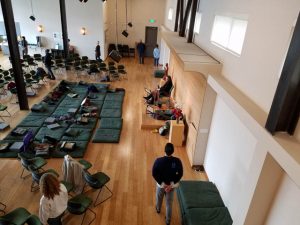 A view from above, at Seattle Insight Meditation Society.

I know that there are those who yearn for Sanghas that are color blind, especially in uncertain times. Please know that seeing two Black faces in teaching and leadership roles all weekend long was liberating, and that my commitment to spaces where people of color feel welcome is strengthened.

The Buddha, the Dharma and the Sangha have much to offer my brothers and sisters, and I yearn to have it available to all of us.  The seeds of inner liberation through my Black identity were watered during this weekend, as were my belief that inner liberation and outer transformation are inextricably linked. 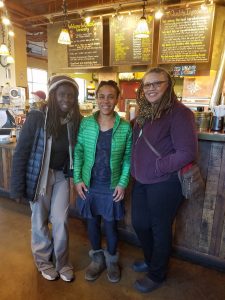 If as my teacher says the Sangha is the next Buddha, then what must we let go of so that we can all experience our breath, our song, dance, be enchanted by our stories, and dwell in the sweet territory of silence together/apart and internally and externally?

0
SHARES
Share
Posted Under: 2017, Compassionate Action, Spring
About the Author: Genevieve Hicks
Genevieve Hicks considers herself a Christian Buddhist Yogi who practices in the tradition of Thich Naht Hanh at the Mindfulness Community of Puget Sound (MCPS) in Seattle. In addition to being an active member of the MCPS Seattle Sangha, she helps organize Buddhist-related people of color events at her Sangha and elsewhere.  She also organizes and teaches yoga for people of color healing classes in Seattle as well as meditation classes. When she is not working as a physical therapist or practicing with one of her Sanghas, she can be found climbing, hiking or moving her body in the great outdoors.