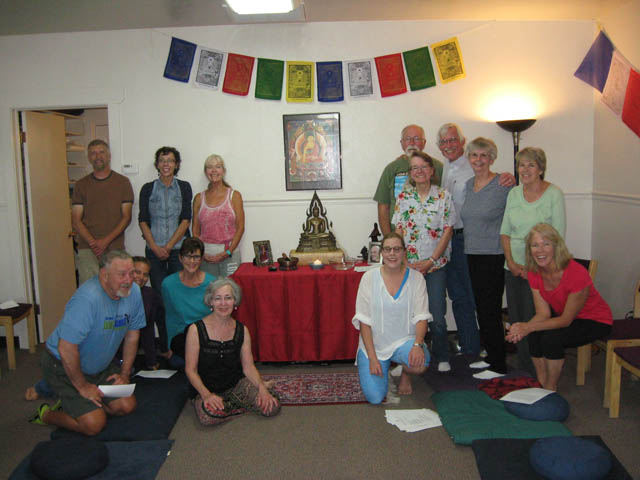 The Portneuf Sangha Meditation Center has  been growing since moving to a larger space last summer, reflecting increasing regional interest in meditation even among people who don’t consider themselves Buddhist.

The new storefront space is in Pocatello’s historic North Building, built in 1916 and listed in the Idaho State Historical Society registry. 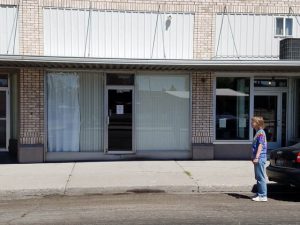 With unlimited access to our new space we now host expanded group meditations including noon on Tuesday, Wednesday, and Thursday; a Wednesday evening sit, and 10 a.m. sits every Sunday.

We also have started offering half-day retreats when a fifth Sunday occurs in a month.  In these retreats, led by Tony and Paula Seikel, we alternate sitting, walking, eating and loving kindness practices, and end in a council circle.  We plan to offer full-day retreats as well.

The new building also gives people more access to our large lending library of books related to Buddhism and meditation.

Large windows looking out on a downtown street give us more exposure to people walking by.  We also offer ample free parking.

The Portneuf Sangha now has a contact list of over 200 people, although typically a core of about 30 members attend events.   The essence of all Sangha activities is mindfulness meditation practice, in the vipassana tradition.

In 2015 we applied for and were granted nonprofit status.  This brought the benefits of better financial stability, allowing us to pay the higher rent at our new location. It also brought more credibility within the community.

Nonprofit status also forced our rather casually run organization to become more formal, with a board of directors, tax reports, annual meetings, and bylaws.  We are still finding our way, as we enter this new phase of existence as a nonprofit religious group. 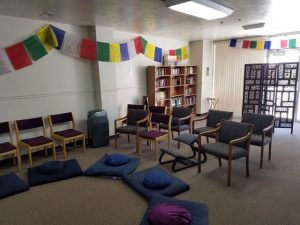 The Sangha has a diverse set of books, videos, and audios for checkout, as well as a number of free books.

Offering diversity in a conservative region

A challenge for our Sangha  has been to grow within the conservative political and religious atmosphere of Idaho, a  state where people have limited experience with non-Christian religions. The dominant religion here is the Church of Jesus Christ of the Latter Day Saints, also known as LDS or Mormon.

The Portneuf Sangha Meditation Center is a member of the Portneuf Valley Interfaith Fellowship, an organization of representatives from most faiths in Pocatello.   Being members of this group reflects the Portneuf Sangha’s philosophy of openness to all religions and faiths. It has allowed us to support religious groups undergoing persecution in the region and nation, such as the Islamic and Baha’i  faiths.  Participation in this group also lets the community know more about Buddhism. 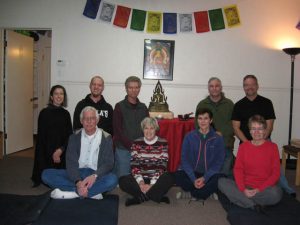 People together at a recent Wednesday evening meditation in the new space.

We keep our group open to people of all faiths, and to those not affiliated, with the understanding that there are innumerable paths to the end of suffering. We offer an opportunity to explore the path of Buddhist teachings, without judgment.

Those who attend the Sangha programs are quite diverse in age, gender, faith, and occupation.  They include people from all economic strata and professions, including health care workers, railroad engineers, business owners, mental health workers, college professors, and students.  Quite a few people attending are Mormons, Catholics, Unitarians and members of other faiths, who attend our meetings for the meditation and fellowship.

Although the Portneuf Sangha does not promote a specific political stance, many of our members also work for social justice within the philosophy of Buddhism.  We serve as a refuge and place for people to talk openly about the struggles we encounter in this work.

People guide us from our original vision

Since the founding members were students of John Travis, a California-based vipassana meditation teacher who leads the Mountain Stream Meditation Center in California, we asked him to guide us in developing the Sangha.

Travis advised us to envision what we wanted, and to allow the group to grow from this vision.  He predicted that people who shared our vision would come and stay, and those who wanted something different would find it elsewhere. 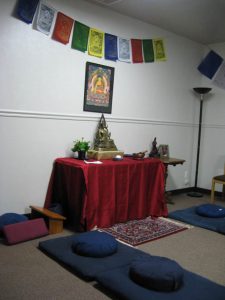 We decided we wanted to include all, but still center on the meditations, precepts and practices of Buddhism.

As the group has grown we have responded to the interests of members.

In 2013 we added a monthly Sunday lecture by Bill Haines, a local Buddhist scholar.  These well-attended meetings offered information about the life and teachings of the Buddha in the context of world history.

Haines continued offering these lectures until the fall of 2016, when he left the Portneuf Sangha to start his own group, based on a somewhat different philosophy.

After Haines left we surveyed the members to identify elements of the meetings they most wanted to continue.  Meditation, discussion, and interactive communication emerged as the most important components, and members said they wanted to meet every Sunday for meditation.

We now include chanting on the first and third Sunday meetings.  All Sunday meetings begin with a 30-minute silent meditation, and include time for refreshments and for people to catch up with each other.

Recently several members led by Tess Greenup and Evelyn Dyck began a weekly group to study Marshall Rosenberg’s Nonviolent Communication program.   We foresee this expanding to a community-wide offering in the future.

Last year Haines, Wayne McCabe, and Bob Gehrke began a Refuge Recovery group based on Noah Levine’s approach, offering it in our Sangha and also at a local recovery resource center.  Although we no longer host the meetings in our Sangha, we support continuing this valuable program in the community.

We have sponsored a few retreats over the years, primarily one-day events due to  area’s lack of facilities for residential retreats. These have included retreats offered by visiting teachers  Marcia Craighead, Nancy Taylor,  and  Anam Thubten.

The Portneuf Sangha was organized in late 2005 by Kristin Fletcher, Tony Seikel, and Paula Seikel.  Kristin and Tony had met at a retreat led by teacher John Travis, and wanted to find other people in our region interested in meditation and Buddhism. 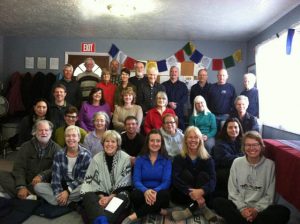 The sangha after a Sunday meditation in our old space, before the move.

From the start we envisioned a place where different approaches to meditation and Buddhism could be learned and discussed in a welcoming and informal atmosphere.  We put an ad in the newspaper announcing the beginning of this new group, and were shocked when more than 20 people attended.  One of these people was Tess Greenup, who became one of the founding members.

We started meeting Wednesday evenings in an Idaho State University classroom, for a 30-minute meditation session.  Members brought meditation cushions with them for each meeting, and we had to clear the room quickly to let the next class in.

After about 18 months we moved to a small room in a building shared by several therapists. We remained there for 10 years, until growth led us to start looking for a larger space where we could offer expanded programs to the community.

We have been teaching meditation classes in the community since 2005, and we also teach classes at the university through the Division of Health Sciences.

In 2008 we began offering a video of a meditation teacher or related topic on the second Sunday of each month. The videos have catalyzed discussions about navigating the world using the light of the teachings.  We also set aside time for social interaction, so members get to know and care about each other.

9
SHARES
Share
Posted Under: 2017, Sangha News, Spring
About the Author: Paula and Tony Seikel
Paula and Tony Seikel are the organizers of the Portneuf Sangha, and practice mindfulness meditation in the Vipassana tradition.  We are both retired from Idaho State University.