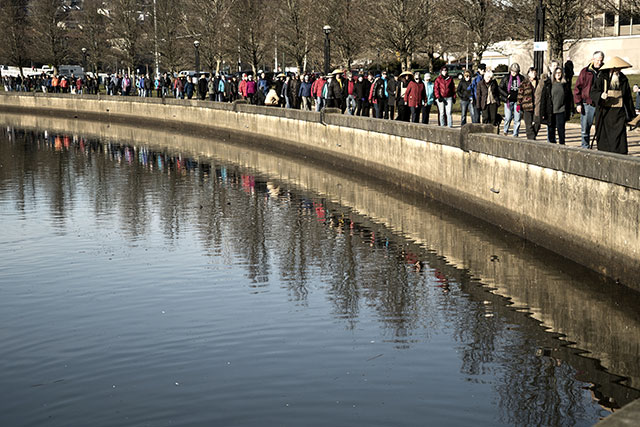 Nearly 100 people walked together in silence in Olympia, Wash. on Jan. 15, circling Capitol Lake as they recognized the birthday of Dr. Martin Luther King Jr.

Members of Buddhist sanghas and others gathered near the state capitol for the 10th annual Silent Meditation Peace Walk. The noon-hour walk, the same day and time every year, honors peacemaker King Jr and the principles he stood for. 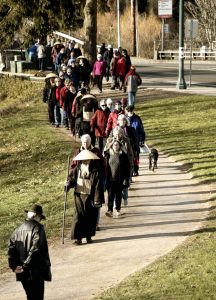 Seventy five people started out but the number steadily increased to nearly 100, as people around the lake joined as the procession passed them.  Patches of snow remained as the walkers drifted along bundled up for the cold, their breath clearly visible even from a distance.

Every year the Silent Walk has attracted more than 50 people, once attracting more than 100. Regular attendees arrive at Marathon Park well before noon, and are joined by people who brave the cold to walk in honor of King and his principles of peace and non-violence.

Venerable Nhat Hanh teaches that to truly actualize peace we must mindfully include the thought of peace in our every action. His book “Peace in Every Step” is based on this premise. 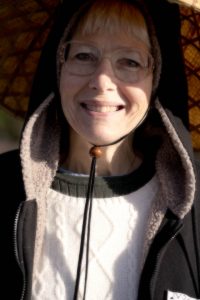 In 1967 Dr. King nominated Thich Nhat Hanh for the Nobel Peace Prize, for the latter’s unremitting dedication toward peace and non-violence. Since that time Thich Nhat Hanh has become one of the most beloved Buddhists teachers in the world, offering peaceful practices to transform modern society and to benefit people of all cultures and faiths.

This annual Silent Walk was originally conceived as part of a community-wide celebration of King’s vision, in response to 2007 troop surge in Iraq.

The South Sound chapter of the Buddhist Peace Fellowship introduced the Silent Peace Walk to honor King and the principles he shares with Buddhist tradition.

Fundamental to the spirit of this walk is that it only promotes peace, without political references or negative connotations. Participants are encouraged to generate goodwill in their hearts and wish the same for others.

Walking in silence was initially introduced as a meditative practice during the walk. People are asked to maintain silence as a condition of joining the walk, to support a non-political environment conducive to generating thoughts and intentions of peace. Walkers also are asked not to express negative thoughts or feelings regarding current events, to ensure everyone feels safe throughout the walk.

All presentations before and after the walk, include offerings by members of the public, are expressed and maintained in this light. The hour-long walk generally ends with a group discussion, and the promise of continuing the annual tradition. 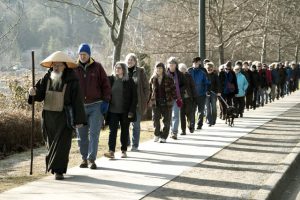 People begin the walk in silence, in the crisp air of Olympia.

Both began the walk with words of encouragement and instructions on walking meditation. Miles led the walk, clad in a black Buddhist robe and carrying a wooden staff.

The walk has long been included as part of Open Gate Zendo’s annual winter retreat. The sesshin entitled “Gathering of the Heart,” was scheduled to coincide with the Martin Luther King Jr holiday weekend. 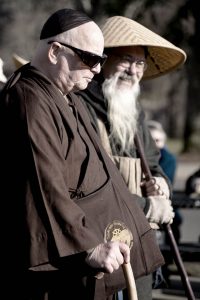 The Buddhist presence is delightfully encouraged and visibly supported by these teachers, who all dress in Buddhist robes and wear the traditional gear of traveling monks.

This year’s walk marked a decade of dedication, by all who made an annual pilgrimage in honor of King, Thich Nhat Hanh, and the principles of peace these men represent.  Those who brave the wet and cold to spend an hour in silent reflection and dwelling, are rewarded by the peace this practice brings into their lives.

It is our hope that this peace and this tradition will only continue to grow, and that more and more people will join in practicing peace in all aspects of their lives.

0
SHARES
Share
Posted Under: 2017, Compassionate Action, Spring
About the Author: Koro Kaisan Miles and Jessica Morgan
Koro Kaisan Miles is the resident priest and teacher at Open Gate Zendo in Olympia, and former president of Northwest Dharma Association. Jessica Morgan is a sangha member of Open Gate Zendo in Olympia, and a former board member of Northwest Dharma Association.