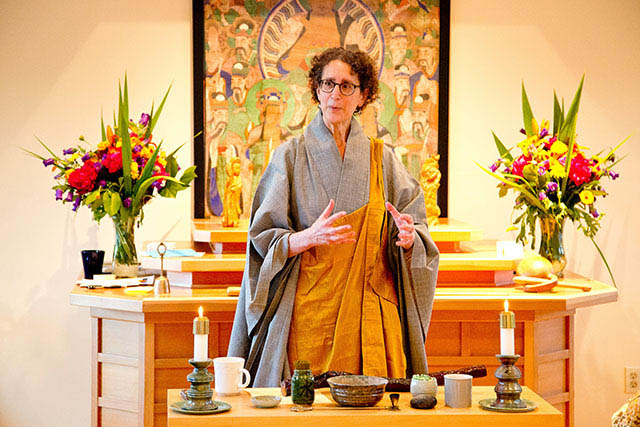 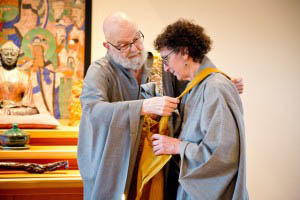 As Zen master, Jeong Ji is now the guiding teacher of the Seattle-area Blue Heron Zen Community, which is affiliated with the Golden Wind Zen Order, based in southern California.

Blue Heron and Golden Wind practice Zen Buddhism in the lineage of Zen Master Seung Sahn, the first Korean Zen Master to live and teach in the West.

At the happy occasion of Jeong Ji’s transmission ceremony, Zen Master Ji Bong introduced her as “an extraordinary woman of great kindness, compassion, and intelligence.”

While Jeong Ji characterizes herself humbly as a suburban housewife, her Zen students and colleagues know her as a talented and creative artist, author, poet, and teacher, with a keen intelligence and an accessible teaching style. 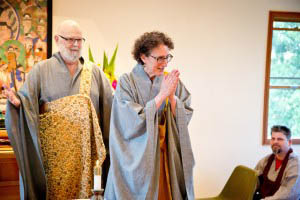 With her new position as Zen master, Jeong Ji joins a small but growing number of female Zen Buddhist leaders. While traditionally Zen has attracted more men, increasing numbers of women have come to practice at Blue Heron Zen Community since Feng started teaching as a Ji Do Poep Sa Nim (dharma master) in 2008.

“Having a woman teacher must be encouraging. A woman’s presence is its own message,” said Jeong Ji.

When Zen Master Seung Sahn came to the U.S. in the early 1970s, he acknowledged lay leaders alongside monastics, and opened a more equal role for women. 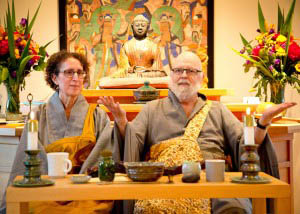 “Having lay people wear long robes had been unheard of in Korea,” Jeong Ji said. “Acknowledging women publically as teachers was also new. This was a quantum leap for Zen in the modern world.”

The fact that the transmission took place between two Americans is also significant in that it further deepens the roots of Zen in the West, and ensures that this particular Zen lineage will continue on to the next generation.

What will be her goals and direction as a Zen master and guiding teacher?

“We constantly rediscover our direction in the momentary world as it appears,” Jeong Ji said. “Having just started I’ll take a little time to settle in, but I will bring who I am as a whole person.” 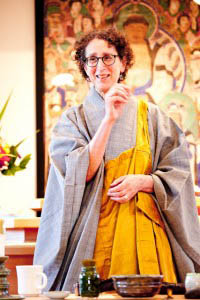 Jeong Ji speaks to those gathered.

Her teacher Zen Master Ji Bong brought dedication to practice, as well as his personal proclivities as a scholar and professor, with an emphasis on teaching Zen background. He did a lot to educate his students about Zen traditions, lineages, sutras, and the history of Buddhism.

Zen Master Jeong Ji brings her perspective as an artist, both visual and written, to her practice and teaching. She describes her approach to art, especially pottery, as mirroring her approach to Zen practice: combining technique with the artistry of not knowing, being open to what appears.

“I always felt that clay was my first Zen master,” she said. “Making pottery is a perfect metaphor for practice. It requires centering an unruly mass on a spinning wheel.”

While Feng makes beautiful raku Buddhas for her business Golden Wind Raku, she continues to write poems and stories infused with Zen. Her novel “Sid,” which recounts the Buddha’s life in parallel with a contemporary retelling of the story, was just released by Wisdom Press. 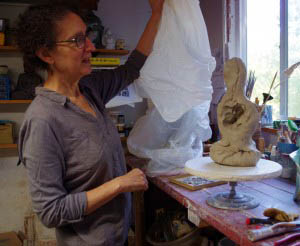 Feng also is an accomplished sculptor.

In the late 1970s and early 1980s, Feng lived and studied intensively with Zen Master Seung Sahn at the founding Zen center in Providence, Rhode Island.

After leaving in the early 1980s to finish college and then graduate school, raise three children, and grow her pottery business, Feng continued to practice Zen on her own. Since 1996 she has studied under the guidance of Zen Master Ji Bong, and prior to becoming a Zen master, she received the title of Ji Do Poep Sa Nim, in 2008.

To Jeong Ji, becoming a Zen master is very humbling.

“As soon as people hear the words Zen master, it suggests something special, an elevation,” she said. “We know that Zen is everyday mind which is extraordinary in its realization.”