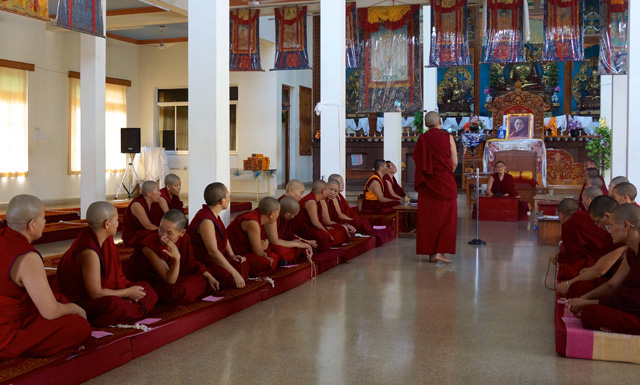 Much of the two weeks of exams was conducted in the presence of other monastics.
Photos: Tibetan Nuns Project

Twenty nuns in May passed the third of four years of examinations, as they neared their goals of becoming the first women of Tibetan ethnicity, in their Buddhist tradition, to win the equivalent of a doctorate degree.

Of the 20 nuns, seven were fully or partly sponsored through Tibetan Nuns Project, a non-profit headquartered in Seattle and in India.

The degree the nuns have been pursuing is called a Geshema degree. This is a relatively new term, because until recently only men could win the doctorate-level degrees, which have been called Geshe degrees. 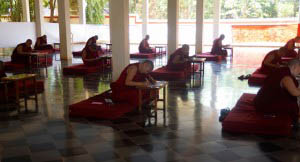 Nuns had to sit for lengthy written exams.

Geshes, and soon also Geshemas, are the most educated monastics in Gelugpa tradition, the newest of the four schools of Tibetan Buddhism. Geshes have a pivotal role in Tibetan Buddhism, and carry much of the responsibility for preserving Tibet’s unique religion and culture.

The path to obtain a Geshema degree is extremely rigorous. Exams take place over four years, and only after finishing a course of studies that takes at least 17 years,

Each May for four years the nuns must sit two weeks of examinations, which include both written tests and debate.

Once the nuns obtain their Geshema degrees, they will be eligible to assume various leadership roles in the monastic and lay communities. This will bring them one step closer to equality with monks.

The creation of Geshema degrees was a long process, because traditionally women in the Tibetan Buddhist tradition had not received this level of ordination.

But this started changing over the last decade, led by the vision of His Holiness the Dalai Lama, and with support from Tibetan Nuns Project and many others.

In 2012, after years of deliberation, the Tibetan Government in Exile in Dharamsala, India, passed a unanimous decision to grant Tibetan nuns the opportunity to receive the Geshema degree. 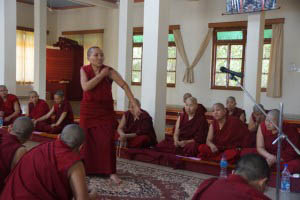 Traditional Tibetan debate, which includes expressive movements, was a key part of the examinations.

As a step in preparing for this decision, in 1997 the Tibetan Nuns Project took up raising the funds for an annual month-long inter-nunnery debate session called Jang Gonchoe. This did much to bring up the level of the nuns’ knowledge and abilities, and helped advance the process.

These debates also helped facilitate the steps leading up to receiving final approval for the nuns to seek the highest degree.

The 20 finalist nuns will sit their fourth and final set of exams in the spring of 2016.

Six of the finalists have been educated at Dolma Ling, one of the nunneries in India that are entirely supported by Tibetan Nuns Project. A seventh finalist, who was primarily supported by TNP, was from another nunnery called Geden Choeling.

Tibetan Nuns Project, which is a registered 501 [c] 3 charity in the U.S., has worked hard since it was founded in 1987 to provide education, food, shelter and medical care to hundreds of refugee nuns from Tibet.

The organization has taken the lead in opening up educational opportunities for the nuns. Through its sponsorship program for nuns, largely coordinated through the Seattle office, the Tibetan Nuns Project now supports and educates more than 700 Tibetan Buddhist nuns in India.

Venerable Tenzin, one of the nuns sponsored through the Tibetan Nuns Project, scored one of the top marks in round three of the examinations.

She comes from central Tibet but now lives and studies at Dolma Ling Nunnery and Institute in northern India. This is a nunnery that was founded by the Tibetan Nuns Project, and is one of the seven nunneries the project supports. 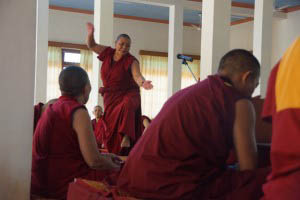 In Tibet, Venerable Tenzin and her six siblings helped care for their family’s animals and fields, which required that she leave school at age 12.  Determined to become a nun and pursue Buddhist studies, she escaped from Tibet across the Himalayas, hiding during the day to evade capture, and walking at night for 26 days.

Venerable Tenzin is happy about the possibility of becoming one of the first Tibetan Geshemas in the history of Tibet.

“When I first came to sit the exams, I had a strong feeling that I was daydreaming,” she said in a 2014 interview. “Is it happening for real? And then I realized that it is indeed happening in the history of the nuns. Such an opportunity never happened.”

Venerable Tenzin added that the journey has been long and hard.

“Generally speaking, Buddhist studies and philosophy are extremely vast and difficult. One needs strong commitment, extreme hard work and dedication once you decide to sit for the Geshema exams,” she said. “So I consider it a golden opportunity for which we struggled hard to attain.”

The success of the nuns who are working towards the degree is especially notable because most of them are refugees from Tibet. Some of them were totally illiterate when they escaped in the late 1980s and early 1990s. 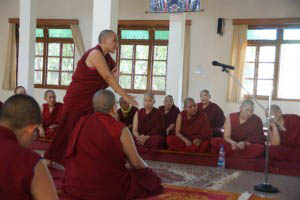 They arrived in India without any money or possessions after long, arduous and dangerous escapes. Some of them had been imprisoned and tortured in Tibet. They wished nothing more than to live, study, practice and teach in accordance with their spiritual beliefs.

Elizabeth Ferris from California taught some of the nuns when she volunteered at Dolma Ling in India from 1994 through1996. She has fond memories of Venerable Tenzin.

“My admiration for the nuns grew by leaps and bounds when I was teaching them and I was honored to be sharing their lives,” Ferris said. “In the years since then, I am always amazed by their dedication, perseverance and reverence towards their studies and values.”

Ferris added that the life of a nun is not easy.

“It is marked by tremendous sacrifices. In spite of it all, the nuns keep on,” Ferris said. “‘Never give up,’ said the Dalai Lama. They never have. They deserve my support and yours.”

The annual Geshema exams are organized according to the special regulation passed in 2012 and are carried out under the supervision of the Geshema Examination Board. This board is comprised of representatives from Department of Religion and Culture of the Central Tibetan Administration in Dharamsala, the Tibetan Nuns Project, the Institute of Buddhist Dialectics in Dharamsala, and six concerned nunneries located in India and Nepal. 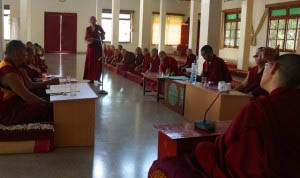 Each nun had to prove her knowledge is thorough.

Evaluation of the debate test is done by four especially respected Geshes, from the monasteries of Sera Je, Sera Mey, Ganden Shartse and Drepung Gomang.

The Tibetan Nuns Project has been communicating the nuns’ success with the nuns’ sponsors.

Sponsorship of a nun through Tibetan Nuns Project costs $30 a month and helps provide food, shelter, education and health care.

Sponsors are connected with individual nuns who write to them at least twice a year. Over time, special relationships often are formed.

Elen, a lawyer in California who has sponsored two nuns, said, “A donation to this cause benefits beyond helping just the nuns… it benefits the Tibetan culture, it benefits refugees from Tibet, it benefits education for women, it benefits the Buddhist religion and community and all of this spreads like a ripple of compassion for others beyond that community. This is not charity; it is an investment in humanity.”

0
SHARES
Share
Posted Under: 2015, Dharma Education, Fall
About the Author: Heather Wardle
Heather Wardle works part-time for the Tibetan Nuns Project in Seattle, sponsors a nun, and is also a staff writer at Lion’s Roar. She is a former senior reporter for Tibetan Bulletin, and volunteered in India in 1990 and 1991, a time when scores of nuns were arriving in Dharamsala after escaping from Tibet. She is the editor of ‘The Power of Compassion,” by His Holiness the Dalai Lama.