Offering of the 21 Praises of Tara at the Candi Sewu, Manjushri temple in Java.
Photos by: Parvati Forrest Burke

Five Northwest people traveled on pilgrimage to Southeast Asia in late June, where they also offered the “21 Praises of Tara Mandala Dance.”

The five – Kim Abbey, Maria Antilla, Phyllis Moses, Suzie Scollon and Scott Wurtz – were joined by people from other countries, creating a group of 22. 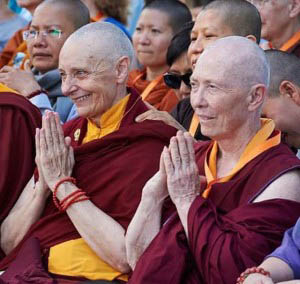 The Ven. Karma Lekshe Tsomo, co-founder of Sakyadhita, on the right. Next to her, Jetsuma Tenzin Palmo.

The group traveled to the Indonesian islands of Bali and Java.  The purpose was a Tara Dhatu pilgrimage led by Tara Dhatu founder Prema Dasara, who since the 1980s has upheld the tradition of teaching dharma through the sacred arts of dance, music, mudras, mantras and meditation.

The pilgrimage was timed to coincide with the 14th Sakyadhita International Buddhist Women’s Conference, entitled “Compassion and Social Justice.” More than 800 people attended the June 23 through July 2 conference, and their combined knowledge and energy was truly inspiring. 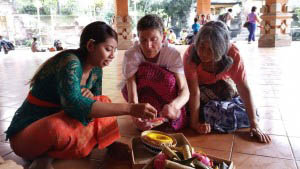 Ven. Thubten Chodron, abbot of Sravasti Abbey in Newport, Washington, was one of five presenters during the conference.

The Tara Dhatu pilgrimage began on Bali on June 10, so our group had many days to be together with our teachers, Prema Dasara and Myri Dakini, and to learn and practice the 21 Praises of Tara Mandala Dance. The training was supported by Phyllis Moses, a Tara Dhatu dance teacher from the Seattle area. 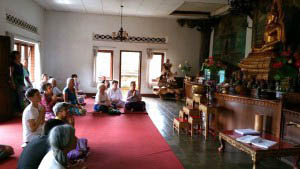 Other days were busy with trips to the tailor for fittings. Our costumes for the mandala dance were made by local seamstresses.

Tours to ancient Balinese temple sites were included, and we went to a sacred bathing temple called Tirta Empol, where each spout of healing water signified different body and psychic parts. There we participated in a Hindu prayer ritual, where we made flower, rice and coin offerings with a Hindu priest leading, and blessed water was given to us. 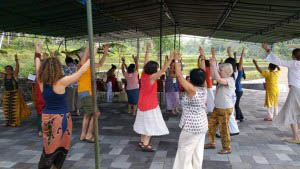 Another day we traveled to the ancient mother temple of Besakih on Mount Agung, Bali’s tallest peak. Built of volcanic stone in the 11th century, the temple has been a sacred Hindu ritual site since then.  About 80 percent of Balinese people practice Hinduism.

Our time at Melati Cottages in Ubud culminated on June 23 with an Offering of the 21 Praises of Tara Mandala Dance to the local community, hotel staff and their families and friends.

We ended our time on Bali with a three-day stay on the north coast for a taste of the seaside, at the Sunari resort in Lovina. 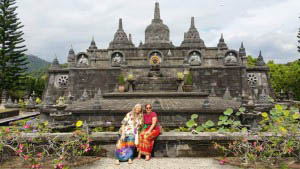 Our teachers, Prema Dasara and Myri Dakini, at Brahmavihara-Arama Temple in Bali.

There the group enjoyed the hot spring waters, where we danced the circle of Tara Praises while swimming!

We also visited the awe-inspiring Thai Buddhist temple and gardens, Brahmavihara Arama, where we meditated deeply.

On June 22 we flew to the Javanese city of Yogakarta, where we boarded buses to the huge and beautiful Sambi Resort and Conference Center, where we stayed for the next 12 days. 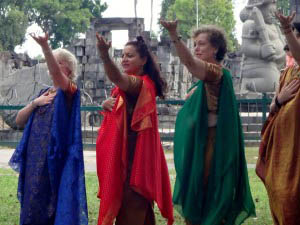 Because the island of Java is 90 percent Muslim, many of the young greeters hired and trained by Sakyadhita wore their head scarves. They talked to us about their practice of tolerance, they joined us in many of the Buddhist workshops, and they were generally fun young kids on their summer jobs. This was so happy and heart-warming.

The compassion and social justice  theme for the 14th Sakyadhita Conference was on our name tags, and resonated from the opening ceremonies through to the completion.

On the first day, all 800 attendees were transported by buses to the governor’s residence, where government officials welcomed us in an open-air performance hall. 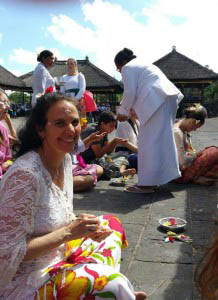 Each day was full with a morning and an afternoon panel discussion, followed by breakout workshops. Just before dinner hour each day, Buddhist nuns chanted on the main stage.

The food was wonderful, with three delicious all-vegan meals daily, and an afternoon tea, all served in two lovely dining pavilions. Local chefs cooked the food, in Indonesian and other Asian styles.

The evening dharma talks were given by three well-known monastics.

Venerable Chodron spoke on “Open Heart, Clear Mind,” the title of one of her many books. 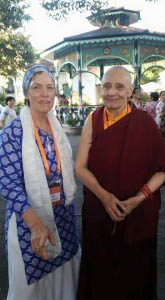 And Jetsunma Tenzin Palmo, current president of Sakyadhita and subject of “Cave in the Snow,” about her 12-year retreat, spoke on “Letting Go: the Art of Renunciation.”

After closing ceremonies on June 30, about 400 of us went on a two-day journey to sacred sites.

We rose at 3:30 a.m. on July 1 to travel to Borobodur Stupa, a vast Buddhist temple complex in central Java, for sunrise.

On July 2 we visited Candi Kalasan, another ancient temple.  It is said that this temple, built in 778 A.D., is a praise to the deity White Tara.

The second day was also full of excitement for the Tara Dhatu Dancers in our group. We offered the 21 Praises of Tara Mandala dance to the tour members, and to nuns Karma Lekshe Tsomo and Jetsunma Tenzin Palmo and their attendants, outside of the Manjushri Temple. This temple was built in 792 AD.

The Tara  Mandala dance is a praise and a prayer, and each of us entered into the meditative state as we offered the audience the blessings of Tara.

Tara Dhatu is a national organization, coordinating Tara circles in many U.S. cities, and throughout the world.

Sakyadhita is an alliance of more than 2,000 people from 45 countries, women and men, lay and monastic members.

0
SHARES
Share
Posted Under: 2015, Dharma Healing, Arts, Fall
About the Author: Kim Abbey
Kim Abbey serves on the board of Sakya Monastery of Tibetan Buddhism in Seattle. She has been a Buddhist since 2009, and her root Guru is HH Jigdal Dachen Rinpoche. As a member of Tara Dhatu, Abbey has practiced the 21 Praises of Tara Mandala Dance since 2011. She considers Prema Dasara her primary dharma teacher.