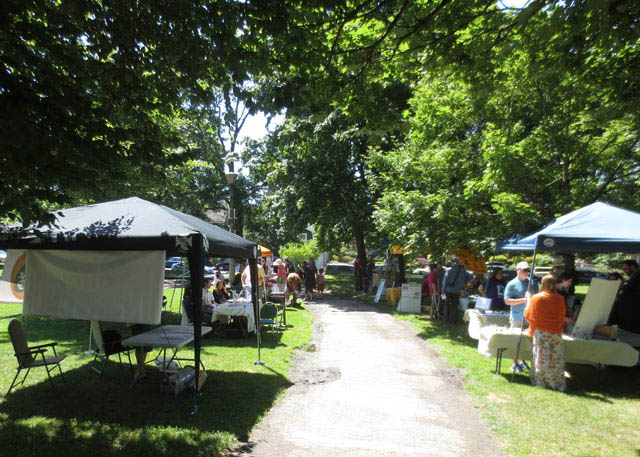 “Peace in oneself, peace in the world,” was the theme of the 12th annual Portland Buddhist Festival, dedicated to Vietnamese Zen Master Thich Nhat Hanh, who is currently recovering from a serious stroke.

The June 13 festival was celebrated at Colonel Summers Park in Portland.  The event brings together sanghas (communities) from many Buddhist traditions to celebrate the teachings of the Buddha, promote friendships across traditions, and educate the public about Buddhism. 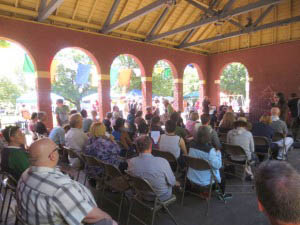 Many people gathered for events in the central pavilion.

The Portland Buddhist Festival is organized by the Portland branch of the Buddhist Peace Fellowship, with the help of many volunteers and sanghas in the local Buddhist community.

The event featured a variety of ceremonies, chants, and teachings from multiple traditions. It began with 108 bells and an incense offering, and ended with a dedication of merit. There was a workshop about starting a meditation practice and a group walking meditation.

The core of the event featured individual booths from different sanghas, who handed out flyers, pamphlets and other materials that explained their traditions to newcomers.

For someone new to Buddhism, it was a great opportunity to learn about the variety of Buddhist traditions represented in Portland, and to interact with different practitioners who represent these traditions.  For more experienced practitioners, it was an opportunity to see old friends from other sanghas, and to meet new people. 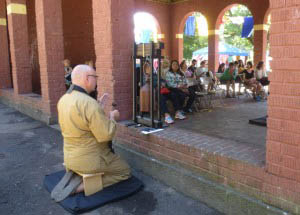 Braza gave a chronology of Thay’s life, and discussed the Order of Interbeing, an ordination for monastic and lay practitioners, which was established by Thay in the late 1960s. Braza also talked about the “Eight Realizations of Thich Nhat Hanh” which is Braza’s summary of Thay’s teachings.

One thing Braza emphasized is that Thay teaches about the importance of sangha, and discourages his students from thinking of Buddhism as a solitary path that can be practiced by oneself.  Thay’s concept of “Interbeing” emphasizes the inter-connectedness of all things, and when people can see this truth, they naturally become kinder and more compassionate. 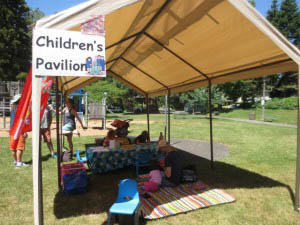 Parents exploring the bountiful array of materials with their children in the children’s pavilion.

After the keynote talk, there was a panel discussion with teachers from four different local groups.  The panelists spoke on the theme of “Peace in Oneself, Peace in the World” and how to embody this ideal.  The following is a summary of some points that were made on this topic.

Panelist Sakula Mary Reinard, spiritual director of Portland Friends of the Dhamma, spoke about the Buddhist precepts. She described how the precepts are actually related to “peace,” and are not merely rules we have to follow in order to be good Buddhists.

Reinard said that peace within means that our actions and our words are more peaceful.  This practice starts with being more responsible for our own discomfort, and not blaming others so much for our pain.  It also involves “holding ourselves responsible to other people’s joy and pain,” which is why the precepts are important. 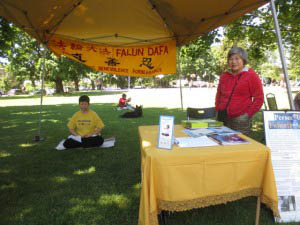 Portland Friends of the Dhamma is a Theravada group affiliated with the Thai Forest Tradition.

Panelist Jay Stewart, a teacher from the Portland Shambhala Center, spoke about the importance of having unconditional friendliness towards ourselves.

Stewart said that when we see things about ourselves that we don’t like, but are powerless to change, we don’t have to denigrate ourselves and feel bad about who we are.  Instead we can make friends with ourselves, and embrace the totality of ourselves with loving kindness. Referring to the Tibetan meditation practice of shamatha, or peaceful abiding, Stewart said the essence of this practice is to “not be afraid of who we are.”

Portland Shambhala Center is the local unit of a global Tibetan group founded by the former Chogyam Trungpa Rinpoche. 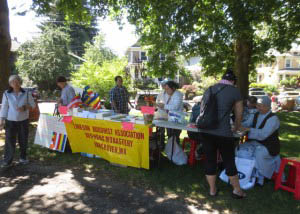 The Cambodian nuns of Buu Hung Monastery sharing books, charms, and how to fold a napkin in the shape of a lotus.

Craig Preston, who teaches Tibetan language at Maitripa College, shared a small story that illustrated the essence of Buddhism.

One day a young girl and her friend were playing in her parents’ house and they broke a vase by accident.

The friend said, “Won’t your parents be angry?”

“Oh no,” said the first girl, “My parents are Buddhists, it’s in their religion that things break.”

Maitripa is an accredited Buddhist University in Portland. Preston considers himself a language instructor rather than a religious teacher. For him learning Tibetan has been an opportunity to give other people access to important religious texts, to which they would not otherwise have access. 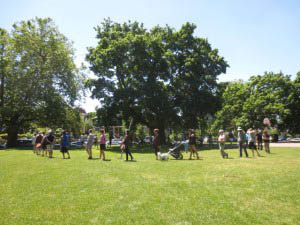 Panelist Alison Shin’ei, a long-time practitioner with the Dharma Rain Zen Center, said metaphorically that the greatest enemy is not the dragon that roams in the forest, but the scars and wounds we carry within us. She emphasized the importance of patience and forgiveness in Buddhist practice.

Shin’ei also took the time to honor her teacher Kyogen Carlson, one of the founders of the Dharma Rain Center, who passed away about a year ago.   Carlson was instrumental in establishing Zen practice in Portland in the early 1980s.

There were many children at the event, and festival organizers provided a children’s pavilion, with its own schedule and organized activities.  A favorite activity for everyone is the treasure hunt, where children have to go around and speak with people at the various sangha booths, seeking clues about where the treasure is hidden. 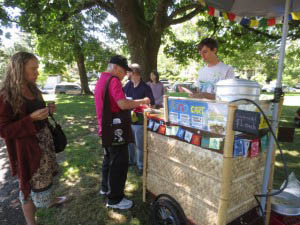 There was also a sing-along activity sponsored by the Dharma Rain Center’s dharma school, which is a preschool based on Buddhist teachings.

Portland is blessed to have so many different strains of Buddhism represented in our city. Events such as this one encourage collaboration and communication across traditions, and help the general public develop an appreciation for the teachings of the Buddha.

Although every tradition may have its own unique style and emphasis, they are all connected back to the Buddha, and they all work toward the transformation of suffering.

0
SHARES
Share
Posted Under: 2015, Fall, Sangha News
About the Author: Jeff Kerr
Jeff Kerr has practiced with several sanghas in the Portland area, and his primary group is the Community of Mindful Living, in the Thich Nhat Hanh tradition. He is an aspirant in the Order of Interbeing, and has volunteered as a meditation facilitator at jails and prisons. He is a former board member of the Northwest Dharma Association, and currently serves as the regional coordinator for the Mahasangha project.