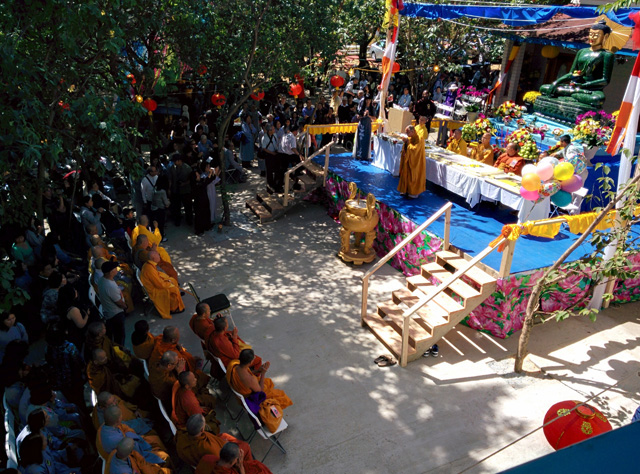 Buddhist leaders, temple members and temple friends, gathered from around the region for the ceremony.
Photos by: George Draffan

The visitors also were there to see the construction progress at the Medicine Buddhist Temple, also called the Buddhist Cultural Center of the Northwest, which is nearing completion after four years of work. 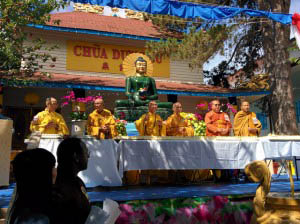 The 13-foot-high Jade Buddha for Universal Peace statue, carved of gem-grade jade in Thailand, was visiting Duoc Su for the second time.

The Jade Buddha statue was patterned after the Buddha statue inside the Mahabodhi Stupa in Bodhgaya, where the Buddha achieved enlightenment. It has traveled around the world since 2009, visiting nearly 60 cities. This was to be its last visit to Washington state, before returning to Australia.

Adjacent to the statue was the other attraction, the nearly-complete replacement to the previous Duoc Su Ten Thousand Medicine Buddha Temple. 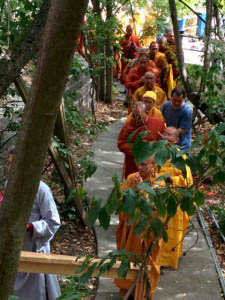 Buddhist monks from many traditions entering the plaza.

Their new three-story building, at 6918 42nd Ave South in Seattle, has been gradually built with labor and funds donated by visitors and members of the temple.

The center of it is a large mediation hall. Members, most of whom are Vietnamese, are very excited about the larger space because it will be much more supportive of study and worship meetings. Last details being completed are the stairs, gardens, and new parking spaces.

At the August 8 ceremony, the courtyard, garden, and trees surrounding the temple were filled with lanterns, flags and banners, fruit and incense. Large and small Buddha statues, made of stone, metal, and ceramic, were everywhere on display.

Nancy Truong and Maurice Moseley, both long-time members of the Duoc Su temple, served as masters of ceremonies.

Truong said the ceremony was “very important to temple members, because it marks the beginning of a new and decent place for us of worship. Our burning wish is to have a decent place to worship the Buddha and practice Buddhism together.” 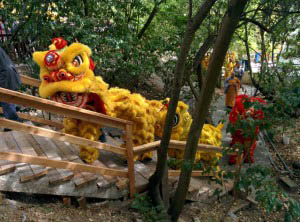 Lion dancers entering from the garden.

At noon the Duoc Su Lion Dancers, who recently performed at the Northwest Folklife Festival, led several dozen monastics to their seats of honor. Visiting were monks and nuns from surrounding communities in Washington and Oregon, and some from as far away as Vietnam and Thailand.

The festivities included flower dances by young temple members, and songs led by the temple’s head monk Thich Dong Trung. He then gave a homily on Buddhist virtues of kindness, generosity, and peace.

A delicious Vietnamese lunch and a birthday cake were shared by all. 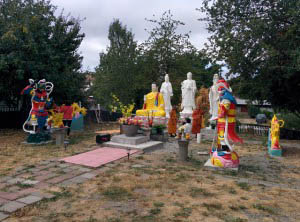 The influence of Vietnamese culture in the ceremonies was very strong and much appreciated by attendees, who enjoy sharing their roots, and their Buddhist values, with their Seattle neighbors.

“Buddhism is universal in terms of compassion, forgiveness and peacefulness,” Truong said. “Religion, whether Buddhist or Christian, can harmonize with the culture of the country where it is worshipped. Vietnamese Buddhist immigrants have brought to the U.S. both Vietnam Buddhism and the Vietnamese culture, which will certainly enrich and diversify the culture of the U.S.”

In his remarks, Moseley stressed that “the temple is active in the community, and strives to maintain good relationships with their neighbors.” 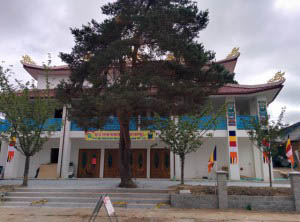 One way temple members do this, she said, is by hosting a weekly nutritional food program for Vietnamese seniors, co-sponsored by the Asian Counseling and Referral Service.

The temple welcomes visitors, and about 50 people attend services on Saturdays from 11 a.m. to 2 p.m., and Sundays from 2 p.m. to 4 p.m. On festival occasions hundreds of people attend.

To schedule a visit, please email Master William Lee at chuaduocsu@duocsu.org, or call 206-725-1070.

The closing ceremony for the Jade Buddha for Universal Peace visit was Aug. 15.

0
SHARES
Share
Posted Under: 2015, Dharma Healing, Arts, Fall
About the Author: Carla Prater & George Draffan
Carla Prater is assistant director of Buddhist Global Relief. She lives in Seattle where she is coordinating the 2015 Seattle Walk to Feed the Hungry, at Volunteer Park on Saturday, Oct. 17, from 9 a.m. to noon.

George Draffan is a Seattle-based Buddhist practitioner, who teaches Buddhist meditation and Taoist energy practices. He is a long-time volunteer for the Northwest Dharma Association, and served as president from 2001 to 2005.