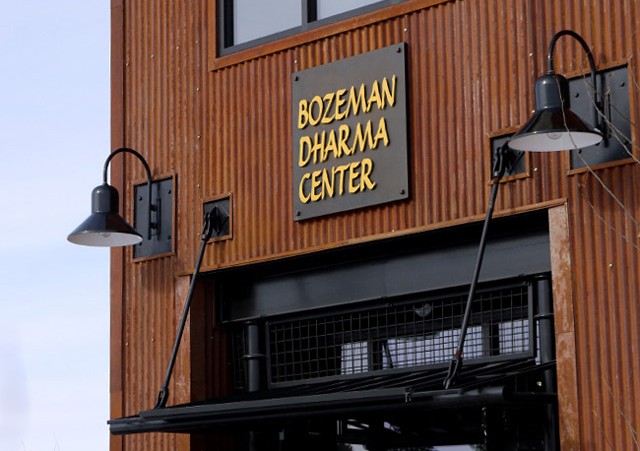 The center sign, on the building’s rusted metal exterior, reflects the aesthetics of the West.
Photos by: Isabel Colón, Brittany Tyler

Three dharma groups in Bozeman, Montana, are growing fast under one roof, just months after they opened the Bozeman Dharma Center.

The center, in an upper floor of a downtown Bozeman professional building, is the new home for the Bozeman Insight Meditation Community (BIC), the Bozeman Zen Group, and the Bozeman Dharmata Sangha.

Bozeman Dharma Center is the culmination of an idea that had been simmering in the community for many years.

Mem Schultz, Susan Morgan, Suzanne Colón and Alice Ponce Robison founded it to provide a common home to the Insight, Zen and Tibetan sanghas. So far, the center has proved that the benefits and synergies of sharing a space are well worth the effort. 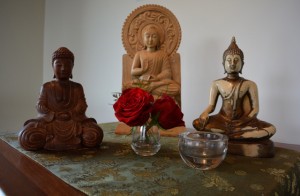 Buddhas from the three resident sanghas, united on a side altar symbolizing the “coming together.”

“We are hoping to grow slowly, thoughtfully and organically,” said Robison, founder and co-leader of the Bozeman Insight Meditation community. “We are teaming up with people in the community to lead sits on the university’s campus, organize wilderness retreats and mindfulness walks in nature.

“Plans to launch a teen sangha and a mindful parenting group are taking shape, as well as developing programming around engaged Buddhism and working with illness and death,” she said. “It’s really exciting to be a part of this and watch it grow.”

As evidence of the center’s success, attendance for the three groups has doubled since the center opened.

The center opened its doors in December, 2013 and been slowly but steadily expanding its programs since.

Colón said shared centers in the United States are rare, given the three lineages’ tendencies to prefer different decor and cultural emphases.

“In large cities, sanghas have the numbers to maintain their own spaces,” she said. “But in a town of 40,000, the synergies afforded by coming together make a compelling argument for sharing a space.” 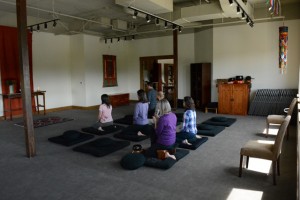 A drop-in sit, in the center’s spacious main hall.

The Bozeman center was modeled on Ekoji, a shared center in Richmond, Virginia, which provides a home to four resident groups of different Buddhist lineages.

Schultz and Morgan were instrumental in shaping the vision and the mission of the dharma center.

“The center is a place of refuge and silence where we can offer a full schedule of sitting practices, instruction and study of Buddhist teachings,” Schultz wrote. “The programs are meant to inspire practice and honor the inner life – solitude and silence, creativity and growth, compassion and wisdom. In these fast-paced and extroverted times, there is a need for serene and quiet places to nurture our spiritual lives and to foster inner growth.”

The center shoulders the financial responsibility, asking for dana (donations) from the groups at a level they can manage without stress. The groups share a library, drop-in sits and marketing resources, fueled by volunteers from all three sanghas working together. There has been a definite sense of the “rising tide lifting all boats” here, said Colón, “with the groups enjoying increasing numbers and higher visibility as a result of the center’s opening.”

The three resident sanghas remain autonomous. Each has its own teacher or leaders, its own board, programming selection, and each independently arranges for teachers to come in and teach. In addition, the center itself offers workshops, movie nights and events for the entire community, varying programs among the three lineages. 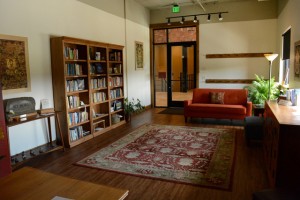 The foyer includes a library, and a place to read.

The reaction among the members of the three resident sanghas has been very positive, but not without constructive criticism. Colón says the board is aware that some practitioners would prefer a less-professional building, and the addition of gardens and outdoor walking paths.

“As we begin to think long-term, we will be looking for a permanent home that’s a bit ‘earthier,’ has outdoor spaces and can allow for more than one group to meet at a time,” she said. “This is something that will be important as programs expand.”

The center evolved from need, because in the summer of 2013, Bozeman’s local Insight meditation group was being bounced to yet another yoga studio, and one of the area’s Tibetan groups was still meeting in the founder’s living room. The sanghas were led and maintained by lay practitioners, meeting weekly in living rooms and yoga studios through the years, and renting spaces when teachers came to town to lead retreats.

The team of sangha leaders and long-term practitioners provided the leadership and secured financing, with support from legal and financial consultants who offered services pro-bono. The founders also were able to secure a grant to underwrite a two-year lease, for what would become a common home to the three resident sanghas. 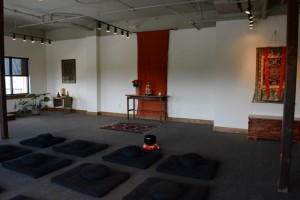 The meditation hall was designed to embrace all three traditions, and at the same time allow each sangha to focus on its own practice.

The three founding groups have been dharma leaders in Bozeman for years. The Bozeman Insight Community was established in 1996 by Sheila Devitt who hosted the group in her home for a decade. Wendy Roberts founded the Zen group in 1997 and Susan Morgan established the Dharmata Sangha in 2008.

Now the groups meet weekly at the center, each on its designated evening, and can offer retreats, workshops and streamed programs on the weekends.

The three group leaders have expressed gratitude to the center’s founders and staff for providing them this space.

“The Bozeman Zen Group’s participation in the dharma center has opened up possibility for many of those who might be reticent to encounter the rigor and mystery of Zen practice,” said Zen Group teacher Karen DeCotis. “The simple and elegant beauty and care of the center has allowed the ordinariness of Zen practice to be revealed, and more practitioners are diving in as a result.”

Robison is aware that Bozeman’s Gallatin Valley has long been a sacred space of shared spiritual practice. 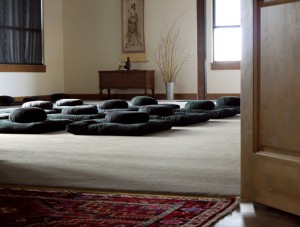 The meditation room door is open to all.

“Native Americans call the area ‘The Valley of the Flowers,’” she said. “A Lakota elder told me that the native tribes regard this area as a peaceful valley where different tribes would cross over on their way from the mountains to the plains to hunt during certain seasons, through what they called the ‘Common Hunting Grounds.’”

This valley continues as a peaceful gathering place for native peoples, Robison said. The largest free powwow in the U.S., a traditional celebration of Native American dance and culture, is annually held at Montana State University.

“It is within this rich heritage and upon this beautiful land,” she said, “That the Bozeman Dharma Center was established.”

The Bozeman Dharma Center is a new adventure, an experiment that many of us in Bozeman foresee as a long-term benefit to the community. If you are traveling through Montana please check our website to see what’s going on, and come by and practice with us.