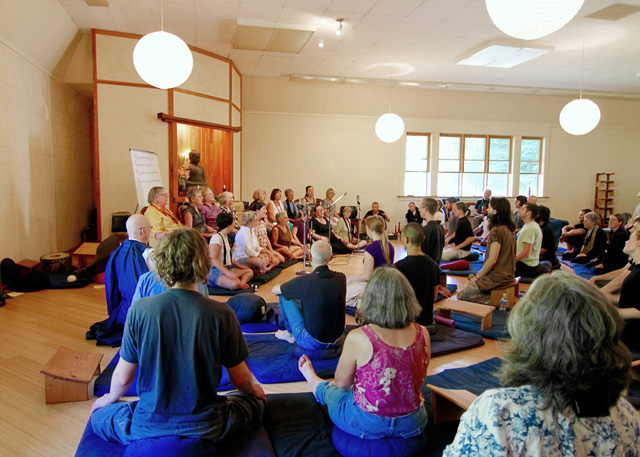 Sixteen members of the Portland Threshold Choir led an hour of chanting again this year.
Photos by: Jessica Lowe

A diverse group of spiritual friends gathered at Great Vow Monastery in Oregon on August 1, for the 13th annual 24-Hour Interfaith Chant for Peace.

The sound of chanting filled the zendo, halls, and surrounding meadows from Saturday noon to Sunday noon, with the energy continually refreshed by new participants arriving.

The Chant for Peace is distinguished by its 24-hour cycle of nonstop chanting, with each hour led by a representative from a different spiritual tradition. This year’s chant leaders included some new to the event, as well as an eclectic mix of familiar contributors. 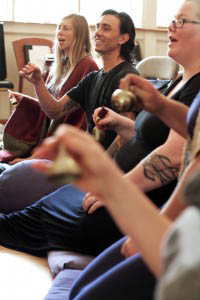 Bells were distributed to everyone for one chant; here Elizabeth Thompson, Nadia Trask, and Daimei Marmaduke join in.

Great Vow Monastery, just outside of Clatskanie, Oregon, is 70 miles north of Portland, not far from the Columbia River.

Chanting was opened by a minister from Eckankar, a modern religion promoting direct knowledge of God through light and sound. As the noon sun warmed the Great Vow zendo, she gently summoned the collective voice with harp song, before leading the group in toning the syllable HU, regarded by Eckankar as the “Sound of all sounds.”

The simplicity and universality of this chant made it a compelling starting point for the 24-hour offering, while highlighting the essential purpose of Chant for Peace: to unite a plurality of spiritual voices in celebrating the peace at their common core.

A number of Buddhist groups from throughout the Portland area contributed their energies to this year’s Chant for Peace.

The Portland Community of Mindful Living, a sangha guided by the teachings of Thich Nhat Hanh, returned to share their healing balm of compassion and loving kindness. Reverend Meiko Jones, of the Portland Buddhist Priory, led a melodic version of the Prajnaparamita mantra, as found in the Heart Sutra.

In keeping with their annual tradition, Dharma Rain Zen Center chanted the Enmei Jukku Kannon Gyo with impressive vigor. Shambhala Portland also made an appearance, leading the assembly in a circumambulating homage to basic goodness. 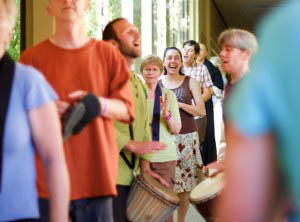 At the end of each hour, the group leads a procession through the halls of the monastery.

The second hour was led by members of the Baha’i faith, whose magnanimous, optimistic chanting invoked this same unifying spirit. By mid-afternoon, the monastery grounds were resonant with a growing confidence in the power of spiritual fellowship and common intention to illuminate the suffering world.

Each of the many traditions involved in the event found a unique way to cut through the boundaries of culture and ideology to affirm the basic message of peace.

This affirmation was evident in the soulful kirtan-style chanting led by Jewish renewal organization P’nai Or (Faces of Light), a regular participant in Chant for Peace. Another returning group was the Threshold Choir, a nonsectarian female vocal ensemble, which offers healing music to those facing life’s transitions in the Portland and Longview areas.

Local representatives of the Sufi Order International once again added their voices, as did the radiant, harmonium-accompanied yogis from Ananda Portland, a community practicing in the lineage of Swami Yogananda.

Dances of Universal Peace, a syncretic movement of spiritual dancing originated by mystic Samuel L. Lewis in the late 1960s, reappeared for yet another joyous enactment of love and inclusiveness. 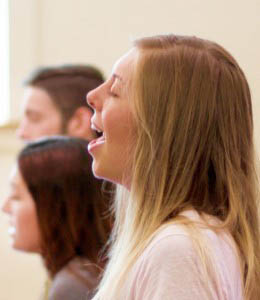 In the early morning hours, the collective body was enlivened by energetic drumming and chanting from members of the Lakota community.

Other returning participants included an elegant set of Gregorian chanters (accompanied by dulcimer), some kundalini yoga practitioners (one of whom offered a chant for “embracing the unknown free of fear”), and representatives from SpiralWorks, an organization involved in earth-based spirituality.

The Zen Community of Oregon held a strong and welcoming presence as hosting organization, with its sangha involved in all aspects of the event.

A dedication of merit was read as the hymn serenely approached its end, naming all those added to a list by participants, asking that they receive whatever benefits may have been generated during our short time together. 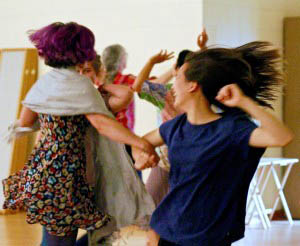 While some chants were gentle and contemplative, others were joyful and generated great energy.

Attendance at the 13th annual Chant for Peace was strong, and the vibrancy and goodwill participants brought to the event was inspiring. Many remained awake for the full 24 hours, with some spending nearly all of that time attentively engaged in the zendo. Others stayed for shorter periods, or offered service in the background, and their presence was no less vital.

It was joyful to feel the wakefulness, the color, the warmth of friendship and conviviality, sweeping through the monastery and conveying its vibratory imprint. The whole web of life at Great Vow was nourished by this energy; the plants benefited; the animals benefited; the building itself benefited. The clouds in the sky received incalculable blessings from the boundless field of our wholehearted intention.

The Chant for Peace is described on the Great Vow website in this way: “During the 24-Hour Interfaith Chant for Peace we come together to appreciate each tradition’s unique expression of the universal desire to be free from violence, hatred, and suffering. We form one community and join our voices together, beginning to cultivate the peace and understanding that is so desperately needed in the world.” 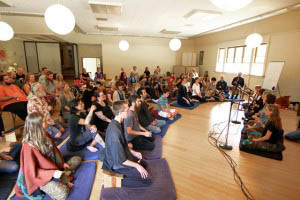 In practicing this aspiration, we taste the myriad flavors that differentiate the great wisdom traditions and actualize their relative potencies. We also taste the one flavor of indestructible unity that is their ultimate essence.

Both of these inseparable sides of our experience open us to the pulse of an infinitely interconnected heart, whose potential for transformation has no limit.

0
SHARES
Share
Posted Under: 2015, Compassionate Action, Fall
About the Author: Patrick Dunn
Since 2013, Patrick Dunn has been a resident at Great Vow Zen Monastery in Clatskanie, Oregon. Great Vow is a monastery dedicated to intensive, full-time Zen Buddhist practice in the White Plum Asanga school.