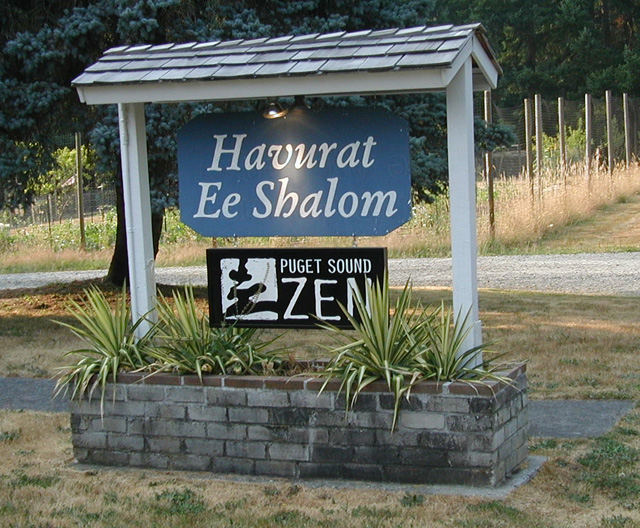 Puget Sound Zen Center and Havurat Ee Shalom are sharing a single space, and finding benefits for both of them.
Photos by: Eric Horsting

Pressed by a need for more space, the members of the growing Puget Sound Zen Center have opted to share the facility of an existing Jewish congregation.

In June the 60-member Zen center started practicing at Vashon Island’s Havurat Ee Shalom, for a trial period that will last six to eight months. Vashon is a residential island just west of Seattle. 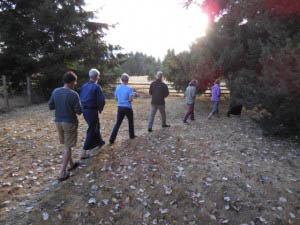 The sight of Zen sangha members in walking meditation was a surprise for some in the Havurat congregation.

The Zen center has moved from being the sole occupant of a small garage-turned-artist- studio looking out at the waters of Puget Sound, to sharing a much-larger stand-alone building.

The shared space is situated in a peaceful pastoral location on the island’s west side. If the trial period is mutually beneficial for the Buddhist and Jewish people, they’ll sign a long-term lease.

Zen center Abbot Koshin Christopher Cain said the idea of moving into Havurat Ee Shalom came as a breakthrough, but only after a year-long search.

“We visited with the Havurat team and a light bulb went off,” he said, adding that his thought was, “Wow, this would be perfect. It’s so simple and spare, it’s easy to use for Zen.” 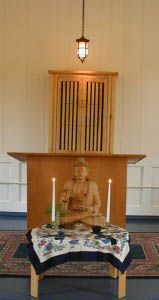 Zen center members put the Buddha in place for each sit. Behind is the ark of the covenant, the place where the Jewish Torah is traditionally stored.

The Zen center had been torn between finding something with the convenience of being in town and the nice feeling of being in the country. Several locations in town were considered, but for various reasons they did not work out.

At first the idea of sharing raised questions, but as talks progressed with Havurat President Louise Olsen and Treasurer Daniel Asher, it became clear that everyone really wanted to share.

“It’s working just fine.  Everybody I talk to loves it so far. There’s no angst,” Asher said. “We had an empty building, generally using it only twice a week.

“There’s more good things to come,” he added. “The more the building is used, the better. There are no grounds for conflict.”

When a Havurat member asked Asher, “What about the noise?” Asher said, “We couldn’t find a quieter group of people.” 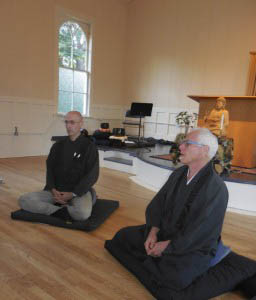 He was referring, humorously of course, to the fact that much of the Zen service involves people sitting and meditating for extended periods, or walking silently outside around and through the trees.

“Now we have to figure out how the landlord/tenant thing works,” Asher said. “Who supplies the paper towels and so on?”

The Zen center people have been working hard to be good partners, by organizing the main meeting space so that all of the items used during the group practice sessions are removed when the meeting concludes.

The Zen center offers Sunday morning services at 10 a.m., and a Wednesday evening meditation at 7 p.m.

Before each session starts, members place their wooden statue of Buddha at the front of the hall. When the session is done, Zen members move the Buddha behind one of two sets of shoji screens that cover the rear corners of the space. The group also stores cushions, drums, candles, and chairs there.

In this way the Zen center honors the Jewish spiritual practitioners, with whom they now share the space. 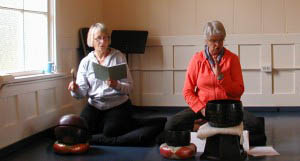 In announcing the new arrangement to Havurat members, President Olsen said, in a letter addressed to all Havurat members, that the board made the decision to share the space after careful consideration of building use and of the fiscal needs of Havurah.

She added, “We look forward to welcoming this fellow Vashon community into our lovely space. In the near future, we anticipate the members of the Zen community will join us in making improvements to our now-shared space.”

Olsen said she was looking forward to a shared introductory potluck, as well as to joint efforts to improve things inside and outside the building. 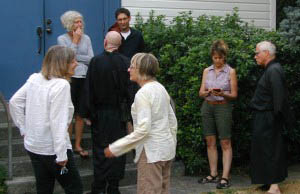 “We will be discussing some upgrades that will be mutually beneficial,” he said. “We can provide additional people power.”

What has surprised many is the unusualness of a Zen center meeting in a building owned and used by a Jewish community.

But it’s not altogether strange.

Twenty-five years ago, Seattle Insight Meditation Society, another Buddhist group, started up in the basement of Keystone Congregational Church in Wallingford. That group, known as SIMS, moved as membership grew to Congregation Beth Shalom on 35th in Northeast Seattle, and then later met at St. Mark’s Episcopal Cathedral on Capitol Hill. 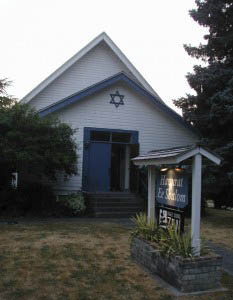 It now operates out of its own space in the SODO area south of downtown Seattle.

The Vashon Island building the two Zen and Jewish groups now share has a long history of different owners.

Norwegian Lutherans originally built the structure in 1909. When Lutheran attendance fell, that congregation gave the building in 1926 to the Bethel Evangelical Church. That group sold it to the Havurah group 10 years ago, Asher said.

In addition, from 2004 through 2006, the Vashon Unitarians shared the Havurah space in the same manner as Zen Center does now, before moving on to their own space.

Koshin attributes much of their new home’s sparse interior, a perfect complement to Zen practice, to the esthetic of the original builders.

“The Lutherans made it that way,” he said. “They were Norwegian.”

0
SHARES
Share
Posted Under: 2015, Fall, Sangha News
About the Author: Eric Horsting
Eric Horsting for eight years wrote and edited for the Vashon-Maury Island Beachcomber, after 32 years teaching literature and creative writing at Antioch College in Ohio. As a member of Puget Sound Zen Center he helps out with publicity. He joins Buddhist tradition after a Unitarian and Presbyterian youth.