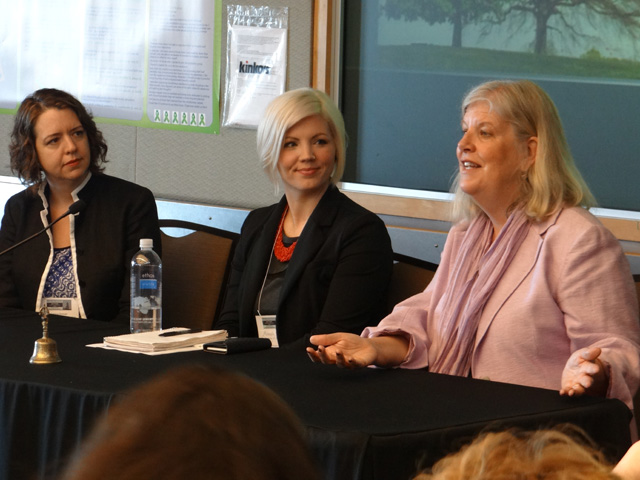 People came from around the world this spring, to attend a Seattle conference on mindfulness, and how it’s being applied to the welfare of young people, in the modern world.

While mindfulness is traditionally associated with Buddhist monastics’ peaceful contemplation, educators and psychologists are now applying the practice to helping emotionally charged situations, after violence and natural disasters, in counseling at-risk people, in education, and in fostering social and psychological development.

Sponsored by the University of Washington’s Center for Child and Family Well-being, the two-day conference drew about 160 people, or twice the number as last year, said Kristina Ponischil, the event organizer. 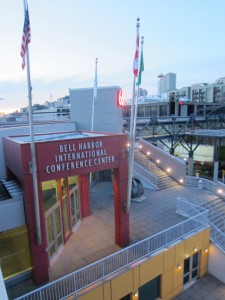 The conference was held at the Bell Harbor International Conference Center, on Seattle’s waterfront.

Presenters came from as far away as Tel Aviv, Israel, and from the University of Washington itself. The audience included counselors, teachers, social workers, parents, some students, and at least one yoga instructor – people with a common interest in helping people.

The interest in mindfulness is to fill what Liliana Lengua, director of the Center for Child and Family Well-being, said was “A desperate need out there.”

Although the word “mindfulness” might mean something slightly different to different people, it generally refers to techniques for slowing down and observing your thoughts and feelings, without getting caught up in them. It often includes paying attention to the breath, or taking deep, calming breaths.

Researchers have found that while stress produces adrenalin in the body, prompting a fight or flight reaction, mindfulness produces oxytocin, which is associated with kindness and compassion and is sometimes referred to as the “bonding hormone.”

A mindful approach gives people a sense of empathy and acceptance, allowing people to choose the “high road” rather than the “low road” in life, said Barbara Burns, who spoke about mindfulness in promoting resilience in children.

While studies note that stress can be transferred from one person to another, so can a sense of well-being. The big unknown – the question for further research – is exactly how this happens. By what mechanism does one person’s emotional well-being influence another person? 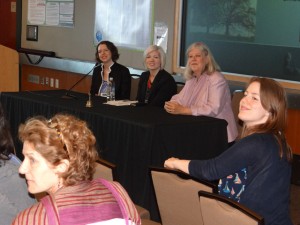 People came from around the world, including from Israel and California.

Sharon Stanley, a researcher who spoke on healing trauma through relationship and movement, showed a short video of what appeared to be a father and his infant son. When the father spoke to the infant, the child’s face lit up, he spoke back; he cooed and oohed, as if the two might invent a language between themselves.

This video hints at the healing power of interactions taking place in the here and now, suggested Stanley, whose interest in mindfulness stemmed from her work with suicidal teenagers. “We need mindfulness to bring vitality back to traumatized systems,” Stanley said.

Other presenters discussed the benefits of mindfulness practices in work with at-risk youth, in preventing drug relapse among kids in juvenile jail, in social work on Native American Indian reservations, in war zones, and in the classroom.

“We know that mindfulness works, but we don’t know why,” said Rony Berger, a Ben Gurion University professor who brought mindfulness training to crisis areas in Africa (war), Indonesia (terrorism), Japan (nuclear fallout), Sri Lanka (tsunami), and China (earthquake). “We need to study the mechanisms of why mindfulness works.”

The audience included many teachers who were looking for ways to bring mindfulness practices into their classrooms.

Bret Ellerton, a preschool teacher at the New Discovery School in Seattle’s Roosevelt neighborhood, said he views mindfulness as one component of social-emotional learning. “It’s a whole-systems approach to how we’re creating well-being and joy and learning,” he said.

Rebecca McAlister, a second-grade teacher at Marysville K-8, a public school in Portland, Oregon, said that schools often seek academic results even though the kids aren’t emotionally ready to learn. “They have to be open, and that means supporting the whole child first,” she said.

For some teachers, the conference presented a welcome break, a time to refocus. “It gives you a chance to step back (to learn) and then to bring it back to our groups,” said Brian Eames, a teacher at the Strom Jewish Community Center on Mercer Island near Seattle.

For Ashley Eades, a psychology student at the University of Washington’s Tacoma campus, mindfulness seemed like a pleasant rediscovery. It feels natural and healthy, she said, to consciously acknowledge your feelings.

When she first learned of the word “mindfulness,” she thought, “What? There’s a name for this!

“I was so excited,” she said. “It’s like putting a name on something you already do.”

For Jacinda Dariotis, director of evaluation services at the University of Cincinnati, mindfulness is a way to get as much as possible out of your experiences. “If you are only partially present,” she said. “You’re not going to get out of life as much as you could otherwise.”

Despite the enthusiasm for mindfulness techniques, some presenters cautioned against seeing “mindfulness” as a cure-all.

“We’re in this sort of wonderful, beautiful place where we think mindfulness works for everything. It doesn’t,” said Molly Cevasco, a University of Washington professor who spoke on mindfulness for diverse populations. 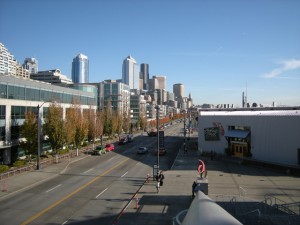 The view into Seattle’s downtown, from the Bell Harbor International Conference Center.

She said that some groups of people resist mindfulness techniques. Some Christians, for instance, reject centering exercises outright as an affront to their faith. And one mother, in the midst of a family crisis, called a breathing exercise stupid because it didn’t address her immediate need to get a job and keep her kids out of gangs.

Berger, the Tel Aviv professor, said it’s important to match the mindfulness technique with the situation. Meditation, for instance, can bring up flashbacks in people with post-traumatic stress disorder.

“If they’re not grounded enough, they’ll be freaking out,” he said. “You have got to be cautious.”

For some groups, though, mindfulness resonates particularly well. Renda Dionne Madrigal, clinical director of Indian Child and Family Services in Temecula, California, said mindfulness is akin to the world view of indigenous people.

“Mindfulness is a practice that helps with the process of decolonization, and the cultivation of keeping and revitalizing indigenous practices,” she said.

Melinda Caye, program manager for the Confederated Salish and Kootenai Tribes in Pablo, Montana, called mindfulness a “winner” with the young people she worked with.

They took to it naturally, she said, even asking if they could invent their own techniques. Of course, you can, she answered.

“This is just a tool,” she said. “You can put it in your pocket and take it with you, wherever you’re going to go.”

0
SHARES
Share
Posted Under: 2015, Dharma Education, Fall
About the Author: Bob Baumgartner
After working in small newspapers near Seattle, Bob Baumgartner moved to Taiwan, where he taught English, studied Chinese, and was the first foreigner to earn an MBA at Cheng Kung University, Tainan. He now works in testing at Microsoft for Wipro, an Indian multinational company. On the weekends, you might find him at the Seattle Meditation Center.