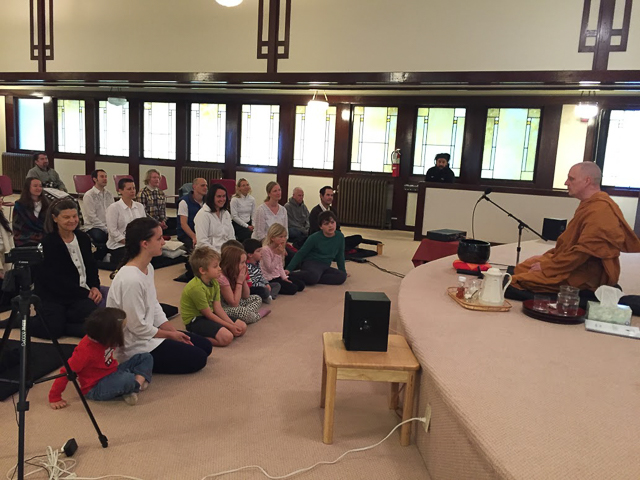 In the near-decade since the Great Recession began, we have seen the business landscape across the Pacific Northwest shift shapes from competition and individuation to space sharing and incubation. One might have seen a screen printer taking up residence in the corner of a coffee shop, an attorney renting a vacant office in a newspaper, or a graphic designer settled in a small grocery’s back room. 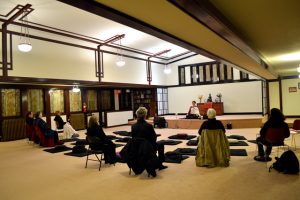 Samden Ling, a Tibetan practice group led by Jacqueline Mandell, has expanded since moving into the Portland Dhamma Center, owned by Portland Friends of the Dhamma.

So, too, has there been a trend toward religious groups of all denominations sharing, renting and offering space to each other. And while this trend is prominent now, it draws upon historical precedent and values dating back to the time of the Buddha.

One particular building in Portland – practically a character in its own story – has shared and rented space to many groups over its 25-year history. Today, the historic building in Southeast Portland is newly owned by Portland Friends of the Dhamma, a Theravada Thai Forest lay meditation center, founded in 2000.

Friends of the Dhamma now rents to three other Buddhist groups of various denominations:  Rinzai Zen group No-Rank Zendo; Thursday Night Sangha, which is in the Thich Nhat Hanh tradition; and the Tibetan group Samden Ling.

All are flourishing in the new-old space, which has been re-named Portland Dhamma Center.

Each group has been able to expand its base of members and volunteers and add or grow programs. For example, a fledgling family program at Friends of the Dhamma’s former center is now a dozen kids strong, with a paid caregiver. No-Rank Zendo now supports two evenings of activity at the Portland Dhamma Center, with plans to use a consultation room. 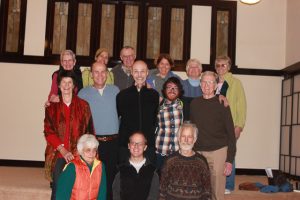 The Thursday Night Sangha, affiliated with Zen Buddhist teacher Thich Nhat Hahn, has now resided with Portland Friends of the Dhamma in three locations. The group was the first to sign on in the new building.

When Portland Friends of the Dhamma in 2013 started renting space in the building two days weekly, the structure had been owned by Dharma Rain Zen Center since 1991.

Circumstances were drawing the two groups together, because Friends of the Dhamma had recently lost its lease at a Methodist church in the Sellwood neighborhood, and had begun to consider buying a building.

Meanwhile Dharma Rain had purchased land to expand its operations and was considering selling the building where Friends of the Dhamma was renting. Trying on the building for size seemed like a good move. But it was very daunting.

The two-story building is a large Frank Lloyd Wright prairie-style church. Upstairs, hardwood flooring is bathed in thick white carpet and stained glass windows line each side of the dhamma hall. A stage at the front of the room serves as an altar and platform for speakers. 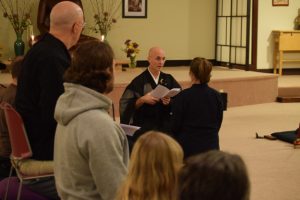 Reverend Rinzan Pechovnik leads the only Rinzai Zen group in Portland, at the Portland Dhamma Center.

A stairway leads down to a dining area and kitchen. Two storage areas book-end the space downstairs, and a carpeted gathering area serve as a sales point for Zen goods.

Within a year, community support made a purchase possible — with the contingency that space and time in the building would be rented out to like-minded organizations in order to meet a percentage of the financial obligations. After the purchase in April of 2014, Friends of the Dhamma explored all the different ways the building could be utilized — for yoga classes, support group meetings, and of course other sitting groups. An office was built in the basement for another source of income, as well as an office for Friends of the Dhamma’s spiritual director, Sakula Mary Reinard. An acupuncturist moved in quickly.

The three groups that today rent space in the building  each have a set evening or multiple evenings for their regular groups upstairs, and they each have three Saturdays per month for special guests and gatherings, which are calendared through Sakula. Groups can rent extra time and space as space is available. The altar stays as is, with speakers or groups leaders using it as needed. 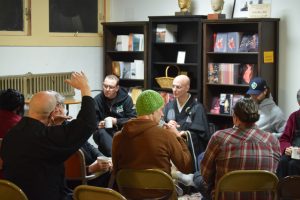 Groups utilize the dhamma hall upstairs, as well as the gathering space and library downstairs.

Different expressions of dhamma
At its previous location in the Methodist church, Portland Friends of the Dhamma had subleased offices to a naturopath, a writer and an artist — all with good results. They had also offered space on a free-will donation basis to the Thursday Night Sangha group associated with Zen teacher Thich Nhat Hanh.

Although financial obligations no longer allowed for only a free-will donation, the Thursday Night Sangha was the first to rent an evening in the new building. According to Sakula, the group  continues to offer dana above rent when they can, furthering the goodwill relationship the groups have always shared.

John Wadsworth, a leader from the Thursday Night Sangha, said the choice was clear when Portland Friends of the Dhamma made the transition to the new building.

“Our first choice was to go with you,” he said. “It’s a very good deal for what you are charging, and our contributions seem to be keeping up with that.”

Coincidentally, his background is in Vipassana (or insight practice), which is affiliated in the West with Theravada Buddhism and the Ajahn Chah tradition. This is the very tradition Portland Friends of the Dhamma is rooted in, and is the same tradition another tenant, Jacqueline Mandell, started out in several decades ago. 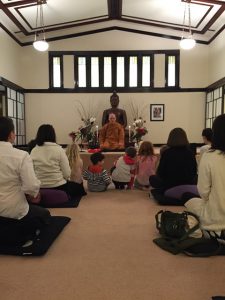 In a sad twist, Mandell came to rent from Portland Friends of the Dhamma after she sat next to Sakula at the memorial service for Roshi Kyogen Carlson, the abbot of Dharma Rain, who died shortly after the building sold. Mandell’s teacher had recently encouraged her to expand her group and look for a place to rent, and she found out about the possibility while speaking with Sakula.

Very quickly, Mandell’s group Samden Ling came on as a tenant. Since then Samden Ling has flourished, and she makes use of multiple Saturdays per year, beyond the three allotted to each group, for days of mindfulness. She has also split her weekly offering into one for anyone in the community and one for advanced Tibetan practitioners.

“The space is so well meditated that people feel really good about coming,” Mandell said. “The meditation hall is just beautiful. The fact that it’s used by other meditators kind of solidifies the feeling, and that feeling brings people more deeply into the practice when they enter.”

The most recent tenant has grown the fastest. Reverend Rinzan Pechovnik leads the only Rinzai Zen group in Portland, No-Rank Zendo, and the group quickly has expanded to two evenings. It’s also making use of a traditional Zen consultation and interview room that was established when Dharma Rain owned the building.

Like many others who practice there now, Rinzan sat in the center for seven years with the Zen Community of Oregon, when it was renting from Dharma Rain.

“Three or four of us practiced there previously. We love the space – we have always loved it,” said Rinzan. “Personally there’s a lot of joy in knowing there are different expressions of dharma in that space.” 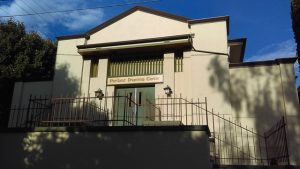 Following the teacher’s path
Like the other three Buddhist groups that have made Portland Dhamma Center home, Portland Friends of the Dhamma has been flourishing in the new space.

The group has grown its family program, Sunday Sila, into a dozen or so kids under the watch of a paid child-care attendant. This person is assisted by the daughter of a board member, who grew up in the fledging family program herself.

The spiritual director is no longer a volunteer position, and the board has enlisted the help of dozens to remodel and care for the building.

A large new Buddha from Thailand was promised to the community by its spiritual advisor, Luang Por Pasanno, abbot of Abhayagiri Buddhist Monastery in Redwood Valley, California. The statue arrived late last year, adding gravity to the space, and tying it directly to the Ajahn Chah lineage of Northeast Thailand.

Portland Friends of the Dhamma’s path – and the paths of all who practice at Portland Dhamma Center – mirror an ancient community spirit of kindness, friendship, clarity and the pursuit of true happiness through the teachings of the Buddha.

0
SHARES
Share
Posted Under: 2016, Sangha News, Summer
About the Author: Jessica Swanson
Jessica Swanson is a Pacific Northwest writer and editor. She has been a member of Portland Friends of the Dhamma since 2003, leading classes and practice groups throughout the year. She lives in Vancouver, Washington, with her husband and two small children.