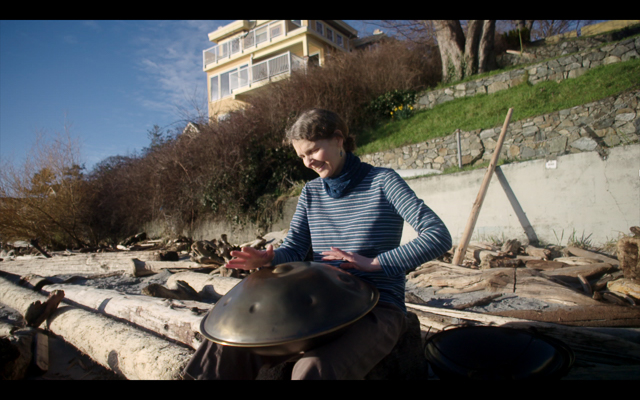 Storyteller Margo McLoughlin plays the Hang, a percussion instrument made in Switzerland, taken on a Victoria, B.C. beach.
Photos by: Sam McLoughlin

I fell in love with the dharma and with storytelling about the same time. For the last 25 years, the two have informed each other as practices and pathways in my life.

Most recently I’ve been focused on researching and telling stories of women in early Buddhism.

In 2015 I received a British Columbia Arts Council grant to put together a collection of the stories for publication. 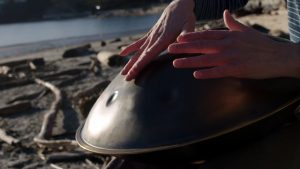 Hands bringing out the nuances of the Hang.

In 2012 I was artist-in-residence at the University of Victoria’s Centre for the Study of Religion in Society, where I began work on retelling these stories, crafting versions for oral performance.

I’ve based my work on a wealth of story material available in the Buddhist tradition. For instance the “Therigatha,” or “Verses of the Women Elders,” is a collection of beautiful poems by early Buddhist nuns. A commentary, written in the 5th century, includes short biographical accounts of these nuns. With the goal of creating a repertoire of new stories about these pioneers, I began to research the lives of women in ancient India, and in particular the first lay and monastic Buddhist women practitioners.

Though the source material is from another era, I believe these stories speak to a modern audience simply because they describe the human experience of love and friendship, desire and longing, the challenges of relationship and the truth of loss. In each story, the pivotal moment is one of insight and the gradual or sudden transformation that follows. 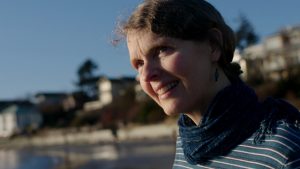 McLoughlin deeply believes in the power of story.

In March I presented three stories of early Buddhist women, during an evening at Seattle Insight Meditation Society. Here’s a link to an audio recording of that talk.

“Little Hunchback” tells the story of Khujjuttara, a young slave with perfect recall, who hears the Buddha give a teaching on generosity. “Queen Mallika” recounts the tale of a young woman who becomes the chief consort of King Pasenadi, and through whom the king encounters the teachings of the Buddha. “Khema Visits Veluvana” is the story of Queen Khema and her sudden awakening.

It’s helpful to consider what connects us, across the centuries, to these early Buddhist women. In following the narrative of specific women’s lives, we may be initially aware of the differences between their circumstances and our own. 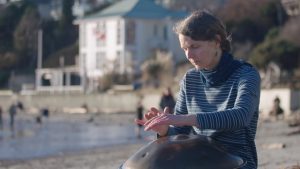 There’s music in telling a story.

The world of ancient India is far from our world, in time and space. Being a woman in that era was to know oneself primarily in relationship to others, as daughter, wife, lover, and mother. Western women in the twenty-first century have much greater opportunities to see themselves in other terms, as creators of their own lives, regardless of their position within a family structure.

But while the outer architecture of early Buddhist women’s lives is significantly different from that of modern women in the West, what we know (and what we can guess) of their inner lives is not that different.  The joy and delight of sense perception, the discovery of faith, moments of liberating insight—all of these are shared experiences that create a bridge between past and present.

By exploring the inner life of women at the time of the Buddha, I hope to provide modern readers and listeners with new ways of encountering the complexity of their own lives. By expanding my repertoire to include stories of girls and women, I hope to remind all my listeners that we have much to celebrate and learn from women’s experience. 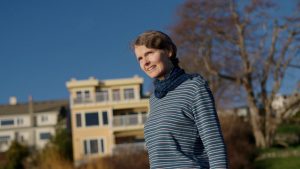 Much of McLoughlin’s work is focused on early women in Buddhism.

My own story of falling in love with the narrative material in the Buddhist tradition began with a simple intention — to translate from Pali and craft my own versions of the Jataka tales, the stories of the Buddha’s previous lives.

Almost 20 years ago I was serving as a cook at Insight Meditation Society in Barre, Massachusetts. One weekend I took an introductory course in Pali, the language of the early Buddhist teachings. My instructor was Andrew Olendzski, then resident scholar and director at the Barre Center for Buddhist Studies. I had heard teacher Steve Smith tell some of the Jataka tales, and I was curious about their sources. I wanted to create versions that would be accessible to modern audiences while also evoking the world of ancient India.

In many of the stories I have developed since my first painstaking translations, I include Pali words and phrases, inviting my listeners to repeat with me the flowing, rhythmical sounds of the language. 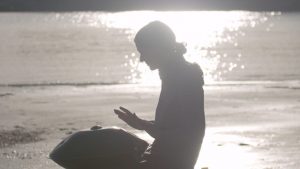 Much remains to be done.

Over the years of translating, performing and telling the Jataka tales, it became apparent to me that the stories rarely featured any women in significant roles. This realization launched my interest in developing stories of Buddhist women.

Since 2005 I have made my home on Vancouver Island, on the west coast of Canada. I returned to British Columbia after a long sojourn in Massachusetts, first at IMS, then as a student at the Harvard Divinity School, and later as a chaplain visiting patients. All along the way, dharma practice and storytelling have woven themselves into my work and my life. Meditation opens the space for a fully embodied experience of storytelling. Stories offer a way of expressing my dedication to the dharma.

Stories shape our world-view. They remind us where we come from and who we can be in this complex, changing world. But the dominant narratives in a culture often leave out large numbers of people. The result is alienation, even internalized racism, and often a feeling of confusion about identity and belonging.

It matters what stories we tell. It matters how we tell them. Every medium (from print-media to film or dance) has its particular magic and potential.

As a storyteller I believe in the medium of oral storytelling, where the magic is felt in the unrepeatable and unique transmission that occurs when teller and audience come together.

0
SHARES
Share
Posted Under: 2016, Dharma Healing, Arts, Summer
About the Author: Margo McLoughlin
Margo McLoughlin is a storyteller, writer and teacher in Victoria, British Columbia. She practices and teaches in the insight tradition of Theravada Buddhism. A graduate of Harvard Divinity School, Margo is also a community dharma leader, offering classes and non-residential retreats on Vancouver Island and neighboring communities. A new passion is teaching mindfulness to children through storytelling.