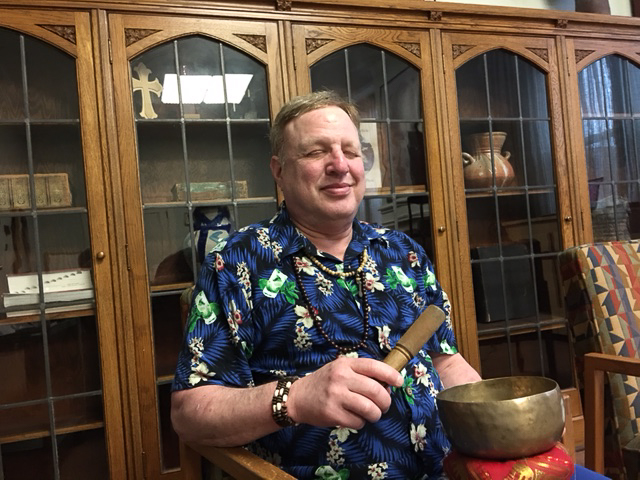 Seattle Freedom Project’s monthly Mindfulness Circle has been re-started by Rich Blick, a former convict who is working to give to others what he received from the dharma.

The Mindfulness Circle and discussion group now meets 6 p.m. to 8 p.m. on the 4th Wednesday of each month, at the University Christian Church in Seattle. This is due to the efforts and generosity of Rich Blick, who learned these practices while he himself was in prison. 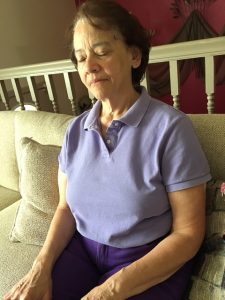 Mindfulness practice has become a way of life for Blick.  We are grateful for his willingness to lead this group.  Freedom Project values any ways that community can be nurtured and connection made.

Seattle Freedom Project began 15 years ago with the mission to deepen connection, empathy and compassion among women and men in Washington state prisons.  This nonprofit agency uses the strategies of Nonviolent Communication and mindfulness classes and workshops.

These classes are all voluntary and are taught by cohorts of outside mentors and inside (prison) mentors. Each week cohorts of about 25 people gather in prison classrooms in Clallam Bay, Airway Heights, Monroe and Purdy, to study the work of Marshall Rosenberg’s  Nonviolent Communication, or to practice mindfulness based on “The Path of Freedom,” a text co-authored by Fleet Maul and Kate Crisp. 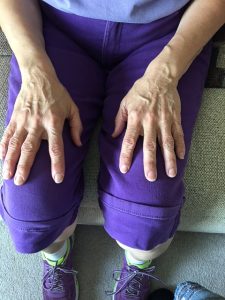 Hands reflect the deep relaxation that comes from sitting.

We underscore that both Mindfulness and Nonviolent Communication are practices, which need to be renewed and deepened daily.

Post-prison individuals are invited to participate in monthly circles sponsored by Freedom Project to deepen both of these practices.  It is a safe place for individuals who have been incarcerated to rest in a stigma-free environment with volunteers, family members and friends.  It further deepens connection and community.

Why these two gatherings?  The root of both of these practices is intentionality.  Through focusing on being, and being in touch with the present, inner difficulties like stigmas, guilt, un-forgiveness and negative self-talk can be laid to rest.  Our needs can be held and honored.  Any reader is welcome to attend.  Please contact Freedom Project at this email.

Interviewer:  What brought you to your mindfulness practice?

Rick:  An invitation initially and then I discovered that here was a place and an opportunity where I could be present with myself.  Further, over time I began to realize that these classes gave me opportunities to get out of my self-centered personality and to be more understanding and thus open up my compassion. 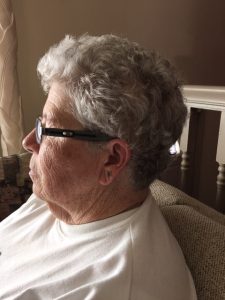 It also moved me outside and beyond the cycle of judgment.  In prison I felt stigmatized by the crime I had committed and felt ‘less than.’  Once I started meditating I began to bask in the presence of volunteers who held no judgement about what had been, but simply accepted me and others just as we were in the present moment. There was so much unconditional acceptance that I began to believe in myself once again.  I knew then I could change and be a better person. I was connected.

Interviewer:  Why again offer circles on mindfulness?
Rick:  I knew I wanted to give back to Freedom Project.  I had found volunteering there life-giving and I told myself, ‘Let’s do this again.’  I had previously provided Mindfulness Circles at the Seattle Area Support Group house on Capitol Hill.  Folks there appeared to like it.

As I deepened my practice of sitting and living more mindfully, I realized that I wanted to become a certified mindfulness facilitator.  There are some pre-requisites that I need for the UCLA Mindfulness Certification Program.  One of these is to lead mindfulness groups.

Freedom Project was a natural fit for resurrecting the mindfulness circles which had previously been hosted by Cathy (Genko) Blackman, who now attends whenever her schedule permits. 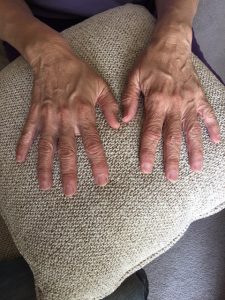 Interviewer:  How does leading mindfulness circles help your own practice?
Rick:  There is something about sitting in a circle and the collective energy of that circle that is fulfilling.  It centers me to be part of something focused and quietly caring.  As a facilitator it is my responsibility to keep the energy focused, flowing.  This strengthens my commitment to my practice and deepens my presence with others.

Interviewer: What would you say to someone who has never practiced mindfulness but is curious?
Rick:  First I would encourage a person to give it a chance.  Go there open and willing to ask some questions.  I would ask that individual, ‘are you willing to try something new?’

Not everyone can sit still.  We have as a society become so over-focused on humans doing rather than on human beings.  The point is to not force yourself.  Sit, listen, and close your eyes. Listen to whatever comes to you and be with it, just be in the moment. It is also good to not expect yourself to do a 20-minute-sit the first time.  Gradually move into it.

0
SHARES
Share
Posted Under: 2016, Prison Dharma, Summer
About the Author: KC Young and Rich Blick
KC Young is the current executive director of Freedom Project. When asked about her work she said, "The transformative work of Freedom Project invites each of us to move outside of the prisons that lock us in. I love this work!”

Rich Blick is a longtime friend and volunteer of Freedom Project. He was introduced to Freedom Project in 2009 while in the Twin Rivers Unit at the Monroe Correctional Center in Washington state. From that introduction he spent the next two years taking all of classes Freedom Project had to offer. He especially found focus with the classes on mindfulness.

Upon his release from the Department of Corrections in 2011, Blick began to volunteer at the Freedom Project office and to participate in the monthly circles and the mindfulness circles.