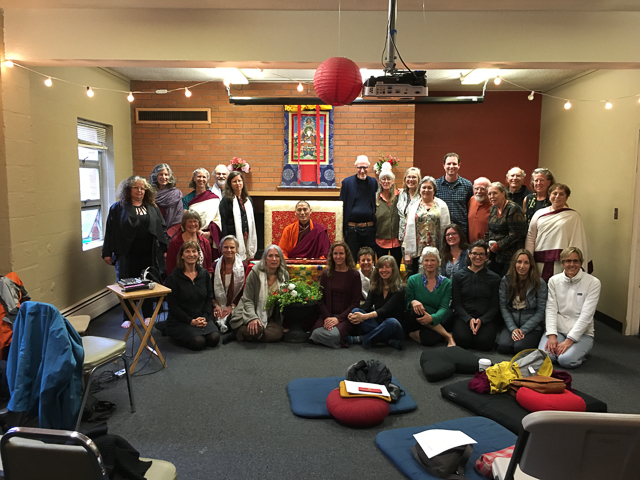 Collaboration brought the dharma to this happy group of retreatants.
Photos by: Cutty Hyde, Jacqueline Mandell

Editor’s note: This unique story tells how three Portland people – Cutty Hyde , Diane Hyde and Jacqueline Mandell – collaborated to bring Dza Kilung Rinpoche to Portland to talk about his newest book. Diane and Jacqueline share their experiences, and the story arises from that sharing.

Diane: Last fall an idea was born. Dza Kilung Rinpoche had just written a book, “The Relaxed Mind,” published by Shambala Publications. At his annual Dzogchen retreat last October, I was part of a group that formed to help facilitate a book tour. So, I began looking into Portland venues for a talk and book-signing.

Jacqueline: Last fall I met a friend at the Chinese Garden. We were talking aboutwhat topics would serve our dharma community. My friend asked, “What about devotion in Dzogchen?” 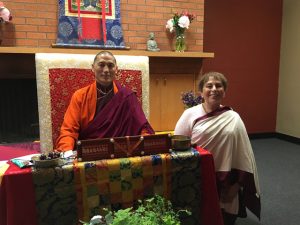 Jacqueline Mandell and Dza Kilung Rinpoche at conclusion of retreat.

This is something seldom taught, yet we thought it something senior dharma students with a familiarity with Dzogchen would appreciate. I realized Kilung Rinpoche would be the perfect teacher for this, so I sent an email to RInpoche’s students, asking them how to request this teaching.

Diane: Jacqueline contacted us in early January and we set up a meeting to discuss whether we might coordinate a teaching weekend, and if so, what that might look like. While we had never worked together before, we had all done a lot of previous organizing of dharma events. We were struck with the synchronicity of our shared intentions. We also recognized that both our sanghas have the same Tibetan Buddhist lineage, the Longchen Nyigtik. So, we decided to move forward.

Jacqueline: There was a lot to do! We needed to look at the tasks involved in setting up a daylong retreat and a book-reading event. The first item of business was finding a venue for the daylong retreat. After lining up our venues and dates, I would need to coordinate with Ticket Tomato.com, the online registration website. I suggested using the Tibetan throne that has been entrusted to me from the Sakya community, while Cutty would arrange for the sound system. Where would Rinpoche stay? What about his meals, his transportation? What would a schedule for the two events look like? What about publicity, flyers? Most importantly, would Rinpoche accept our invitation? We heard back from Rinpoche – yes! He had accepted our invitation. Now it was time to get to work. 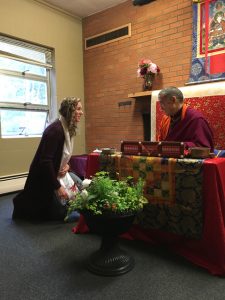 Diane: At our initial meeting – the only face-to-face meeting we would have during this months’ long process, all our ensuing communication was online – we also took the time to discuss and divvy up responsibilities and tasks. I of course would take on the bookstore event. Cutty and I volunteered to host Rinpoche in our home, as we had done before. I contacted the events coordinator at New Renaissance Bookshop, the obvious choice in Portland for a Buddhist event. Rinpoche had spoken there before, and New Renaissance welcomed him back. Meanwhile, we contacted several possible venues in search of a place for the day-long teaching.

Jacqueline: We decided on a centrally located community center, Southeast Uplift. All of us had been there for teachings with Anam Thubten Rinpoche the year before. Once we had the dates set and the venues chosen, it was time to invite the community. I made the flyer for both events, which I then posted on Samden Ling’s website and Facebook page. Diane and Cutty distributed the flyers to different dharma centers in Portland and to New Renaissance, and posted the flyer on the Pema Kilaya website and Facebook page.

Diane: Before we knew it, our event was just days away. Time to get busy! I contacted the events coordinator at New Renaissance, to make sure all was in place, including a sound system and room setup. We discussed the arrangements for the book sales and the book signing after Rinpoche’s talk.

Meanwhile, on the home front, I prepared Rinpoche’s guest quarters and did meal planning for him and grocery shopping. Cutty arranged with Jacqueline to pick up the very large, very elaborate throne – one that needed to be deconstructed to be moved from the Samden Ling storage locker. I looked through my supplies of dharma materials, including shrine cloths, Buddhist statues, and katas, to help transform a meeting room into a Tibetan Buddhist meditation hall. 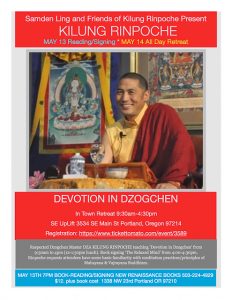 Jacqueline: A few days before the event I met Cutty at the storage locker to help load the throne into his truck. I shopped, looking for just the right flowers to go with the Tibetan throne. Open peonies seem to be perfect, along with a large urn filled with an array of plants and flowers. Monitoring the ticketing was quite simple. A few days before the event I sent out an email notice to those who had signed up, letting them know the day’s schedule and the protocol.

Diane: Friday, May 13th (yes, it was Friday the 13th – a most auspicious day), I eagerly awaited Rinpoche’s arrival at our home. Jeanne Lepisto, Pema Kilaya’s director, drove Rinpoche down from his home on Whidbey Island, along with two other sangha members (and the sound system for Saturday’s event). I welcomed Rinpoche and helped him get settled.

Meanwhile, Cutty and other sangha members who had offered to help with set up headed down to Southeast Uplift. There, they met Jacqueline.

Everyone joined in to move furniture and set up the sound system. Cutty reconstructed the throne, draped brocades, and hung a beautiful thangka over the fireplace, while Jacqueline arranged the flowers. We set up two tables, one for registration and “The Relaxed Mind” book sales, the other for Samden Ling’s silent auction, with proceeds going to fund monasteries, shedras and nunneries in Tibet.

Back at home, I prepared Rinpoche’s dinner, and set out a big pot of soup, salad and bread for our other dharma guests. After dinner, we all headed over to New Renaissance. Upon arriving at New Renaissance Bookstore for the 7 p.m. event, we were pleased to see a large gathering, including the owners of the bookshop. Rinpoche gave a generous overview of “The Relaxed Mind,” interspersed with guided meditations. Afterwards, he invited questions, to which he provided thoughtful answers. He then met with folks and signed copies of their books. 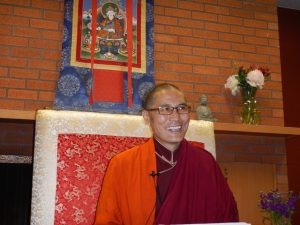 Jacqueline: Saturday May 14, after everyone was settled on zafus and chairs, I introduced and welcomed Kilung Rinpoche to Portland and told him how honored we were that he had come here to teach us. While introducing RInpoche, I shared with the group how these teachings came to be – how it was that these two sanghas came to work together, beginning with a conversation with a senior dharma student at the Chinese Garden teahouse. I was so grateful to see everyone in attendance, especially my dharma brother who had inspired these teachings.

Diane: At lunchtime, Jacqueline, Cutty and I took Rinpoche to lunch at a local Thai restaurant. We invited a board member of Samden Ling to join us, along with the director of Pema Kilaya.

It was wonderful to have the opportunity to come together as two sanghas, and to celebrate the culmination of our hard work and offering to the community. After the close of the profound afternoon teachings, those in attendance felt like sangha.

After the traditional offering of dana and katas to Rinpoche, we gathered for group photos. Afterward, Rinpoche kindly offered to stay and sign books and individually meet the retreatants.

Everyone left with that certain dharma glow that comes from the blessings of the lineage. Jacqueline, Cutty and I all felt that our shared vision had been fulfilled.

0
SHARES
Share
Posted Under: 2016, Sangha News, Summer
About the Author: Jacqueline Mandell, Diane Hyde and Cutty Hyde
Jacqueline Mandell is a founding teacher of Samden Ling and currently teaches weekly classes in sitting practice and Longchen Nyingthig Ngndro.. She is the outgoing Executive Director after 16 years. Samden Ling was founded by Adzom Rinpoche in 2000. Diane Hyde practices in the Longchen Nyingtik tradition, which is a lineage in the Nyingma school of Tibetan Buddhism. She studied with Sogyal Rinpoche, Lama Tsultrim Allione of Tara Mandala, Namkhai Norbu prior to meeting Kilung Rinpoche at a three-week Dzogchen 2006. She has been studying with Kilung Rinpoche since.

Cutty Hyde practices in the Longchen Nyingtik tradition. He began his spiritual exploration in the 1970s with Swami Satchadananda, and then went on to study with Hindu yogi Swami Rama. 1979 Cutty and Diane opened a small new-age book store, Unison Books, in San Diego. In 1984, he also attended his first retreat with Sogyal Rinpoche, and went on to study with him. He studied with Lama Tsultrim Allione and Namkhai Norbu; his main Tibetan Buddhist teacher was Lama Surya Das before he became a student of Kilung Rinpoche in 2007.