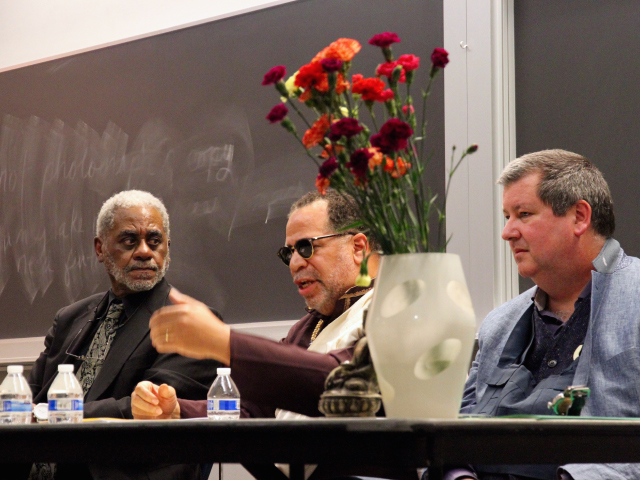 Two of the best-known and celebrated African American male Buddhist practitioners say yes. They shared their views on the relevance and urgency of BuddhaDharma for black Americans, before a packed house at Seattle University March 8. 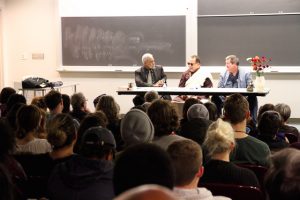 Dr. Charles Johnson and Lama Choyin Rangdrol agreed on many facets of the dharma.

Lama Choyin Rangdrol opened and closed the unforgettable evening with short guided meditations. In a very real sense, the audience could detect the dharma wheel turning in unprecedented new directions.

Dr. Charles Johnson, National Book Award recipient and professor emeritus at the University of Washington, has provocatively described BuddhaDharma as “a matter of life and death for black Americans.” He has insisted that any discussion of ethics needs to include BuddhaDharma.

Rangdrol reflected in a 2003 interview: “When I discovered that it was possible to avoid becoming ensnared in the mentality of an angry black man by applying Buddhism, I felt I had found a great treasure not just for me but also for my people. I could immediately see the potential for resonance in millions of black people’s minds. I could see how this could reverberate down to the core of the hurt so many of us carry, and that one could emerge from Buddhist study and practice healed.” 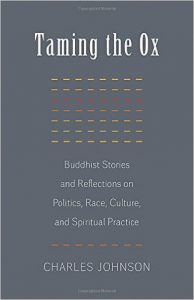 The two men shared these remarkable and provocative positions during an event sponsored by the Seattle University EcoSangha, partnering with the university’s Department of Global African Studies.

The event, hosted by Dr. Tetsuzen Jason M. Wirth, was entitled “Buddhism in Black America: A Global Perspective.” It allowed these two speakers, prompted by questions first from the host and then from the audience, to impart their teachings.

Charles Johnson calls race one of our most “toxic” illusions, one of the most poisonous manifestations of the three poisons.

Lama Rangdrol has said that, “Despite all that has happened in America between African-Americans and European-Americans, the answer for the Buddhist community, for America, and for peace on Earth, is for the descendants of slaves and slave-owners to use Buddhism to become one.”

The speakers shared concrete practices and steps to help us envision and actualize a more peaceful and compassionate experience of our deep unity with all humans, indeed, with all beings. 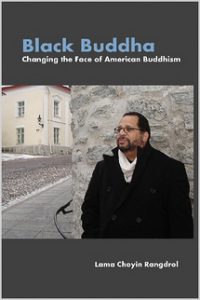 In so doing, they spoke to issues of grave concern to all of us, but which are felt with special force, urgency, and poignancy by Black America. These include The Black Lives Matter Movement, The Rise of Donald Trump and Trumpism, and the mass incarceration of black Americans, especially black males.

Dr. Charles Johnson is a University of Washington professor emeritus and a celebrated novelist, essayist, literary scholar, short-story writer, cartoonist and illustrator, screen-and-teleplay writer, and philosopher. A MacArthur fellow, Johnson received an American Academy of Arts and Letters Award for Literature and a National Book Award for his novel “Middle Passage.”

He recently published “Taming the Ox: Buddhist Stories,” and “Reflections on Politics, Race, Culture, and Spiritual Practice.” His other celebrated novels include “Ox Herding Tale” (1982), and “Dreamer” (1998).

Johnson’s BuddhaDharma writings also include the classic, “Turning the Wheel: Essays on Buddhism and Writing” (2003). 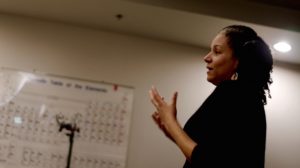 An audience member asks a question regarding Buddhism as a way of understanding suffering as an American.

Johnson is also a great teacher of what he felicitously dubbed “epistemological humility,” and during the dialogue he demonstrated both what it means to speak well and to listen carefully, even selflessly.

Lama Choyin Rangdrol, who has recently moved to the greater Seattle area, is a Vajrayana Buddhist teacher in the ancient Nyingma tradition of Tibetan Buddhism. He has taught extensively in Asia and Europe, including some remarkable work with the Dalit people of India, otherwise known as “untouchables.”

Rangdrol’s 2008 film “Festival Canceled Due To Heavy Rain,” which chronicled his pilgrimage to Cambodia’s Angkor monuments, received the Accolade Award for Filmmaking Excellence from the Hawaii International Film Festival. The film also revisits the violence and unrest surrounding the American civil rights and anti-war movements, from the black men on the front lines in Vietnam to the rise of urban gangs and the FBI-sanctioned war against them. 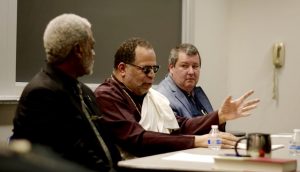 Lama Choyin Rangdrol responding to a question about the dharma mind, and bringing thinking to conversations about race in America.

For those interested in viewing a 90-minute video recording or reading a transcript of this provocative evening, it can be found (after July 1) on the Seattle University EcoSangha website under the EcoSangha “Out and About” tab. Like the event itself, access to the recording or the transcript is free and open to the public.

Lama Rangdrol will soon be teaching new classes and receiving new students. He will lead a meditation study on the African American Experience every Sunday at noon at the Northwest African American Museum, 2300 S. Massachusetts Street in Seattle.

220
SHARES
Share
Posted Under: 2016, Compassionate Action, Summer
About the Author: Rev. Dr. Tetsuzen Jason M. Wirth
Rev. Dr. Tetsuzen Jason M. Wirth is professor of philosophy at Seattle University and until the end of June was the 2014-2016 Pigott-McCone Chair of the Humanities. He was ordained in the Soto Zen tradition and is co-director of the Seattle University EcoSangha (www.ecosangha.net), which he founded in 2006.