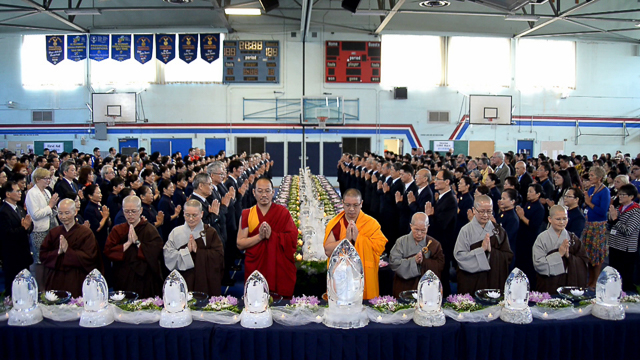 Monastics from around British Columbia gathered on May 8, to celebrate Buddha’s birthday and the 50th anniversary of Tzu Chi Foundation.
Photos: Courtesy of Tzu Chi Canada

Tzu Chi Foundation Canada celebrated three milestones May 8: its 24th anniversary in Canada, the 50th anniversary of its parent organization, and Buddha’s birthday.

From its origins in a remote village on the east coast of Taiwan in 1996, Tzu Chi Foundation has grown to operate chapters in over 50 countries. It reportedly is the largest Asian charitable organization in the world, delivering services in the eight broad categories of charity, medicine, education, humanities, bone marrow transplants, international relief, environmental conservation, and community services.

Tzu Chi Foundation Canada (Tzu Chi Canada) was founded in 1992 in Vancouver, British Columbia. When Tzu Chi Canada CEO Gary Ho sought advice from Dharma Master Cheng Yen about how new immigrants to Canada should contribute, she told him that immigrants, stepping on Canadian soil and enjoying the fruit cultivated by the hard work of local Canadians, should contribute to the society and serve the local communities. 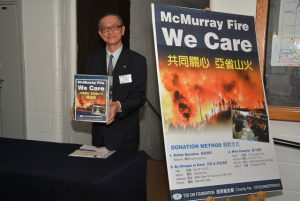 For the last 24 years Tzu Chi Canada has been following this advice and continuously expanding its services to many communities across Canada. The organization now operates chapters or offices in Vancouver, Victoria, Calgary, Edmonton, Mississauga, Toronto, Ottawa and Montreal.

Tzu Chi also is active in the western Washington state, with a center in Seattle and another in Kirkland.

Before the celebration of Buddha’s birthday began, dignitaries from federal and provincial governments, and from six municipal governments, delivered greetings from their leaders. As a group they proclaimed May 8, 2016, Tzu Chi Day.

CEO Ho, in his remarks, appealed to the attendees to reach out to assist the victims of the wild forest fire in Fort McMurray in the province of Alberta (about 1,000 miles northeast of Vancouver). By May 8 the fire had spread over an area of hundreds of square miles, forcing about 100,000 people to evacuate.

Tzu Chi Canada considers itself morally obligated to reach out to its fellow Canadians in Alberta.  Typical of Tzu Chi tradition Tzu Chi Canada will launch a nationwide fund-raising drive, and its members will directly deliver the relief materials to affected individuals.

As international relief is one of Tzu Chi Foundation’s primary missions, Tzu Chi Canada members also have joined their fellow Tzu Chi members delivering relief to victims of other major disasters. These have included the 2008 Sichuan, China earthquake; the 2010 Haiti earthquake; and Hurricane Sandy in New York in 2012. 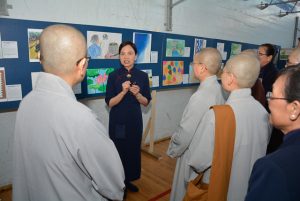 At the center of the May 8 celebration was a ritual called “Buddha Bathing.” In this traditional celebration of Buddha’s birthday, typically the devotee takes a scoop of water from a fountain and pours it over a Buddha’s statue.

The backdrop for the main event—the Buddha bathing—was simple but elegant. The “altar” was a long table in the middle of the gym, draped in velvet blue cloth. On the table were 32 crystal Buddha statues, with a crystal dish with clean water in front of each Buddha statue, and a dish of fresh flowers on the side.

This year eight monastic masters from other Vancouver-area Buddhist also joined the celebration. 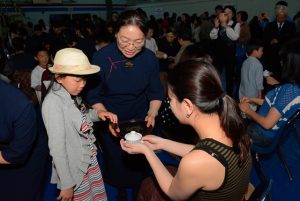 A child offers tea to her mother, during the tea offering ceremony.

The ceremony itself was elegantly choreographed, with Tzu Chi volunteers leading invited guests and dignitaries, and others attending. The ceremony was simple and elegant, performed in a quasi-military style.

Activities in the afternoon focused mainly on celebrating Mother’s Day, with little children serving tea to their mothers and washing their mothers’ feet. It was such a touching moment that it brought many mothers to tears, and further enhanced the bonding between mothers and their kids.

There were also lots of fun games designed to get all members of the family involved. The games helped build closer relationships between parents and kids.

Another important component of the celebration was a children’s drawing competition, divided into three categories according to the participants’ ages. The theme was love; within families, nature, and communities.

Drawings from more than 100 entrants made it the final round of the contest. Many attendees were very appreciative of the imaginations and talents of these very young artists. 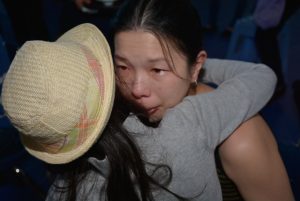 A mom in tears, after receiving a gift of tea from her child.

Organizers chose May 8 for the celebration due to a confluence of factors. Master Cheng created the foundation in the latter part in the month of April, which corresponds to the April birthdate of the Buddha. Given Tzu Chi’s strong emphasis on family values and respecting parents, particularly mothers, the organization scheduled the triple celebration for the second Sunday of May, which also is Mother’s Day.

The celebrants got to experience impermanence first hand, due to the high winds on May 8.

The strong winds caused a power stoppage to a large part of Metro Vancouver, including the school where Tzu Chi Canada was having its triple celebration, and in the midst of the Buddha-bathing ceremony. Nevertheless, the volunteers are so well-trained that despite the blackout the singing continued and the ceremony was concluded without a hitch, and everyone thoroughly enjoyed the program.

0
SHARES
Share
Posted Under: 2016, Dharma In Canada, Summer
About the Author: Rene Li
Rene Li is a volunteer at Tzu Chi Canada, who joined the organization in 2005. He currently functions as Tzu Chi’s representative to British Columbia provincial Emergency Social Services (ESS) program. He works in the banking industry, and currently resides in metro Vancouver. By the time this story was posted, Li had just returned from helping Tzu Chi members distribute relief supplies to evacuees impacted by the Fort McMurray wild fire.