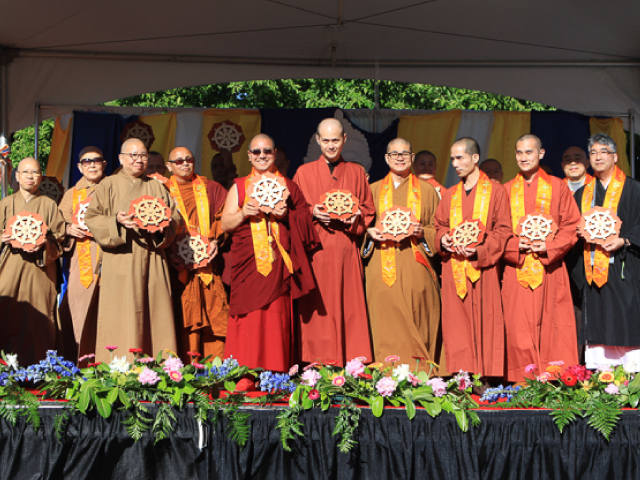 Buddhist leaders from around Western Canada warmly collaborated during the festival.
Photos by: Chloë Lai

The second annual B.C. Buddhist Festival in Vancouver, British Columbia, has grown enormously since its first iteration in 2015.

On May 29 the event brought back familiar elements including the Buddha bathing, dharma expo and cultural performances. It also made a few notable additions: an activity corner for children, a drop-in meditation class and, perhaps most importantly, a dharma conference. 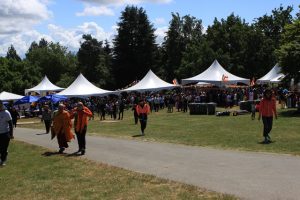 People came from around the region to attend the festival.

I visited Tsengdok Rinpoche, the festival founder and committee chair, a week before the festival to speak with him about the significance of this conference.

Tsengdok Monastery is an unassuming two-story building tucked away on a tree-lined street at the edge of South Granville, an area of Vancouver. I was welcomed into the prayer hall by Tsengdok Rinpoche and his interpreter, Asanna Lin.

Lin explained that the B.C. Buddhist Festival had four main goals: to raise awareness of Buddhism; to engage in public outreach to the Western community and second-generation Canadians; to build meaningful relationships between the different Buddhist traditions in British Columbia; and to promote world peace. 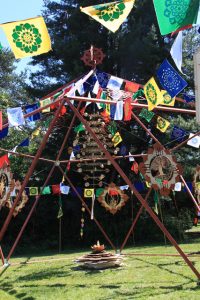 Sharing the Buddha’s teachings is second nature to Tsengdok Rinpoche, who has visited countries including Nepal, Thailand, Singapore and Sri Lanka in order to do just that. He has also continually engaged with leaders from the Christian, Muslim and First Nations communities. It’s hard to imagine anyone more well-prepared for the task of uniting multiple traditions in a single festival.

“To bring world harmony is [done] not only by saying it or believing it. We actually need to do it through our actions,” Rinpoche said. The dharma conference provided an unprecedented platform for planning these actions.

A week later I joined thousands of other festival-goers at Queen Elizabeth Park in Vancouver.

Nestled in its beautiful new outdoor setting, the festival area stretched between the sprawling rose garden and the Bloedel Conservatory. It was a lovely place to celebrate Vesak, a day that marks the birth, enlightenment and death of Gautama Buddha. Five hundred volunteers, almost double the number present last year, welcomed guests with warm smiles. 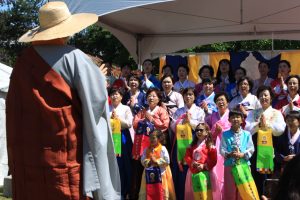 Like last year, the festival opened with blessings from both First Nations leaders and from Buddhist monastics, followed by the ceremonial bathing of the Buddha.

At 2:30 p.m., after a mindfulness meditation session led by Venerable Sik Yin Kit of the Po Lam Buddhist Association, it was time for the dharma conference.

I made my way past the dharma expo, through the aromatic vegetarian food stalls, and up the grassy hill towards the Celebration Pavilion. The pavilion was in a gazebo whose colorful walls feature thousands of delicate perforations that allowed both sunlight and a gentle breeze to flow through the space. It was a space commonly used for weddings, which seemed appropriate given Tsengdok Rinpoche’s intention of marrying multiple communities in long-lasting partnership.

A great gathering of the dharma 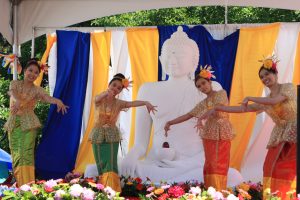 Venerable Tian Wen from the Tung Lin Kok Yuen Canada Society opened the discussion, by recounting the story of how the Buddha’s teachings were sought after by disciples from different castes, each of whom spoke their own language. He described how the Buddha explained to the Brahmins, the caste traditionally recognized as priests and teachers, that his teachings should not be limited to a single language but should be made accessible to all. Unity across diversity, Tung Lin explained, was built into the original teachings.

The first question to be explored was the best way to establish more harmonious relationships between the different Buddhist communities.

Tsengdok Rinpoche pointed out that this is an essential first step. “If we are not able to do such a thing ourselves,” he said, “Then anything we project to do in the community won’t bear much fruit.” 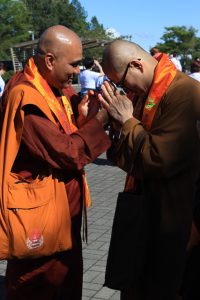 Leaders wishing to offer a response raised their hands in order to receive the microphone. Since not all speakers identified themselves prior to speaking, it was not always possible to know which tradition’s point of view they were representing.

Venerable Vipulasiri of Theravadin Sri Lanka spoke about Dana-Sila-Bhavana (sharing, discipline and meditation), reminding his colleagues that although their languages and forms of practice might be different, they shared the same precepts.

Another speaker suggested that this united sangha, or community, move forward with the six principles of harmony in mind. These principles are: sharing the same views or goals; abiding by the same precepts; living and practicing together harmoniously; speaking without conflict; experiencing the inner peace and happiness from practicing together harmoniously; and sharing of benefits.

In a particularly beautiful metaphor, the diverse Buddhist communities were likened to a field of flowers. Their petals might be of different shapes and colours, but each belonged to the same field, had its own beauty and contributed to the overall effect in its own way.

The next question was how to create more opportunities to have cultural interactions with the general public, in order to promote Buddhism. 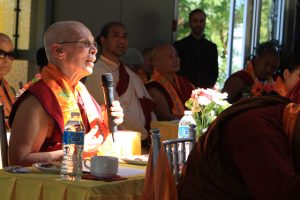 One young monastic studying in Florida shared his approach, which was to found a meditation club at Seminole State College where he was a student. In order to avoid conflict with Western religions, his weekly teachings were done in a formless way, using no sacred objects.  He also made his meditation sessions more accessible by using Western terms to express the Buddhist concepts.

Tsunma Puntsok Chodron, a Western nun from Gawa Ling Buddhist Society, offered an anecdote from her past outreach experience on a Navajo reservation in New Mexico that validated this gradual approach. She explained that the Navajo had two classifications of rain: male and female. Male rain was heavy, storming down mightily and washing everything away. Female rain, on the other hand, fell gently over a longer period of time and nourished the plants without provoking resistance.

“One drop at a time will fill the ocean,” she said. 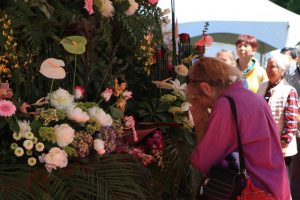 An attendee bows after bathing the Buddha.

Once the conference had come to an end, Venerable Tian Wen led the assembled monastics in a Buddhist prayer for peace.

After a group photo at the fountains, everyone walked back down to the main stage together. Tsengdok Rinpoche thanked volunteers, dharma expo stallholders and committee members with decorative wooden karma wheels designed by Ari Lazer, who had also created the magnificent prayer sculpture from which attendees’ wishes were hung on ribbons. Rinpoche also presented donations to Vancouver General Hospital and BC Children’s Hospital.

The addition of the conference gave the festival an inspiring sense of forward momentum that propelled me through the following days. I look forward to seeing what comes of the discussions that I witnessed, as B.C.’s Buddhist sangha grows.

0
SHARES
Share
Posted Under: 2016, Dharma In Canada, Summer
About the Author: Chloë Lai
Chloë Lai is writer and editor working in Vancouver, B.C. Although her main practice for the past three years has been Zen meditation, she also enjoys learning about other traditions. On Tuesday afternoons, she can be found in deep conversation with the ducks at Stanley Park.