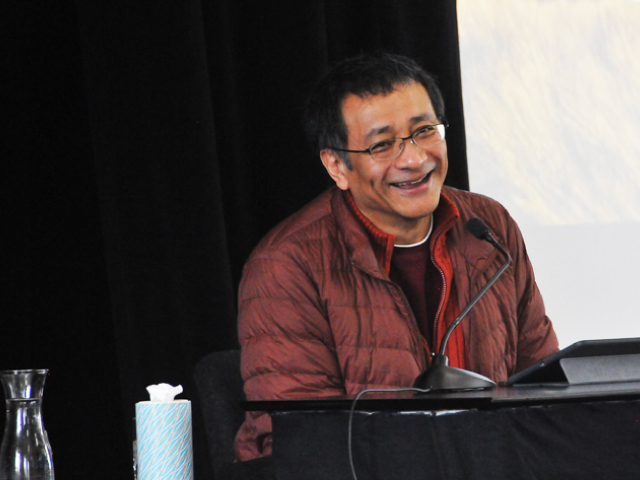 Ponlop Rinpoche laughs as he teaches on his new book, “Emotional Rescue,” during a recent weekend event at Nalanda West in Seattle.
Photos by: Rysiek Frackiewicz , Nirzhar Pradhan

Dzogchen Ponlop Rinpoche’s  newest book, “Emotional Rescue: How to Work with Your Emotions to Transform Hurt and Confusion into Energy that Empowers You,” is a self-help guide for a broad audience.

Unlike his previous books, such as “Mind Beyond Death” or “Rebel Buddha,” this one is written for a more Western readership, with little direct reference to Buddhist teachings or concepts. 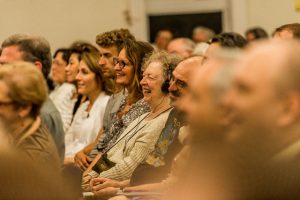 People were rapt, and amused, during the weekend teachings in Seattle.

When Dzogchen Ponlop Rinpoche speaks or writes about emotional pain and confusion, he doesn’t set himself up on a teacher’s superior pedestal. The roller coaster of emotions is universal, without religious or secular boundaries, so he includes lightly-humorous stories about himself, making it clear he is not immune.

“My challenges set me on a journey to understand the power of our emotions – the power to create happiness or suffering,” he said at a May 20-22 book teaching at Seattle’s Nalanda West, the headquarters of his international Nalandabodhi organization.

The Seattle event was Ponlop Rinpoche’s final stop on a book tour that began April 4 in Philadelphia at Temple University, and included teachings in Halifax, N.S.; Washington D.C.; and New York City.  Organizers reached out to universities, therapists, educators, yoga communities, and health and well-being groups, in addition to Buddhist audiences. 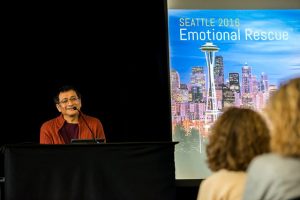 “Just think what our life would be like without any emotions. Pretty boring, right?” he said to the Seattle audience. “Emotions are like the fizz in the soda. Who wants a flat soda? Nobody enjoys flat soda. So who can enjoy life without emotions? … [Emotion] kind of sparkles our life, and brings us fizz in our life. Without the emotions, our life would be pretty flat.”

But some emotions – anger, jealousy, passion — can cause heartbreak.  So Ponlop Rinpoche has crafted a three-step “emotional rescue” plan to help us recognize and transform our habitual emotional patterns. The goal is learning to recognize how our thoughts, labels and story-spinning can pollute our emotional energy, so we instead can tap into its innate creative and healing powers.

The book’s genesis was a seminal teaching on emotions that Ponlop Rinpoche gave in 2006 at the 15th Annual Treasury of Knowledge Retreat in San Antonio, Texas.  He expanded on that teaching during subsequent events, including a talk at Tibet House in New York. 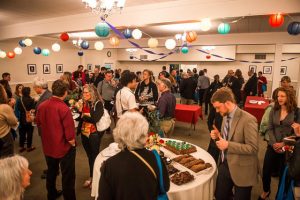 “Emotional Refuge” pulls together those original teachings, augmented with fresh material, including an assortment of practical exercises and contemplations spread throughout the book.  Some of the exercises were crafted in recent years by Nalandabodhi mitras (senior teachers) as part of the organization’s “path of activity” curriculum, which applies the Tibetan Buddhist teachings to daily life.

“Ponlop Rinpoche brings the essence of what Buddhism aspires to be – not just as an academic, and not just as a teacher, but as a full human being,” Kranzler said, as he introduced Ponlop Rinpoche to the audience. He marveled at Ponlop Rinpoche’s broad interests and talents:  he’s an artist, poet and photographer; he’s tech savvy; and he loves music and pop culture.

“What’s fascinating is how he translates really difficult Buddhist teachings into a secular, easy-to-understand, practical roadmap to understand and address our emotions.” 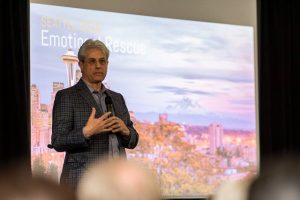 The event itself felt more Western than Buddhist. Gone were the floor mats and cushions, replaced with formal rows of chairs. A velvety black curtain completely obscured the marble shrine with its golden statues of Buddha, Guru Rinpoche and Green Tara. Guests at the Friday night public talk were given the rare instruction to not remove their shoes. And a large video screen displayed a colorful and often amusing series of images to illustrate Ponlop Rinpoche’s teaching points.

Both the book and live teachings are rife with Ponlop Rinpoche’s trademark pop-culture references – Facebook, video games, reality T.V., Dr. Doom. Even the book’s title brings a knowing smile to students who are familiar with his fondness for the Rolling Stones. (For the record: he doesn’t care much for the Stones’ hit 1980 disco-flavored album, “Emotional Rescue.”) 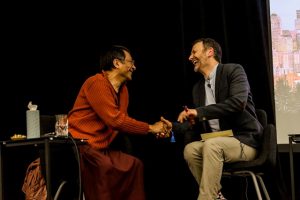 Ponlop Rinpoche and Brad Lichtenstein, a Bastyr University professor and a naturopathic physician, shared a Q&A near the end of the Friday night public talk. (Brad asked, Rinpoche answered.)

The three-step plan, in brief:

During a break in the teachings, Seattle resident Adrienne Cochrane vouched for the power and usefulness of the three-point plan. She learned the techniques when she attended the 2006 Texas retreat, where she first met Ponlop Rinpoche.

“I have such a deep appreciation,” she said. “Two months after retreat, I had a gripping emotional situation where I used mindful gap, and it actually worked. It was so exciting. That’s when I realized, this is really helpful.  It helped me deal much more skillfully with a really intense situation that could have escalated.” 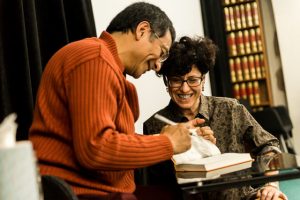 Ponlop Rinpoche signs a book for one of his students, Sarah Plotkin, who traveled from San Francisco to attend the weekend teaching.

Also in attendance was Lara Flynn, of Shoreline, who teaches at the ACES alternative high school in Mukilteo. She won a scholarship to the weekend event from co-sponsor Compassionate Action Network. Her application referenced her school’s recent loss of a student who died in a December gang-related shooting.

“That was one of the most difficult emotional experiences for us collectively to deal with,” she said. “I felt at that time a little bit at a loss to figure out how to help my students process that.”

Flynn added that she’s hoping to create some curriculum, using Rinpoche’s material, which students could practice and work with.

“I’m taking away a great deal of knowledge, in terms of accepting and holding and honoring an emotional experience without needing to push it away or deny it or fix it,” she said.

That’s the sort of response Ponlop Rinpoche hoped his teachings might engender.

“As long as we decide that we want to free ourselves and fulfill our potential for happiness, we have the power to do it,” he said. “Because already it is there. You’re fully equipped with your genuine power and wisdom.”

3
SHARES
Share
Posted Under: 2016, Dharma Healing, Arts, Summer
About the Author: Diane Brooks
Diane Brooks has been studying and practicing meditation and energy work since the early 1980s. She has been on a Buddhist path since 2005, studying with Dzogchen Ponlop Rinpoche, her formal teacher since 2010; John Tarrant Roshi; and Joel and Michelle Levey. She is a former newspaper journalist, writing for SF Bay Area papers and the Seattle Times, and now balances communications work with teaching yoga at Everett Community College.