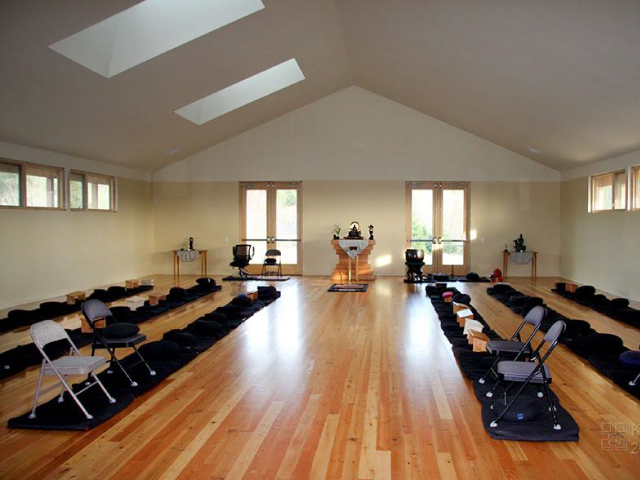 Portland’s Dharma Rain Zen Center invited the larger community to join them during May, as center members celebrated the opening of their new meditation hall. 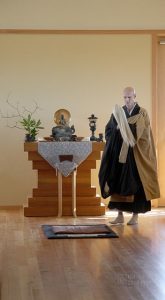 Kakumyo Lowe-Charde at the beginning of a year of preparations, to be formally installed as co-abbot.

The event celebrated the dedication and generosity of the sangha, which has supported development of the new property at 8500 NE Siskiyou Street in Portland.  Many compassionate and openhanded donations made this development possible, a tangible demonstration of the Dharma Rain sangha’s dedication to Zen practice.

The new temple building, traditionally called a Sodo, was modeled after Zen temples in Japan.  The complex contains a large meditation hall with skylights and high windows, which allow views of the trees outside without adding distractions.  A covered walkway around the entire building is available for walking meditation in the traditional style.

Additionally, the community can share meals, discussions or teachings in a large kitchen and dining gathering area. A Japanese garden in front of the Sodo includes traditional components and frames a courtyard that will eventually include residences and the ceremonial hall.  What the existing building provides, and the new buildings will augment, is a sense of calm and beautiful spaciousness with room for multiple activities to support our practice together. 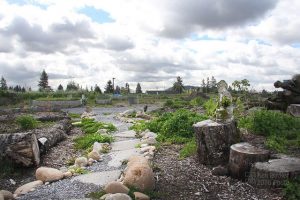 The path from the orchard, at Dharma Rain Zen Center.

Meditation during May included both silent walking and sitting, the latter facing the wall in accordance with our Zen tradition, although any style of meditative practice was welcomed during the month.

But while we deeply value and respect our specific forms of practice, Dharma Rain did not limit events to our own tradition during the May Sit.  We recognize the establishment of our new temple complex represents an important step establishing Buddhism in the West, and so we invited teachers from many different Buddhist traditions to offer teachings during the May Sit. 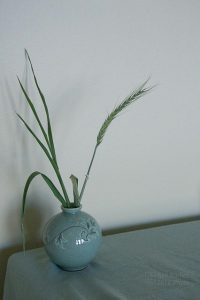 These included offerings from several teachers in the Vipassana tradition, as well as from other teachers from the Zen tradition.  Others offered lessons in Chinese calligraphy, Japanese gardening, the way of tea, and yoga.

Many of the Dharma Rain lay teachers gave dharma talks or made other offerings during the month.  Meals were offered for a donation.

According to the abbots’ vision, Dharma Rain emphasizes cultivating and supporting lay practice, while also providing opportunities for ordination and monastic practice.  Multiple offerings for lay practitioners range from basic classes on meditation to more advanced studies of our ancestral lineage and history, the teacher Dogen, and the wisdom liturgy. 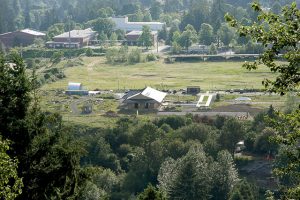 The new hall is surrounded by space for growth, and is buffered from the noise of the city.

In addition to the ordained teachers, a strong cohort of lay transmitted teachers gives instruction to the sangha.  We maintain a prison program across the state where incarcerated sangha members can practice together.  We also have a strong program for children, including a dharma school for ages 3 through high school as well as a popular dharma camp in the summer.  Finally, the new property has provided the space to offer Montessori education for pre-school, which has been a long-standing aspiration.

According to our abbot Gyokuko, one of the deepest aspirations of the Dharma Rain temple is the expansion of practice beyond simple sitting, to a focus on relieving individual suffering that takes our practice into the world and makes something good happen for the larger community.  She reminds us often that the new temple complex provides a tremendous opportunity to realize this aspiration, to benefit the sangha, children, and the environment. 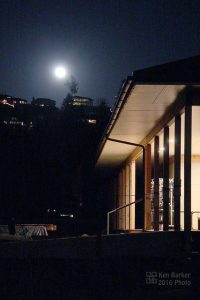 The moon outside the Sodo, Dharma Rain Zen Center.

The new center is already providing expanded space for sangha practice in the new Sodo, for continuing the dharma school education that children and young people in the sangha have participated in for many years. Other education opportunities include classes from Madison High School and Portland State University, which make good use of the outdoor classroom on the property to study ecological science and remediation of disturbed land.

Additionally, many volunteers have been doing environmental work on the land. This includes removing invasive ivy and blackberry and planting native plants, caring for the hundreds of trees growing in the orchard and elsewhere. As a community we’re treating storm water in the ravine, while we’re growing mushrooms to remediate the residual effects of the underlying landfill.

Finally, as is traditional in Japan, we’re offering community people access to the property’s natural areas, through a network of trails and open access to temple grounds.

We hope many people benefited from the May sit, which expressed our gratitude to all our donors who help us realize this vision.

1
SHARES
Share
Posted Under: 2016, Sangha News, Summer
About the Author: Valerie Kaishin Kelly
Since 2009 Valerie Kaishin Kelly has been a member of Dharma Rain Zen Center and a student of Gyokuko Carlson. Prior to that Kelly studied with Chozen Bays at Zen Community of Oregon. Kelly has also been practicing in the Tibetan Vajrayana tradition with Eric Marcoux since 1996. In 1983 she started on the spiritual path as a follower of a Native American teacher who also is recognized as a lineage holder in the Tibetan tradition. Kelly’s eclectic approach to Buddhist practice has been a rich and joyful path.