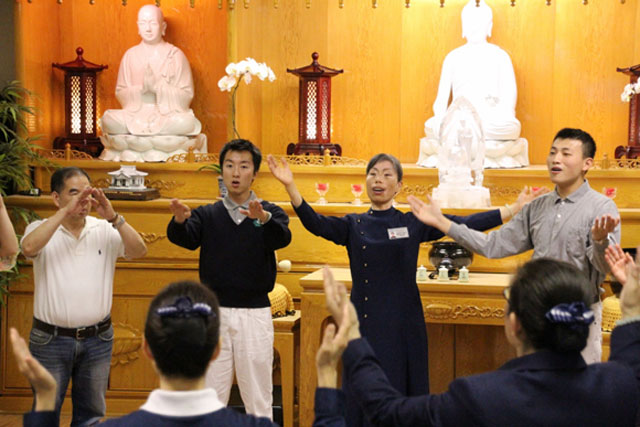 Commissioner Ru Yi Hsieh (center, in blue uniform) leads a group of new volunteers in singing the “I Jia Ren” (All Family) song at the Tzu Chi Foundation office in Kirkland, Wash.
Photos by: Steve Chen

This is just one of the myriad charity, education and disaster relief activities carried out by Tzu Chi Foundation, a Taiwan-based organization active around the world, with a strong presence in the Seattle metro area.  Seattle Tzu Chi operates offices in Seattle’s International District, and in Kirkland, east of Seattle.

During the dragon fest, doctors, chiropractors, nurses and acupuncture volunteers from the Tzu Chi International Medical Association answered people’s questions about health, from tables set up inside the Tzu Chi Chinatown office.

The local chapter of Tzu Chi has a core membership of around 20 volunteers, mainly Taiwanese, though non-Chinese speakers are always accommodated with translators.  The local chapter performs many activities of tangible compassion around the region. 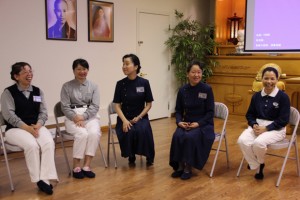 Commissioners Hsiang Fong, and Su Wei (in blue uniforms) of the Tzu Chi Foundation lead a discussion-and-sharing session with new volunteers, beneath a picture of Buddhist Master Cheng Yen, founder of Tzu Chi.

For instance, Seattle Tzu Chi sends volunteers to area nursing homes to bring love and connection to the elderly, and also sends people to visit the elderly in their homes.

Local Tzu Chi volunteers regularly help at area food banks, serve food at tent city shelters, and distribute blankets and clothing to homeless people. The organization also has a program of individual relief, helping people who are coping with difficult moments in their lives.

On a larger scale, the local chapter contributes to Tzu Chi’s global activities during disasters, mobilizing to send food, supplies and trained people where they’re needed.

For instance, after joining Tzu Chi International Medical Association as an acupuncturist, I joined a team of medical volunteers who went to  Haiti after the earthquake in 2010. That event left more than 300,000 people dead, and an already extremely impoverished nation’s capital in rubble.  The experience was a pivotal spiritual moment in my life, turning me toward concrete and human expressions of compassion, rather than just cultivating compassion on the cushion. 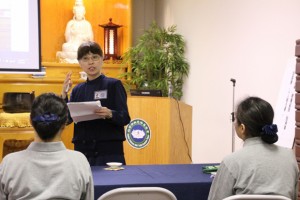 “Tzu Chi” means “compassion relief” in Mandarin Chinese, and expresses the central philosophy of this international NGO (non-governmental organization). Tzu Chi was  founded in 1965 by Master Cheng Yen, a revered Buddhist nun who collaborated in the effort with five monastic disciples and 30 housewives.

As told in Venerable Cheng Yen’s biography, after leaving home and ordaining at age 23, she was living in Hualien, then a rural area of south central Taiwan suffering from post-wartime poverty. Some Catholic nuns at that time asked her, “While it is true that Buddhism and Catholicism both teach love and compassion, why is it that there are no Buddhist hospitals, nursing homes, and orphanages?”

This struck a chord in the young nun’s heart and she began asking her followers to collect one penny a day for charity. But she also taught that instilling a daily practice of love, kindness, and generosity in donors, was as important as raising the actual funds for social welfare projects.

Today, Tzu Chi is one of world’s leading international disaster relief organizations, able to quickly mobilize volunteers for search-and-rescue anywhere in the globe, and ship emergency food, clothing and medical aid stations where they are needed. The organization also engineers new technologies to help others, such as making instant brown rice without chemical preservatives (50 tons were shipped to Japan after the earthquake and tsunami last March), and creating lightweight and warm blankets from recycled pop bottles. 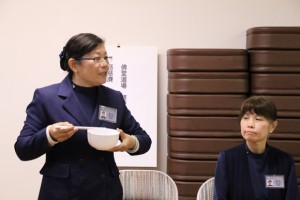 Throughout all of this, volunteers strive to always bring a healing presence of love and compassion to those struggling amidst extreme trauma and social upheaval.

As a Westerner who discovered Buddhism in my early 30s, I was initially attracted to the wisdom technology of meditation – ancient and sophisticated techniques geared towards leading the mind to an understanding of truth.  The ideals of the bodhisattva (Sanskrit: one who is dedicated to full awakening of the mind in order to be of highest benefit to others) inspired me to spend long hours observing my breath and stilling my thoughts, which led to momentary experiences of bliss and peace.  But something was missing – like a bird trying to fly with a broken wing. My compassion was dry and intellectual for the most part.

Living in a relief camp in Haiti, offering acupuncture for people physically and mentally scarred by the earthquake, opened my heart to the importance of love and service as part of Buddhist practice. Returning from Haiti, I began to ask myself questions about why a 7.0 earthquake in Haiti had resulted in over 3 million deaths, while an earthquake in Chile months later measuring 8.8 (almost 100 times more powerful) had resulted in just 525 deaths. The easy answer was building codes.

However, as I dug deeper in my quest for understanding, it brought into focus the differences between a country riddled with poverty and a history of racial oppression dating back to the slave trade, and a country with few of those problems. 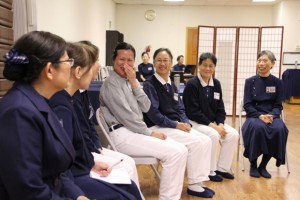 As a white Buddhist with all the privileges of growing up as a member of the dominant race, I could not accept the role of hero for spending a mere seven days offering acupuncture in Haiti.   The truly heroic and spiritually noble thing to do would be to work to prevent future disasters – including notably the daily disasters of poverty and racial oppression that were at the root of this great tragedy – even though these issues rarely make the headlines of mainstream news.

So I began to think and act more on issues of social justice, not merely confining my spiritual practice to a cushion in a quiet room. For instance, last summer I joined a Tzu Chi team of volunteers working at the King County Jail, teaching meditation to work-release inmates.

Learning to give appropriately, the first of the “six perfections” in Mahayana Buddhism, is central to the path of service for any Tzu Chi volunteer.

This year in April, I visited Taiwan with my wife and daughter. While my wife volunteered in the Tzu Chi hospital in Hualien for four days, I chose to take my daughter on a mountain climb in one of Taiwan’s  beautiful national parks.

Later, when I met Master Cheng Yen at the Temple of Still Thoughts, she asked me how my hike was and commented on how beautiful Taiwan’s natural scenery is. Then she added that the scenery of the bodhisattva mind is far more beautiful.

With a tone and gaze that was at once somewhat stern and yet radiating love, wishing me to actualize the highest happiness of the enlightened mind, she told me: “Next time you come to Taiwan, it would be better if you volunteered your time at the hospital.”

0
SHARES
Share
Posted Under: 2012, Fall, Sangha News
About the Author: Jordan Van Voast
Jordan Van Voast is a member of the Tzu Chi International Medical Association, and also serves on the board of directors of the Dharma Friendship Foundation in Seattle. He is co-founder of CommuniChi Acupuncture, a community acupuncture clinic in the Beacon Hill neighborhood of Seattle.