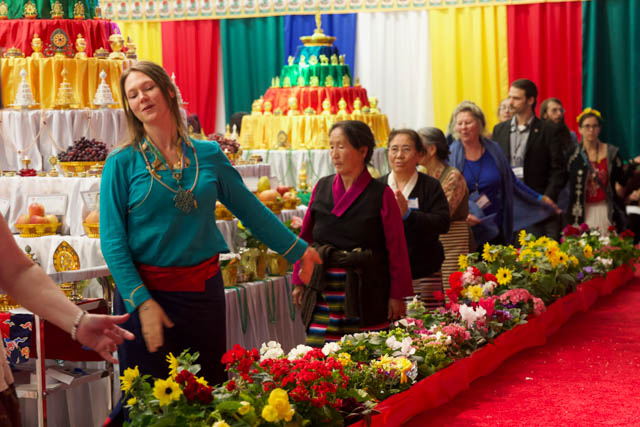 Entitled “The Grand Blessing Ceremony of the 10,000 Offerings to the 21 Noble Taras,” the three-day 2018 ceremony was conducted by His Eminence Dzogchen Khenpo Choga Rinpoche. He is a renowned Tibetan meditation master, scholar and author and was assisted by the International Dzogchen Buddha Path sangha. 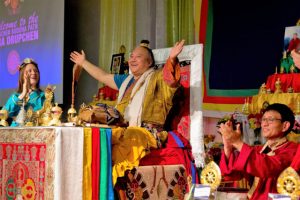 Khenpo Choga Rinpoche had long aspired to unveil the Tara sadhana and to hold a three-day public practice devoted to the happiness of all beings and the fostering of world peace.

The event was breathtakingly beautiful, with 13 large-scale offering mandalas, some 10 feet wide and more than 10 feet high, constructed especially for the ceremony. Generation of the mandala, as well as its dissolution, constituted a wonderful additional aspect of practice for the Tibetan community in Portland, as well as for practitioners and volunteers gathered from around the world. 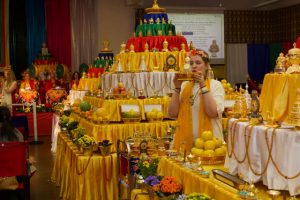 The event was conducted in English and Tibetan based on the beautiful sadhana – a Buddhist written liturgical text – compiled, written and translated by His Eminence. It was a rare opportunity for the 200 to 300 daily attendees to participate in such a drupchen.

A drupchen, or “great accomplishment,” is a powerful Buddhist practice and ceremony performed over many days, designed to utilize the pure view and skillful means of Tibetan Vajrayana Buddhism to achieve results on the path to enlightenment. Because of the group accumulation of power, participating in a drupchen is said to produce results similar to many years of solitary practice.

Drubchen practices date back centuries, and are renowned for producing many enlightened beings during Tibet’s rich Buddhist history. Today drupchens are primarily held in monasteries in India, Nepal and Tibet, and are seldom witnessed by Western lay people. 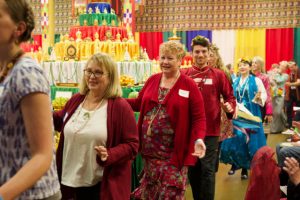 It took 65 volunteers two full days to assemble the mandalas, decorate the auditorium and arrange the offerings. The hall was literally transformed into a pure realm of color, scent, music and prayer. After the practice was done the volunteers disassembled the mandalas within 24 hours.

The main purpose of creating such an incredible temporary display is to support the positive thinking of the participants. Through powerful practice they can dismantle negative thinking and increase virtuous thinking, then going into the world to be agents for world peace and happiness.

In Tibetan Vajrayana practice, offering is considered one of the seven main methods of accumulating merit on the path to enlightenment. In the offering practice we offer to Buddha not because Buddha needs anything, but as a mind training for the practitioner to antidote greed, and chasing and clinging to mistaken causes of happiness outside ourselves. 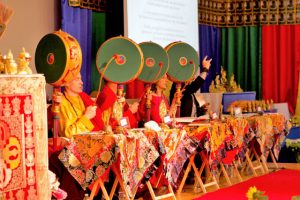 Because our thinking is powerful, we can imagine even a small grain of rice to be an entire vast universe. By offering this to Buddha all beings benefit, because offering to Buddha is like offering to all beings.

The goal of the Tara Drupchen was making 10,000 offerings to the 21 Taras. In Tibetan Buddhism Tara is considered the mother of all Buddhas, especially in her manifestation as Green Tara. She is the Buddha of compassion and action, the protectoress who meets our needs when we have physical suffering, spiritual angst, anxiety, fear, worry or obstacles.

Tara has 21 major forms or emanations, each with a different color and unique attributes to respond to the type of suffering. Tibetans love to recite her mantra “Om Tare Tuttare Ture Soha,” and Buddhists all over the world call out to Tara when they are in pain and fear. 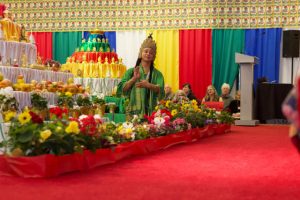 Each day of the Tara Drupchen included prayer, visualization, mantra recitation and chanting, mudra, and dance set to beautiful music. These were interspersed with inspirational teachings and presentations, priming the participants to make heartfelt offerings and aspirations at the mandala.

On the third day of the practice, the gathering built up a crescendo of positive feeling that culminated in several hours of individual offerings to the mandala. Many attendees were inspired to dance around the mandala and many more made offerings, assisted and taught by the ritual offerers called chödpöns, and by lamas gathered from the Dzogchen Shri Singha national and international sanghas. 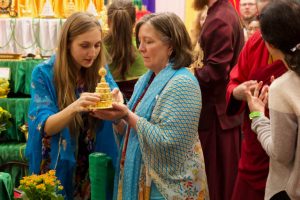 Prajwal Vajracharya and three dancers from Dance Mandal Temple in Portland, Foundation for Sacred Buddhist Arts of Nepal, also made simultaneous offerings of the Green Tara dance on all four sides of the mandala in an incredibly heartfelt and moving presentation. On the final day the women of the Northwest Tibetan Cultural Association offered a traditional Tibetan circle dance around the mandala, a joyful culmination of this unique multicultural event.

In an age of increasing skepticism and doubt about our institutions and the state of our world, many participants reported an increase in their positive thinking and a complete change of their mundane perspectives to a more optimistic outlook. Many vowed to take the inspiration of Mother Tara’s blessings back to their home cities, to antidote harm and heal wounds.

63
SHARES
Share
Posted Under: 2018, Dharma Healing, Arts, Fall, Featured On Home Page
About the Author: Carrie Ure
Carrie Ure (Upasika Bodhisattva Padma Zhenpen Tso) is a longtime practitioner and authorized dharma teacher of the Buddhist path under the guidance of H.E. Dzogchen Khenpo Choga Rinpoche. Ure is a founding board member and past president of Dzogchen Shri Singha of Portland. She is also secretary of Dzogchen Shri Singha Foundation, the lineage’s international organization. Ure has taught at the Dzogchen Retreat Center U.S.A., and teaches weekly at the Portland Dharma Center. In April she served as event director for the Grand Blessing Ceremony of the 10,000 Offerings to the 21 Noble Taras in Portland.